VATICAN CITY (RNS) — Entering the final days of a monthlong debate over how to engage young people, a global meeting of Catholic bishops, other church officials and several dozen young Catholics is facing the dicey task of drafting a final report. The challenge will be to incorporate the wide array of difficult issues raised here while still getting two-thirds of the body to approve the document.

Topics that have so far been pitched during the meeting, known as a synod, run the gamut from the controversial, such as addressing the clergy sex abuse crisis and figuring out how to welcome gay people, to the commonsensical, such as embracing digital technology to better reach young people and spread the gospel.

Other issues raised in closed-door discussions in a Vatican lecture hall and in small language groups sessions include proposals on the migration crisis and climate change, drug addiction and unemployment, the influence of the occult and the search for happiness, developing better liturgies and getting young people involved in outreach to the poor and marginalized.

There has even been a push to allow women — who, like the young people in attendance, can participate in the discussions but have no vote on the final proposals — to be able to cast ballots in a future synod. That hot potato that will wind up in the hands of Pope Francis, who convened this synod and has sat in on most of the debates.

But a gathering that can hardly agree on whether to even use the term “gay” or “LGBT” may be hard put to forge consensus from nearly 270 bishops and cardinals, plus 72 non-voting observers, all from dozens of countries representing a global flock of 1.3 billion Catholics — much less produce a prophetic document with punch, rather than a collection of glittering generalities.

The two-thirds threshold needed to pass each of the synod’s propositions tends to favor vague wording rather than clear pronouncements.

That truth favors the conservatives here, who have been critical of the open dialogue Francis has called for. They say the synod’s approach shortchanges doctrine and encourages “an overdose of sentiment, accommodation, and sociology,” as Philadelphia’s Archbishop Charles Chaput put it in a sharply worded column published on the eve of the synod’s Oct. 3 opening.

“There seems to be a Babel-like quality coming from this youth synod. People are talking about migrants, and women’s rights and LGBT rights and [the] environment and populism,” Raymond Arroyo, a popular host on the conservative Catholic cable outlet EWTN, said last week (Oct. 18). “What is the real goal of this synod?” 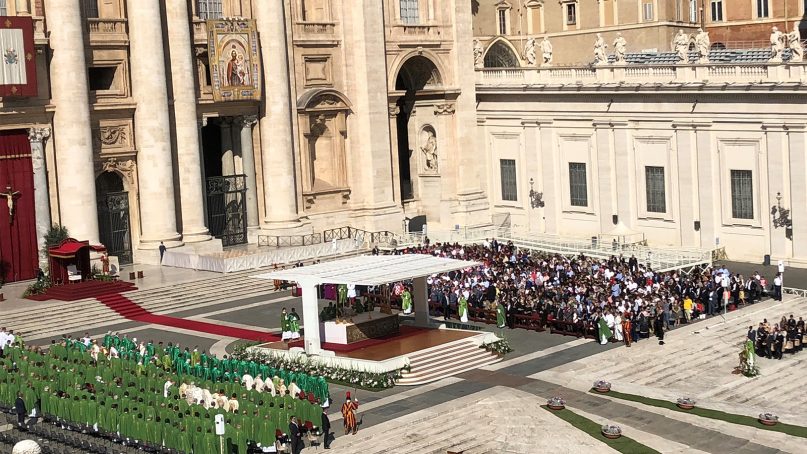 Pope Francis leads a Mass opening the Synod of Bishops on Young People on Oct. 3, 2018, in St. Peter’s Square at the Vatican. RNS photo by Tom Reese

One answer may be that the synod, which concludes on Sunday (Oct. 28), is not so much about the final report’s recommendations as it is a part of the deeper reform process that Francis launched after his 2013 election. It may be enough in some participants’ view if the summit encourages an open exchange of ideas and experiences, in an effort to transform the church into a more collegial, collaborative and participatory communion of all believers, not just prelates sending out commands from on high.

That frank discussion was the hallmark of two previous synods, in 2014 and 2015, that created an opening for divorced and remarried Catholics to receive communion under certain circumstances.

“Just like the two previous synod assemblies on the family, Pope Francis has made this current assembly on youth yet another necessary juncture on the road toward radically reforming structures of ecclesial governance and effecting a ‘conversion’ of the papacy itself,” wrote Robert Mickens, editor of La Croix International, a leading Catholic news outlet.

“In short, it is about the more arduous — and controversial — process of making true synodality a constituent part of the Church’s life and decision-making structures,” Mickens wrote in an Oct. 19 column.

True synodality in this sense requires church leaders to learn to listen as much as they teach. At this meeting, some 30 young people sit in on the discussions and speak out and even whoop it up when they hear something they like — a sharp break from previous pontificates, in which synods were highly scripted, stultifying affairs for bishops only.

“We are a sign of a church that listens and journeys,” Francis told delegates in his opening address to the synod. “The path of preparation for this moment has highlighted a church that needs to listen, including those young people who often do not feel understood by the church in their originality and therefore not accepted for who they really are, and sometimes even rejected. This synod has the opportunity, the task and the duty to be a sign of a church that really listens, that allows herself to be questioned by the experiences of those she meets, and who does not always have a ready-made answer.”

That is a radical notion for many contemporary Catholics, and it is a model of the church that unsettles many conservatives.

In the run-up to this synod, the pope also had the Vatican post an online survey soliciting input from young people around the world, non-Catholics as well as nonbelievers. He invited many respondents to a pre-synod confab with him in Rome in order to get as wide a range of views as possible.

“Clearly there’s a thrust almost toward a democratization of the church,” Robert Royal, a Catholic commentator and president of the Faith & Reason Institute in Washington, D.C., told Arroyo on the EWTN broadcast before coming to Rome.

“But the church is not a democracy,” Royal said. “It simply cannot be the case that the church becomes a debating society.”

Whatever becomes of Francis’ long-term vision, it’s a safe bet that for the rest of this week, at least, the debates will continue. The result will have to contain something that speaks to the young people and doesn’t just please one side or the other of the church’s political divide.

Young people are tired and bored and they want a synod document that reflects the real world of today, Safa al Abbia, a 26-year-old Chaldean Catholic from Iraq, told Vatican News. The young Iraqi dentist received a huge ovation after he recounted his experience in war-torn Iraq to the synod assembly, and when he spoke about the challenges young believers face around the world.

But al Abbia said while it’s important that the church listens to people like him, young people are also impatient and want results.

“We need a fast response,” he said.