It started when a man decided to stay up late and update his status, posting 95 things on his wall. He hoped his friends would like, comment on or share them.

Instead, as so often happens on Facebook and other social media platforms, a lot of people started arguing.

“Little did he know, the church would unfriend him,” Bridges said.

That man was Martin Luther. His post — the 95 theses the German monk-turned-reformer reportedly nailed to the Castle Church door in Wittenberg, Germany, on Oct. 31, 1517 — kicked off the Protestant Reformation.

Bridges’ retelling of the start of the Reformation kicked off “Luther: The Rock Opera,” an hourlong romp featuring 24 upbeat songs performed by Bridges and bandmate George Baum against the backdrop of about 300 illustrations from “Luther,” the graphic novel by Rich Melheim. Bridges and Baum retired from touring three years ago after performing together as Lost and Found for 25 years. Then Melheim, a friend of the band, suggested they write a rock opera to accompany his graphic novel.

“Luther: The Rock Opera” debuted to about 600 people last year at the Stadthaus Theater in Wittenberg. This fall, Lost and Found brought performances to five cities across the Midwest.

On Reformation Sunday (Oct. 28), Lost and Found ended its mini-tour at St. Paul Evangelical Lutheran Church, a Lutheran Church-Missouri Synod congregation in the south suburbs of Chicago that stands across the street from its original building, dating back to the 1800s. Out front, a banner advertised its “Trunk or Treat” event on Halloween, also celebrated as Reformation Day.

St. Paul member Paul Szymanski, a lifelong Lutheran who has seen Lost and Found 10 to 15 times in concert, said he jumped at the chance to bring the band’s rock opera to the church.

“They’re a really different style, and their lyrics are very theologically Lutheran, which is cool, and they’re deep and they have a lot of meaning — they just relate to the traditions I grew up with,” Szymanski said.

The rock opera included an energetic rendition of Luther’s most famous hymn, “A Mighty Fortress Is Our God,” rapped segments capturing Luther’s clashes with Roman Catholic leaders and an unexpectedly poignant song inspired by a quote attributed to Luther:

“If I knew that the world would end tomorrow
I would plant a tree today
There is hope amid the sorrow
And joy along the way
There’s a world in every moment
And a moment when we find
That the Tree of Life is growing all the time.”

Bridges hopes others will reproduce the rock opera on their own — maybe in a choir performance on Reformation Sunday, he said, or a confirmation class project.

“We hope people will see it, and they’ll say, we could do that. And they could,” he said.

The Reformation still resonates today for both Christians and non-Christians, he said, because Luther “spoke truth to power.”

“What, to me, is really meaningful about this whole story, what’s meaningful about doing the rock opera, is that this solitary monk speaks three words — ‘Here I stand’ — and helps the world — Western civilization, at least — move from the medieval to the modern age,” he said. “He brought into existence some of the things that we value today by standing up to the authorities.” 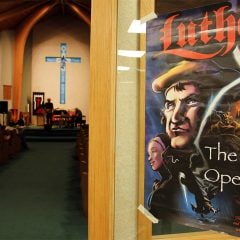 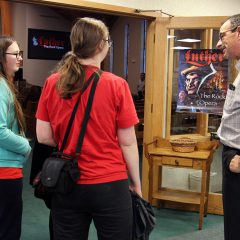 Last year, Lutherans and many other Protestants the world over celebrated the 500th anniversary of the start of the Protestant Reformation, marking the date Luther posted his 95 theses.

But that was just the beginning of the celebration, Bridges said.

“I cannot and will not recant anything, for to go against conscience is neither right nor safe,” Luther reportedly said. “Here I stand. I can do no other, so help me God.”

And, Bridges said, “The Reformation continues.”

Some of the nearly 100 people who filled the pews at St. Paul were Lost and Found fans who owned every one of the duo’s albums and recounted bittersweet memories of the farewell tour that had stopped several years before in the Chicago suburbs.

Others, like Jean Holcomb and her friends Lee Burnett and Nancy Stumbaugh, were drawn to church by the novel retelling of the story of the start of the Protestant Reformation.

The trio are members of Trinity Lutheran Church in nearby Tinley Park. Dressed in Martin Luther fan gear — a sweatshirt celebrating last year’s 500th anniversary of the Reformation, a souvenir T-shirt from Wittenberg, a necklace engraved with a Lutheran cross — they recounted their own travels across Germany ahead of last year’s anniversary celebrations. 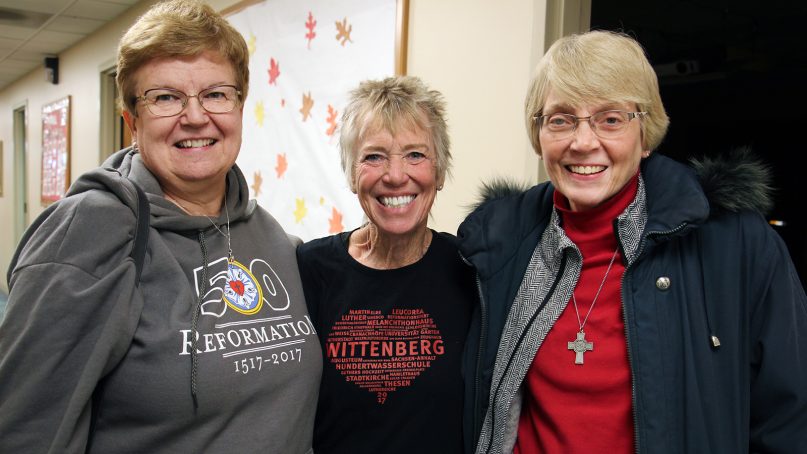 The rock opera brought back all those memories.

“We did the whole Lutherland tour, and all those castles and the sights and everything are still fresh in my mind,” Holcomb said.

She and her friends also thought the lyrics and illustrations captured all the important parts of the story of the Reformation.

“It told the whole story in such a humorous, fun way,” she said.