PARIS (RNS) — The head of the world’s Orthodox churches has thrown down the gauntlet to Moscow, risking a split in eastern Christianity after its rich and powerful Russian branch repeatedly supported controversial Kremlin policies and blocked church unity in Ukraine.

Faced with a stalemate among three rival churches there, Ecumenical Patriarch Bartholomew has declared all three of them valid and urged them to create one independent body for all Ukrainian Orthodox believers.

This step, an unusually decisive act in a very slow-moving church, promptly brought accusations of heresy from the Russian Orthodox Church, which has overseen Orthodoxy in Ukraine since 1686. Its Moscow Patriarchate also took the unusual step of breaking communion with the Ecumenical Patriarch.

The Moscow Patriarchate, which claims over half of the world’s estimated 250 million to 300 million Orthodox believers, warned that Bartholomew’s step could lead to the biggest division in Christianity since the Great Schism of 1054 separated the Greek-speaking East based in Constantinople from Rome’s Latin-speaking West.

On its face, the dispute is about who can decide whether Ukraine can have its own “autocephalous” or autonomous church — the Orthodox world’s spiritual leader in Constantinople (the name the Orthodox still use for the city that became Istanbul in 1453) or Russian Patriarch Kirill in Moscow.

The dispute is fueled by a long-simmering political power struggle that challenges a key element of Kremlin influence. The Ukrainian church is so important to Moscow that computer hackers linked to the Kremlin reportedly tapped into the email accounts of Bartholomew’s closest aides to find out what they planned to do about it. 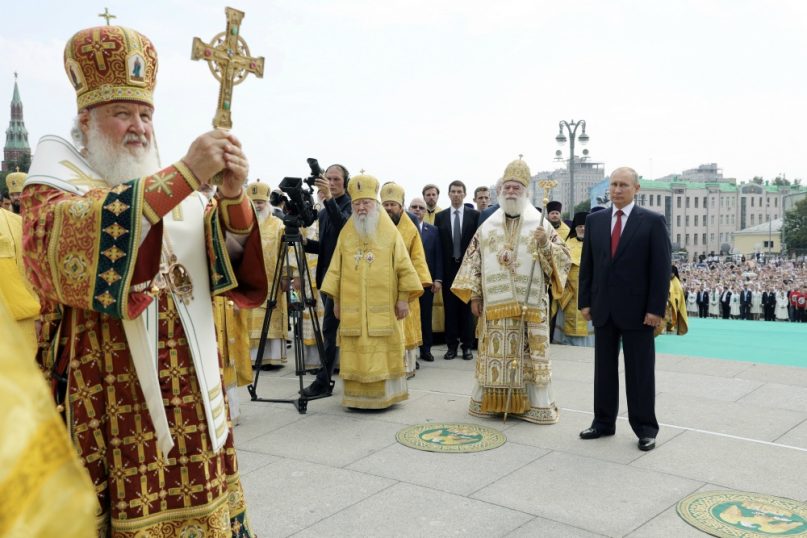 “Moscow has created this problem — they shot themselves in the foot by supporting (Russian President) Vladimir Putin, the proxy war in eastern Ukraine and the seizure of Crimea,” said Brandon Gallaher, an Orthodox theologian at the University of Exeter in Britain.

“If these things had not happened, this problem probably would have rumbled on for a long time more,” he told RNS.

Eastern Orthodoxy is a family of 14 independent regional churches that share communion and common doctrines. Unlike the pope in Roman Catholicism, the Ecumenical Patriarch is the spiritual leader of the churches but has limited practical authority over them.

One of his prerogatives is the right to declare a regional church autonomous, usually when a traditionally Orthodox country became independent of a larger neighbor.

The Ecumenical Patriarchate declared in April that it would do this for Ukraine and, after months of fruitless contacts with Moscow, reaffirmed that decision on Oct. 11.

The split in Ukraine has been brewing for over a quarter-century. When Ukraine broke free from Russia in 1991, some Ukrainian clerics set up their own Kiev Patriarchate to head a Ukrainian Orthodox Church independent of Moscow.

The Ecumenical Patriarchate stood by the Moscow church as the only valid Orthodox body in Ukraine, recognizing neither the new church nor a smaller local one re-established after being banned in the Soviet era.

But as the years went on, the Moscow Patriarchate alienated Ukrainian nationalists by moving closer to the Kremlin, openly backing Putin and receiving major contributions from Kremlin-friendly oligarchs. 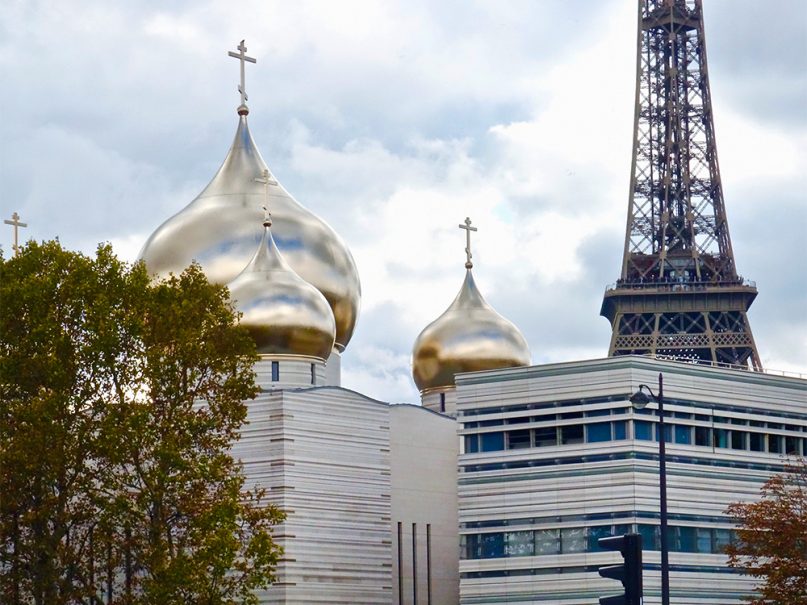 The Russian Orthodox Holy Trinity Cathedral opened in 2016 near the Eiffel Tower in Paris. RNS photo by Tom Heneghan

By refurbishing old churches and building new ones both across the former Soviet Union and around the world, the Russian Orthodox Church also helped Kremlin efforts to expand Russian influence at home and abroad.

One visible result of this drive is the gleaming new Russian Orthodox Cathedral opened in 2016 near the Eiffel Tower in Paris, where Moscow’s church has few followers.

When Russia seized the Crimean Peninsula from Ukraine in 2014 and backed Russian-speaking separatists in eastern Ukraine, Ukrainian nationalists stepped up their appeals for Constantinople to act.

The issue of uniting the three Ukrainian churches could have been discussed at a pan-Orthodox council that Bartholomew called in 2016 — the first such summit in 1,200 years — but the Russian church boycotted the meeting.

With Ukrainian President Petro Poroshenko and a majority of Kiev’s Parliament pushing for an autonomous church, the Ecumenical Patriarchate studied the issue and decided to put the unity of Ukraine’s Orthodox Christians first.

“It is unthinkable that the Ecumenical throne … remains inactive when Orthodox people suffer and seek a solution to church problems that have tormented them for centuries,” Bartholomew said. 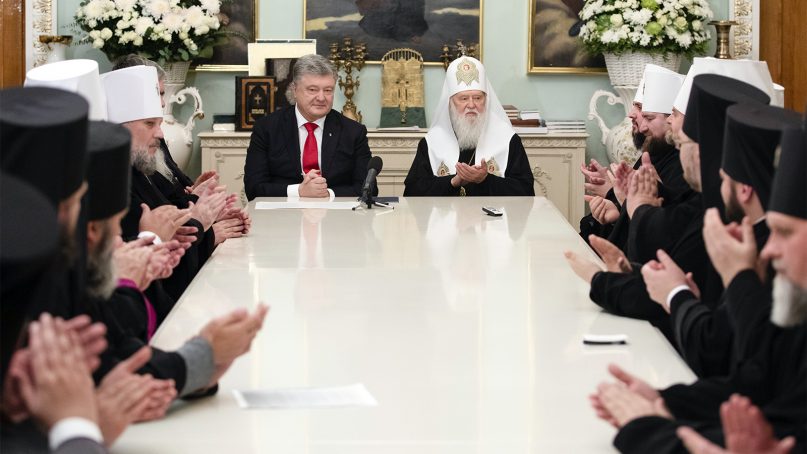 Ukrainian President Petro Poroshenko, center left, and Patriarch Filaret, head of the Ukrainian Orthodox Church of the Kiev Patriarchate, and clerics during their meeting in Kiev, Ukraine, on Oct. 21, 2018. The Istanbul-based Ecumenical Patriarchate says it will move forward with its decision to grant Ukrainian clerics independence from the Russian Orthodox Church. (Mikhail Palinchak, Presidential Press Service via AP)

The decision to recognize all three rival groups as valid is a gamble and its success is not guaranteed. Observers doubt the rival churches can agree to merge anytime soon into the new united body Constantinople wants to see emerge.

“The new church will not be the sum of the existing churches, but of the existing people,” the Rev. Cyril Hovorun, an Orthodox theologian at Loyola Marymount University in Los Angeles, told Hromadske television in Kiev. “We don’t know exactly when this will happen.”

By contrast, the political significance of the decision was immediately clear.

Metropolitan Hilarion, the foreign affairs director for the Moscow Patriarchate, denounced the move as “unlawful and canonically void” and said it amounted to “the self-liquidation of the Patriarchate of Constantinople as the coordinating center for the Orthodox Church.”

“Constantinople is now in schism,” he said, adding that the United States appeared to have played a part in the decision because of its support for Ukraine.

“The Moscow Patriarchate, unfortunately, seems to be hostage to the Russian state’s interests in the region, even if they claim the opposite,” Metropolitan Emmanuel, a top adviser to Bartholomew, said in an interview with the Athens daily Ta Nea.

Ukraine is the cradle of Christianity in what later became Russia, thanks to the baptism in 988 of Kiev’s Prince Vladimir, and losing it will be a spiritual, material and political blow to the Moscow Patriarchate.

How serious this blow will be is hard to estimate. Moscow claims to have more than twice as many parishes as Kiev in Ukraine. But a recent poll said 45.2 percent of Ukrainians support the Kiev Patriarchate while only 16.9 percent are loyal to Moscow.

Kiev supporters claim up to 30 percent of Moscow’s Ukrainian church will switch to the local patriarchate, bringing along parishioners, church buildings and monasteries. But nobody really knows.

Calls in recent months from both sides for calm reflect fears that disputes in Moscow-linked parishes over switching or staying could lead to violence.

“We can expect anything … (even) bloodshed,” Metropolitan Hilarion has said. 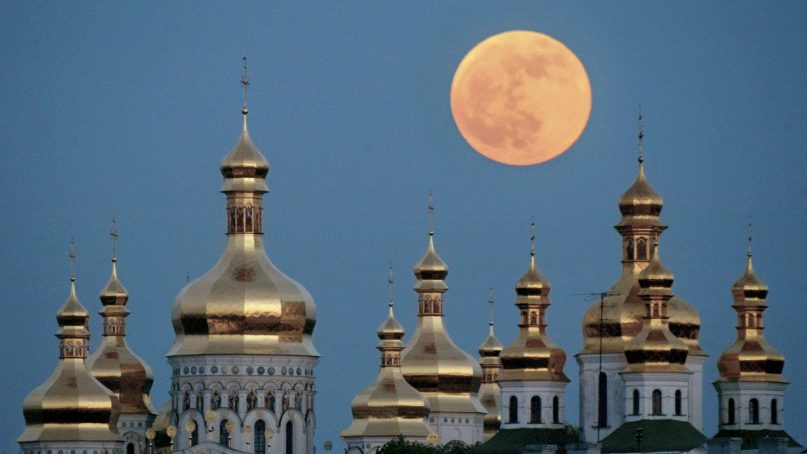 A full moon rises above the golden domes of the Orthodox Monastery of the Caves in Kiev, Ukraine, on May 4, 2004. Ukraine lobbied hard for a religious divorce from Russia. (AP Photo/Efrem Lukatsky)