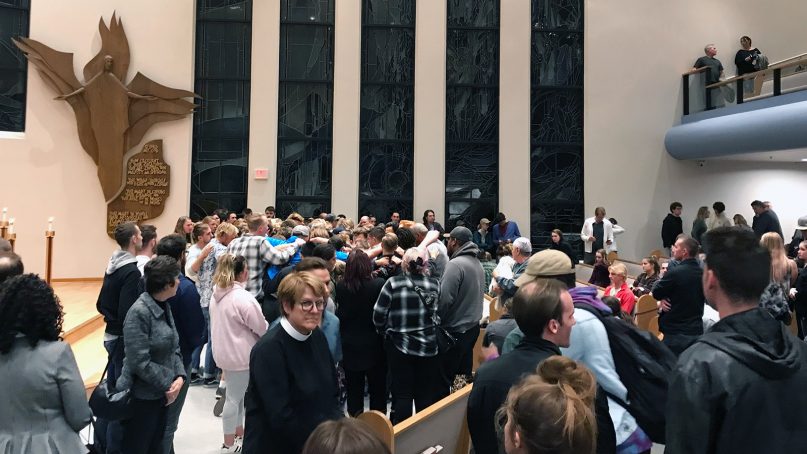 The California Lutheran University water polo team embraces Justin Meek’s family and other members of the Cal Lutheran community in a large group hug after a service of lament late Nov. 8, 2018, in Thousand Oaks, Calif. Meek, a recent graduate who was killed in the bar shooting Wednesday, played water polo at the university. RNS photo by Cathleen Falsani

THOUSAND OAKS, Calif. (RNS) — “Sovereign God, hear this lament: Why, Lord, has evil seemed to get its way?”

So began the litany of prayers offered by grieving students, faculty, friends and family who packed the chapel at California Lutheran University Thursday night, not quite 24 hours after a mass shooting in a nearby country and western bar claimed the lives of a dozen people, including 2018 Cal Lutheran graduate Justin Meek.

“What should never have happened has happened without our permission and we have been drawn into this terror,” the Rev. Scott Maxwell-Doherty, university pastor, told mourners, many of them young, their wide eyes rimmed in red. They huddled close in the wooden pews, holding hands, arms slung over shoulders as they struggled to process the enormity of the horror that has touched their community.

Like so many of the mass shootings that have become near-daily trauma to the American psyche, the massacre at the Borderline Bar and Grill in Thousand Oaks, Calif., happened in precisely the kind of place such things aren’t meant to happen.

While this city of 129,000 people sits just 40 miles northwest of Los Angeles, it bears little resemblance to its cosmopolitan cousin to the southeast. The Borderline is one of the few establishments in this sleepy suburb that even approximates a nightclub. It caters to a suburban clientele with relatively chaste entertainment options such as line dancing.

That’s what had drawn students from nearby Cal Lutheran and Pepperdine University — both Christian schools where on-campus partying is frowned upon — to a College Country Night on Wednesday when a gunman entered the bar shortly after 11:15 p.m. and opened fire.

More than a dozen Pepperdine students were at the Borderline when the shooting occurred. Eighteen-year-old Alaina Housley, a Pepperdine freshman from Napa, Calif., lost her life.

“We can be assured that there will be very few answers to the questions that bloom inside of us. And we can be assured that God will not leave us alone in those questions,” Maxwell-Doherty told those gathered to grieve at Cal Lutheran late Thursday. “Sisters and brothers, while our friends did not die separated from our love or the love of God, so we will not be separated from God while we grieve their deaths.”

Among the mourners in the university’s Samuelson Chapel were several young people, including current students who were inside the Borderline when the alleged gunman, Ian David Long, 28, a former Marine who had served as a machine gunner in Afghanistan, entered the bar, shot the bouncer, set off smoke bombs, and began emptying his .45-caliber Glock 21 with an extended magazine into the crowd. Long reportedly took his own life at the scene. 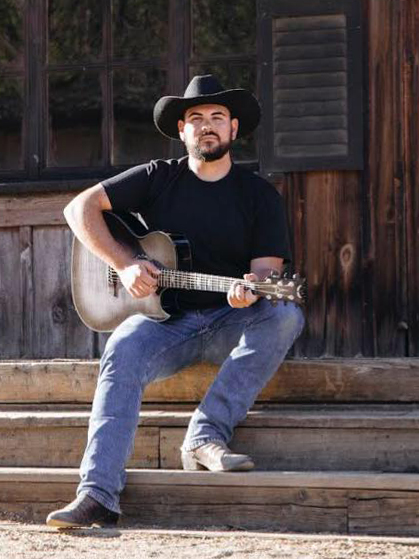 So far, no clear motive for the mass shooting has emerged.

Even if the reasons were obvious, it wouldn’t matter, because it is impossible to make sense of the senseless, said Rabbi Belle Michael, Cal Lutheran’s campus rabbi, who co-presided at the service of lament and a campus vigil earlier Thursday.

While affiliated with the Evangelical Lutheran Church in America, Cal Lutheran is religiously diverse, including various Protestant and Catholic traditions, and with about 1 percent of its more than 4,000 students identifying as Jewish. The school’s campus ministry staff also includes a Muslim life coordinator.

“Big questions about where was God, and God’s presence, and God’s provision … where was God as a protector? These are tough questions,” Michael said, adding that they remind her of something the great Jewish theologian Rabbi Abraham Joshua Heschel said after the Holocaust.

“People asked him where God was during the Holocaust,” she said. “And he says, ‘Where was man?’ His whole theme is that God calls us to be partners with God. Where were we? We cannot solve everything, but there are things we are doing for each other, and there is more to do,” she said.

“I don’t have good answers. Nobody has. And if anybody tells you they have…” the rabbi said, her voice trailing off as a spontaneous gathering of members from the university’s choir began to sing the hymn “How Great Thou Art” a few yards away.

Meek was a longtime member of the choir, where he sang bass, and also performed in quartets and other university vocal ensembles.

“He had a beautiful voice,” said Hannah Karzin, 22, a longtime friend and classmate of Meek who sang in the choir with him for three years and graduated with him last spring. “He’s the kind of person you have to invent words to describe. He was belove-able.”

Meek was larger than life — a “big teddy bear” of a man who loved to sing and dance and cook, played water polo and volunteered his time helping veterans, Karzin said. He was the promoter for special events such as college night and Stagecoach Takeover Night at the Borderline, where Meek delighted in teaching novices how to line dance.

“Every Wednesday you’d wait for an Instagram from Justin saying, ‘Come on down to the Borderline, it’s college night!” she said.

“It was basically an extension of campus … everyone’s been there at least once,” she said, adding that for many regulars “it was a sacred place.”

Wednesday’s massacre was the 307th mass shooting of 2018. Among those killed were Telemachus Orfanos, a 27-year-old Navy veteran who had survived the mass shooting at the Route 91 Harvest Festival in Las Vegas last year. 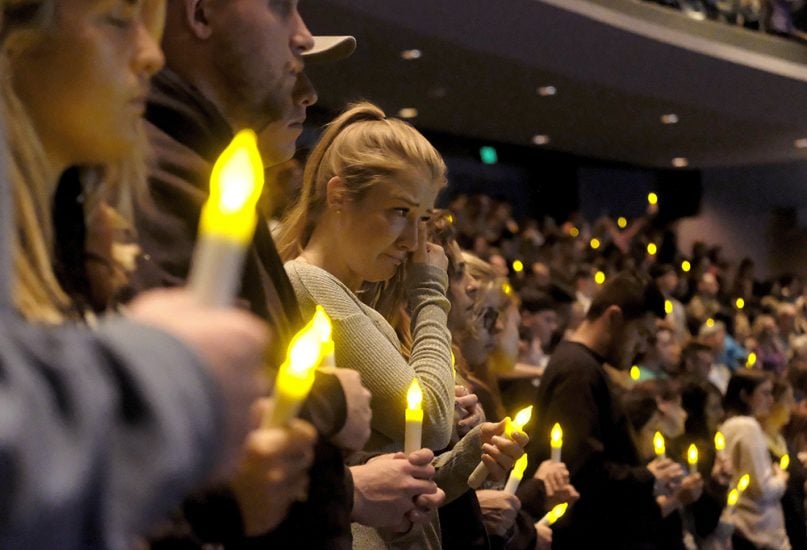 “I hope to God no one sends me any more prayers,” his mother, Susan Orfanos, told ABC7 News in Los Angeles on Thursday. “I want gun control. No more guns!”

At Thursday’s “service of lament” at Cal Lutheran, Meek’s family — including his mother, Laura, an Air Force veteran who also graduated from the university in May, his sister (a current Cal Lutheran student) and the family dog — sat in a front pew in the chapel where a steady stream of well-wishers stopped to embrace, pray for and weep with them.

“The people who did the most for us tonight were Justin’s family because it takes a lot of bravery and vulnerability and openness to grieve in community,” said the Rev. Hazel Salazar-Davidson, one of Cal Lutheran’s campus ministers.

“They cried, they sobbed. They laughed. They sang. They told stories and that was beautiful,” Salazar-Davidson said. “They were able to bring their whole selves and that was a gift.”

Salazar-Davidson, who joined the Cal Lutheran campus ministry staff in August after completing her graduate studies at Fuller Seminary in Pasadena, was ordained as an ELCA minister last week — just five days before the Borderline shootings. She and Maxwell-Doherty, who has served the Cal Lutheran community for 18 years, were in Wisconsin at a denominational meeting when news of the tragedy reached them in the early hours Thursday.

They caught the first flight home to Los Angeles, planning the service of lament along the way, even as their drive from the airport back to campus became something of an apocalyptic quest as raging wildfires closed roads throughout the Simi and San Fernando valleys.

On Friday morning, one of the wildfires had escalated to such an extent that the city of Malibu, where Pepperdine is located, was under an evacuation order. Pepperdine students and faculty were asked to shelter in place in field houses on campus, while firefighters from all over southern California fought the blaze.

The most important spiritual messages the chaplains wanted their reeling university community to hear was that they are not alone and that they have to grieve.

“Grief is a challenge because it can come in different ways and show up at different times that are unexpected,” said Salazar-Davidson, whose husband died in a car accident three years ago.

After the service adjourned, mourners lingered in the sanctuary where Meek’s mother briefly joined choir members for an impromptu hymn sing, while a dozen grieving students curled up on the floor of the narthex with several golden retrievers brought to the chapel by the Lutheran Church Comfort Dog Ministry.

Taped to the wall of the chapel, not far from an elaborate altar that still stood from the Day of the Dead earlier this month, was a handcrafted sign that read “Gratitude,” inviting students to leave their thoughts on this unthinkable day.

The first comment read: “I am grateful to be here.” 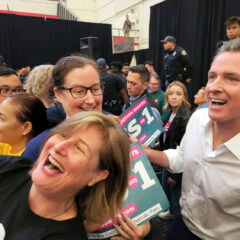 Opinion
How Yeshiva University tries to balance ‘yeshiva’ and ‘university’
Follow us on Facebook!
Submit your photos to RNS