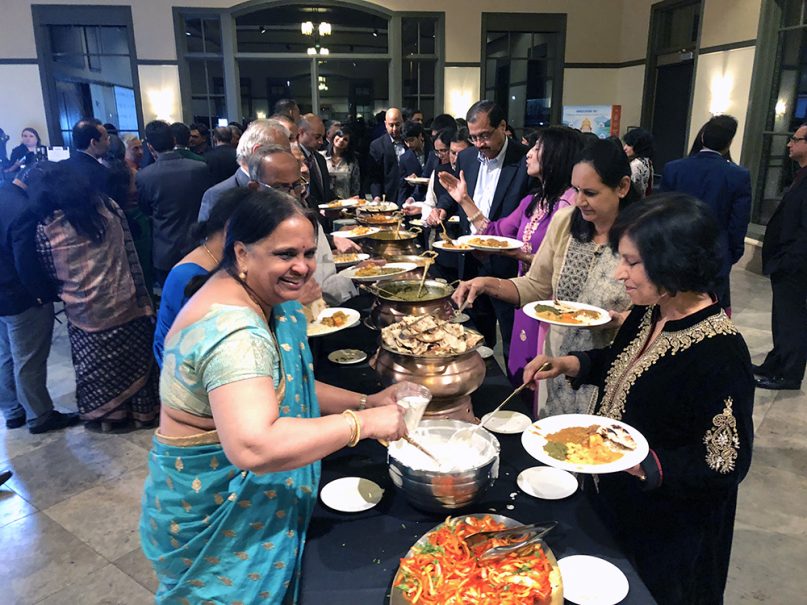 They took a quick look at the menu and got to work preparing four kinds of rice, alongside masala vada, a crispy lentil pancake; sambar vada, a kind of fried doughnut with a lentil base; and idly sambar, a savory rice cake made from a batter of rice and fermented black lentils.

All the food they prepared was strictly vegetarian and freshly made. 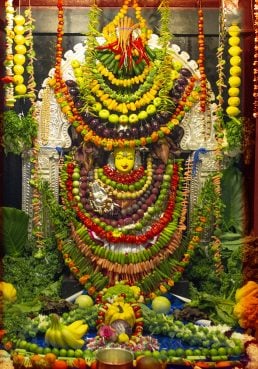 An idol of the Hindu mother goddess Devi Saraswati is wrapped in fruits and vegetables at Sri Siva Vishnu Temple in Maryland. Photo courtesy of Ashwani Ramamurty

“Food blessed by God stimulates the mind and body with holy thoughts and holy energy and promotes divine qualities,” said Sri Narayanachar Digalakote, a priest born and trained in India, who believes this diet, rooted in Hindu sacred text, is God-given.

On this early morning, he handed devotees cups of prasadam, a yogurtlike mixture ceremoniously offered on the altar to the multiple deities assembled there. In addition to laying offerings beside the deities, temple priests bathe and dress the statutes. On one festive day the mother goddess Devi Saraswati, for example, was extensively wrapped from head to toe with elaborate garlands of fresh carrots, multicolored peppers, broccoli and beets interwoven with strings of cherry tomatoes, ochre, lemons and limes.

The Hindu tradition of ahimsa, or nonviolence and compassion, includes a deep commitment to vegetarianism.

“Our forefathers started partaking in those foods for which they had no need to kill any sentient being,” said the temple’s general manager, Atul Rawat.

In India, where Hindus predominate, about a third of the population, or 400 million people, follow a vegetarian diet — more than in any other country. Mahatma Gandhi, the Indian independence leader, attempted to make vegetarianism, and a prohibition against eating beef, a central tenet of Hinduism.

He did not succeed. But now some Hindus — both in India and abroad — have found a new reason to recommit themselves to vegetarianism: global warming.

The idea is to bring the wisdom of traditional Hindu culture to address environmental degradation — specifically greenhouse gas emissions caused by animal waste.

Gopal Patel, founder of the Bhumi Project at the Oxford Centre for Hindu Studies in England, encourages environmental practice based on Hinduism’s core teachings of vegetarianism.

“When it comes to our food choices, what is the life that we can take that causes the least amount of suffering and pain?” he asked.

The question is urgent.

As wealth has increased, so has meat consumption. But dung and flatulence from cows, pigs, goats and sheep are major contributors to global warming. These animals produce methane gas, which is more than 30 times more potent at trapping heat in the atmosphere than carbon dioxide. In addition, raising livestock takes up 20 times as much land as growing beans, for example.

The United Nations Intergovernmental Panel on Climate Change in its most recent report recommends “less resource-intensive diets” to keep emissions in check. 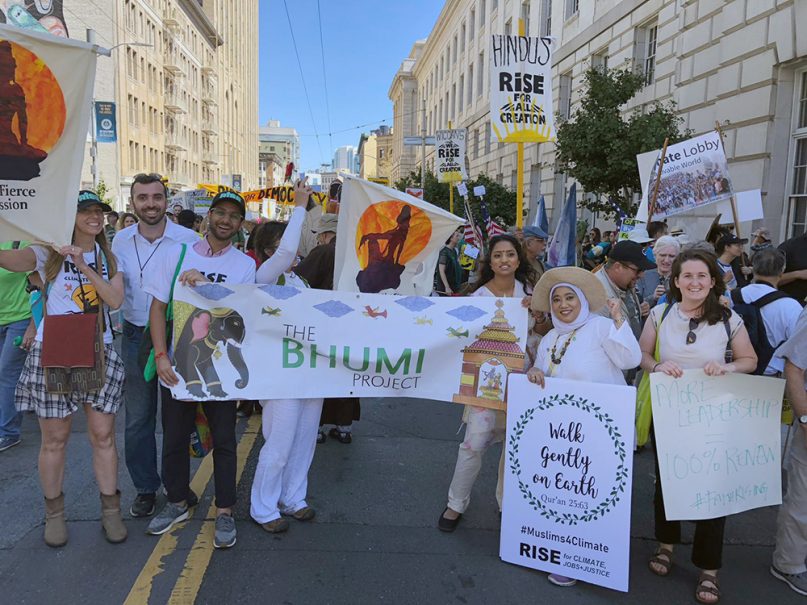 Hindus are among thousands of demonstrators advocating for a healthier planet at the Global Climate Action Summit in September 2018 in San Francisco. Photo courtesy of Bhumi Project

These findings have spurred a global climate action campaign called “Living the Change.” Launched by a coalition of faith partners this September at the Global Climate Action Summit in San Francisco, the initiative calls for people from diverse religious and spiritual backgrounds to pledge to live more sustainable lifestyles, including eating less meat.

Bold personal commitments to vegetarianism from high-level leaders across the faith spectrum, such as Bishop Efraim Tendero, secretary general of the World Evangelical Alliance, can, make a difference, said the Rev. Fletcher Harper, executive director of Green Faith, an interfaith coalition for the environment.

“The time is ripe for this kind of change,” Harper said. “It makes it far more likely that other people are going to make changes because they see institutions that they know and trust and with whom they feel a connection making those changes themselves.”

The pledges will be further quantified in terms of emissions reductions in transportation, energy use and diet to be announced at the December United Nations Climate Change Conference in Katowice, Poland.

The Bhumi Project and the Hindu American Foundation are among the groups leading the Hindu response to climate change.

At the San Francisco conference, HAF pledged to go a step further. Besides making a 100 percent commitment to vegetarian meals at all HAF events, the organization is vowing to make 30 percent of its dishes vegan.

“In doing that, we can even more deeply apply the precept of ahimsa in our lives, while simultaneously helping prevent climate change,” said Mat McDermott, HAF’s communications director and the co-author with Patel of the Hindu Declaration on Climate Change, a call to action presented at the Paris Climate Change Conference.

“Hindus offer a fresh perspective to address environmental degradation,” Patel said. “It is not a challenge for us to talk about the sacredness of nature. The challenge for us as Hindus is the inner work to renew balance and harmony in our lives and bring less harm to the planet and to ourselves.” 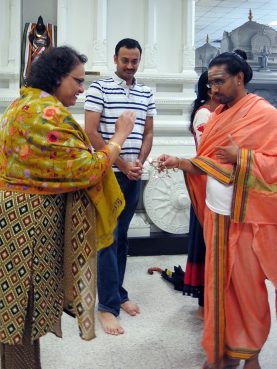 For Hindus, there’s work to be done. Vegetarianism, while viewed as commendable, is not obligatory. In the Indian states of Gujarat, Rajasthan and Punjab there are many vegetarians; in the south and east of India, far fewer.

But in hundreds of Hindu temples that have cropped up across the United States, Hindus are getting serious about advocating a vegetarian message.

Desserts like semolina cake, nuts and dried fruit and the spicy round sweets made with gram flour round out the vegetarian meal at the Sri Siva Vishnu canteen, which each weekend serves some 5,000 devotees like Try Mythili Bachu, a former Temple board member.

“Eating Indian food with all the different spices and flavors is very special,” she said, “because it is praised by God.”