(RNS) — When British pop star Zayn Malik tweets “Eid Mubarak” every year at the end of Ramadan, his Muslim fans around the world go wild. “Thank you for making me so happy!” some respond, while others reply with Eid greetings and prayers in Arabic and Urdu, or send Eid cards and fan art.

But now the former One Direction singer says he no longer identifies as Muslim. In an interview with British Vogue this week, Malik said he appreciates his religious upbringing but is no longer religious himself, beyond a “spiritual belief” in a God.

Many Muslims have expressed disappointment in his decision, and others have sharply criticized the “Pillowtalk” singer for what they perceived as him mocking Muslim beliefs and rituals.

But the Muslim fans who spoke to Religion News Service about his interview said they applaud Malik’s bravery in discussing his faith journey openly.

“I feel really happy he was honest about it,” said Fatimah Umar, who runs a Malik fan account on Twitter. “It is incredibly difficult for anyone to come forward with something of the sort (especially) in the Muslim community. The insane backlash he’s received isn’t something any Christian celebrities receive when they come forward as non-religious.”

And while she says she expected the reaction to be “very ugly” because of how defensive people can be about religion, Umar was still surprised at the magnitude of the “repulsive” backlash. “We put too much responsibility on him just because of him being Muslim.”

Malik received an Islamic upbringing where he grew up in Bradford, one of England’s most diverse cities. “I made sure the children went to the mosque,” his mother, a white British woman who converted to Islam upon marrying his Pakistani father, has said. “Zayn has read the Quran three times.”

Since entering the boy band scene with his 2010 audition on the music competition show “The X Factor,” Malik been an inspiration for his many young Muslim fans around the world.

“I always felt that I got some favoritism sometimes in certain places because the fans obviously want to relate to someone that’s similar to them,” Malik told British Vogue.

Part of his appeal to Muslims was that, as a pop singer who smoked, dated women and sported tattoos, he so visibly fit into the Western world — and changed media perceptions of Muslims.

But there was a dark downside to representing the hopes of Muslim fans. “He’s always faced a double standard since he was the token brown kid in One Direction,” said Zayna Khan, a college student in Maryland who said she has listened to his music since she was in the eighth grade. “I was really surprised by how many Muslims on my social media were so shocked and saying they were ‘disowning’ him because of this.”

In fact, Malik has rarely been vocal about his faith and heritage, aside from occasionally tweeting about fasting during Ramadan or greeting fans with “assalamo alaikum.” Last year he told the London Evening Standard that he did not want to be identified by his religion or culture.

“I take a great sense of pride — and responsibility — in knowing that I am the first of my kind, from my background,” he said. “I’m not currently practicing but I was raised in the Islamic faith, so it will always be with me, and I identify a lot with the culture. But I’m just me.”

Malik has previously explained that he believed religion should be about a personal relationship with the divine. “I don’t think you should stick it in people’s faces,” he said in an interview. “I think you should just keep it to yourself and that’s how I’ve always been with it.” 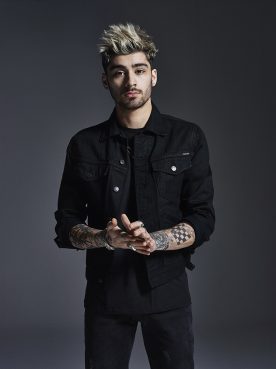 Despite that, Malik has faced racism and Islamophobia since he became Britain’s most famous Muslim pop culture icon.

In 2015, talk-show host Bill Maher jokingly compared Malik to Boston Marathon bomber Dzhokhar Tsarnaev. The Huffington Post once used a photo of the singer to illustrate a story about the Islamic State. When Malik tweeted “#FreePalestine” in 2014, he received death threats.

The previous year, an American rapper put out a parody song called “Zayn Did 9/11,” blaming him for the 2001 terrorist attacks. Right-wing blogger Debbie Schlussel accused him of “boy band jihad” and “pimping Islam” in 2012. And racist abuse helped lead him to temporarily leave Twitter.

Publicly distancing himself from Islam won’t stop any of that, one fan noted.

“Despite his individual beliefs, he’s still going to face discrimination like the rest of us, because he’s still identified as Muslim and he’s still Zayn Javadd Malik,” Umar said. “And it’s sad that while he’s a victim of backlash he’s now also going to get trashed by a community he belonged to for so long.”

And Zayna Khan, the Maryland student, pointed out that in the British Vogue interview, Malik seemed to suggest that it was precisely the constant speculation and judgment from Muslims that gave him the final push. “I just think that’s really sad,” she said.