(RNS) — Lost in the shorter, busier, cooler days of late November is a major Christian observance called the Solemnity of Our Lord Jesus Christ, King of the Universe.

In an era when religion can be a nominal identity marker worn lightly or a lifestyle choice based on aesthetic, convenience and intensity preferences that take on consumeristic character, Christ the King challenges all believers.

Is Christ king? If so, what does that require of the Christian? How should it shape individuals’ faith and devotion? What does it demand for the church and its relationship to the temporal order?

If Christ is not king, what’s the point of all this anyway?

Pope Pius XI, in his 1925 papal encyclical Quas Primas, says that the kingship of Christ is a bulwark against the “manifold evils in the world.” Pius, who instituted the feast day of Christ the King, reminded Christians reeling from the aftermath of World War I that the central theme of Jesus’ teaching was the kingdom of God.

For Jesus’ followers, this is what it’s all about.

In a fallen world corrupted by sin and lust for power, Christ proclaims a kingdom based on love and mercy. Grace and truth flow freely, beyond the goodness of what any earthly kingdom can provide.

Situated at the end of the liturgical year, Christ the King Sunday is a joyful exclamation point. It reminds Christians of the joys of our greater citizenship just as they prepare in the holy season of Advent to make way for the newborn King. 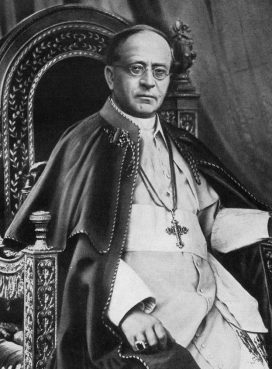 In his encyclical, Pius points to the familiar words of the prophet Isaiah: “For a child is born to us and a son is given to us, and the government is upon his shoulder, and his name shall be called Wonderful, Counselor, God the mighty, the Father of the world to come, the Prince of Peace. His empire shall be multiplied, and there shall be no end of peace. He shall sit upon the throne of David and upon his kingdom; to establish it and strengthen it with judgment and with justice, from henceforth and forever.”

The kingdom, as Isaiah imagines it, is a place of justice and blessings for all. Those promised blessings inspired Pius to institute a feast day honoring Christ as king.

“That these blessings may be abundant and lasting in Christian society, it is necessary that the kingship of our Savior should be as widely as possible recognized and understood, and to the end nothing would serve better than the institution of a special feast in honor of the Kingship of Christ,” wrote Pius.

Pius speaks to modern people who are pulled in competing directions about where their highest loyalties should lie. His encyclical points them to the rich teaching of the Old and New Testaments about divine kingship.

All manner of Christian prayers and devotions, especially hymns, also give beautiful and powerful expression to faith in Christ as king.

A well-loved hymn proclaims, “Crowns and thrones may perish, kingdoms rise and wane; But the church of Jesus constant will remain.”

If this is to be believed, Christians have to reaffirm their faith in one whose reign and kingdom would never end.

Christ the King offers a hopeful reminder to Christians whose loyalty to Jesus becomes subsumed by or subordinated to political ideology. This is especially urgent in an era of resurgent nationalism. Belief in Christ as King also guards against the ever-present and profoundly un-Christian tendency to elevate politics over faith.

Christ the King is not just about what has already happened or is happening now. It points to the kingdom Jesus proclaimed reaching its culmination at the end of time.

That focus on the kingdom reminds Christians that their hope is in God’s kingdom—not in short-term political gains.

“When once men recognize, both in private and in public life, that Christ is King, society will, at last, receive the great blessings of real liberty, well-ordered discipline, peace and harmony,” Pius wrote.

Lastly, the feast of Christ the King reminds our political leaders that they do not rule by their own power or might – and that their leadership role is not meant for their own gratification.

Instead, they should “make laws and administer them, having in view the common good and also the human dignity of their subject,” wrote Pius.

“The result will be a stable peace and tranquillity, for there will be no longer any cause of discontent.”