(RNS) — New York City authorities have broadened charges against the former owners of Newsweek magazine and the former publisher of the online publication The Christian Post to include a fledgling university connected to a controversial Korean evangelical Christian pastor.

In a Nov. 15 indictment that supersedes one issued in October, Manhattan District Attorney Cyrus R. Vance Jr. said his office’s investigation of Olivet University, based in Anza, Calif., and New York-based Christian Media Corp. revealed “an even larger scheme to defraud lenders throughout the country” than one suggested in an original indictment handed down in October.

Along with the university, the school’s trustee board chairman Andrew Lin, finance director and business school dean John Xiao and trustee William Anderson were also charged with “fraudulently obtaining at least $25 million in financing” under the school’s name, then laundering the money to fund the school’s operations, a news release said.

Anderson was until recently the head of Christian Media Corp., which owns The Christian Post, a popular website that claims a “pandenominational” focus. The website’s editors denied any link to the fraud case when the first indictments surfaced.

Olivet was founded in 2000 by David Jang, a Korean pastor, who also has links to IBT Media’s executives as well as the World Evangelical Alliance. Critics claim Jang, 69, has described himself to core members of his church as the “Second Coming Christ,” a new messiah sent to complete the “failed” mission of Jesus.

The indictment also alleges Anderson and Xiao “overstated the financial health” of the school “and provided false financial statements to the lenders.”

A statement emailed by Olivet University's public relations representative, Ronn Torossian, defended Olivet, denying the charges and saying the university "will vigorously defend itself against these unsupported allegations — including the puzzling claim that lenders who have suffered no loss were somehow victimized."

Asserting that the school “is no stranger to adversity and looks forward to being fully vindicated in court,” the statement also said Olivet "stands strongly by the individual members of its team who have been wrongfully accused.”

Torossian replied with a terse “No” when Religion News Service requested an interview with any Olivet University official. A call to school spokesman Mark Li, who also teaches business communications there, was not returned. 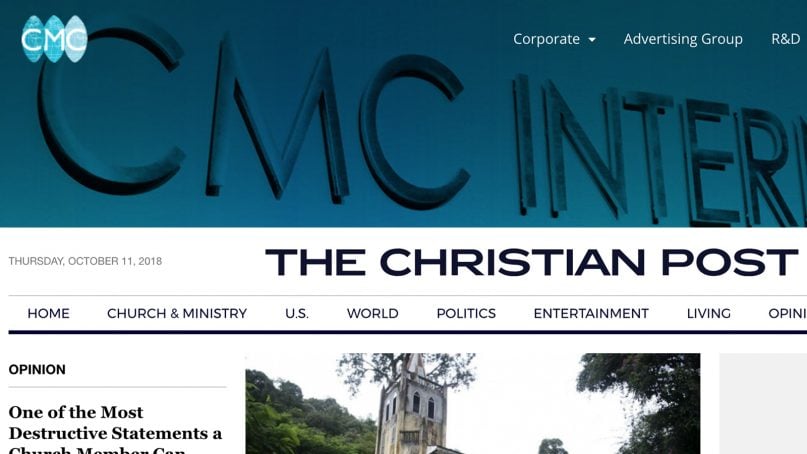 Homepages of Christian Media Corp., top, and one of its entities, The Christian Post. Screenshot

According to the government's allegations, Oikos Computer Networks, a company linked to previously indicted Christian Media Corp. and IBT Media, raised approximately $25 million to purchase high-capacity computer servers. That money was allegedly redirected “to accounts controlled by Anderson, Xiao, [and] Olivet,” the charges maintain, as well as unindicted co-conspirators.

Olivet University — which is not related to either Olivet Nazarene University in Illinois or Michigan’s Olivet College — has long been associated with IBT Media, the company indicted earlier by Vance’s office. Olivet students worked for IBT and its properties, often as interns, media reports have said.

Until this summer, IBT Media owned Newsweek magazine, the once-prominent weekly that the Washington Post Co. sold in 2010 to audio entrepreneur Sidney Harman in partnership with mogul Barry Diller. After Harman’s death, his family’s trust relinquished its interest in Newsweek to Barry Diller’s IAC, which then sold the magazine to IBT Media.

In both the October indictment and the one handed down in Manhattan last week, it’s alleged that Olivet and IBT (operating under the name “Newsweek Media Group”) shuttled some of the $25 million they borrowed to Newsweek and Olivet to cover those units’ operating expenses.

Both Torossian’s statement and earlier assertions from IAC noted that any loans involving the firms were repaid and that the lenders “have suffered no loss.”

No trial date has been set on the charges.