DENVER (RNS) — Najeeba Syeed was all set to speak about Islam and peacemaking, something the associate professor of interreligious education at Claremont School of Theology had done many times before.

Then came the death threat.

The threat was specific, and the sender was identifiable. The university where she was to appear said it could not guarantee her safety.

Syeed thought about her two kids, who were supposed to be with her that day — and decided the risk wasn’t worth it.

“For the first time in my life, I did not take the stage,” said Syeed. “I was silenced as a scholar.”

Professors of religion like Syeed often are asked to comment on current trends and social events as part of their scholarship. But doing so can come with a downside.

Syeed shared her death threat experience as part of a panel titled “The Public Religion Scholar in a Social Media Age: Risks, Rewards, Reverberations” on Nov. 19 at the American Academy of Religion’s annual meeting at the Colorado Convention Center in Denver.

Other panelists shared stories of death threats, rape threats and threats to their jobs that came after publicly sharing their work as scholars on social media, on television and radio shows or at speaking engagements. And many in the audience, panelist Simran Jeet Singh said, likely had similar stories.

That’s especially true for scholars of color, said Singh, a visiting scholar at New York University’s Center for Religion and Media and a columnist for Religion News Service.

Public scholarship was the theme of this year’s AAR meeting, attended by nearly 9,500 religion scholars in conjunction with the Society of Biblical Literature’s annual meeting. That focus will continue at next year’s meeting as well. 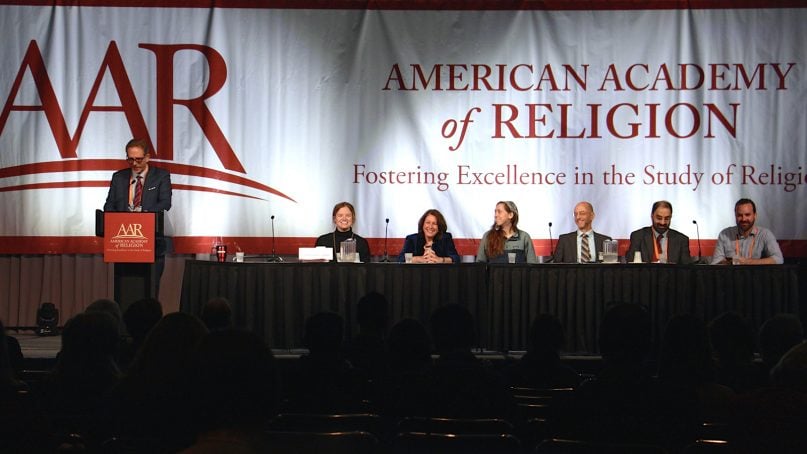 AAR President David Gushee, left, moderates a plenary panel titled “Religion Journalism and Religion Scholars: To 2020 and Beyond” on Nov. 17, 2018, at the start of the American Academy of Religion annual meeting in Denver. Panelists include (left to right) Elizabeth Dias and Laurie Goodstein, both of the New York Times; Emma Green of The Atlantic; Jerome Socolovsky of National Public Radio; Niraj Warikoo of the Detroit Free Press; and Jeremy Weber of Christianity Today. RNS photo by Emily McFarlan Miller

David Gushee, the president of AAR, said it’s important for scholars to share their knowledge at a time when religion is a topic of fierce public debate.

Still, there are risks. He believes the “deteriorating nature of the conversation in the online space” leaves publicly visible religion scholars vulnerable to attack.

“It is becoming at least dangerous in terms of mental health and a peace of mind — and sometimes actually physically dangerous — to do the work that we do,” he said. “We have more and more scholars who are being threatened, doxxed … all of that.”

Some scholars have chosen to use new forms of public engagement to reach a wider audience with their work, such as the popular YouTube channel “Religion for Breakfast.”

Andrew Mark Henry started the channel several years ago while working on his Ph.D. in religious studies at Boston University. He was a fan of educational videos on YouTube and noticed few dealt with religion scholarship.

There were channels devoted to other academic fields, such as science and the humanities. Channels devoted to religion, he said, were either  “confessional” or “angry atheist” channels. But there was almost nothing in between.

It’s important to fill that gap, he said, because YouTube popularly is used as a search engine, much like Google. People already are going there with their questions about religion and finding few answers.

“People are already out there talking, and our voices are not there,” he said.

Anthea Butler, who led a workshop on religion and media at the AAR meeting, said a viral post she wrote for the website Religion Dispatches about Hurricane Katrina first thrust her into the public eye in 2005. Butler has written a number of op-eds since, appeared on TV and radio and maintains an active Twitter presence.

The associate professor of religious studies and Africana studies at the University of Pennsylvania said she is glad the academy is talking about public scholarship.

But it needs to do more to provide resources and equip scholars to do that work, she said.

“We have too many problems in the world that stem from religion or people misunderstanding religion we could contribute to,” she said.

Like Syeed, Butler said she has gotten death threats. She’s been called by racial slurs, too. 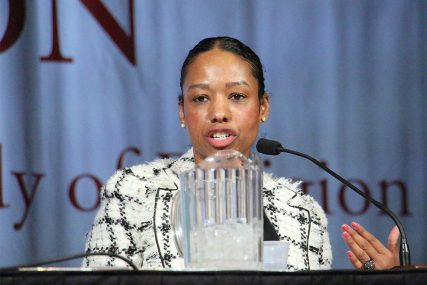 Larycia Hawkins, who teaches seminars in the religious studies and politics departments at the University of Virginia, speaks on a plenary panel titled “The Public Religion Scholar in a Social Media Age: Risks, Rewards, Reverberations” on Nov. 19, 2018, at the AAR annual meeting in Denver. RNS photo by Emily McFarlan Miller

Her 2015 Facebook post echoing Pope Francis’ words that Muslims and Christians worship the same God alongside a photo of herself wearing a hijab grabbed headlines, exposing a growing rift within evangelical Christianity in the United States. The college placed her on leave and started termination proceedings against her. Eventually, they reached an agreement to part ways.

Hawkins, who now teaches seminars in the religious studies and politics departments at the University of Virginia, always had hoped her work as a scholar would be relevant outside academia.

“The revolution will not, in fact, be peer-reviewed,” she said.

It certainly wasn’t Syeed’s plan, she said. It became inevitable, though, because of who she was — a Muslim woman. The very thing she was trying to promote — interreligious understanding — was used against her.

But she continues to do the work, she said, calling herself a “radical believer in hope.” Knowledge, she believes, is the best antidote to fear, and engagement can transform lives.

“I believe in a different future, and if I don’t stand at the place where I’m going to change it, it will never change,” Syeed said.

News
Taliban: Women can study in gender-segregated universities
Follow us on Facebook!
Submit your photos to RNS