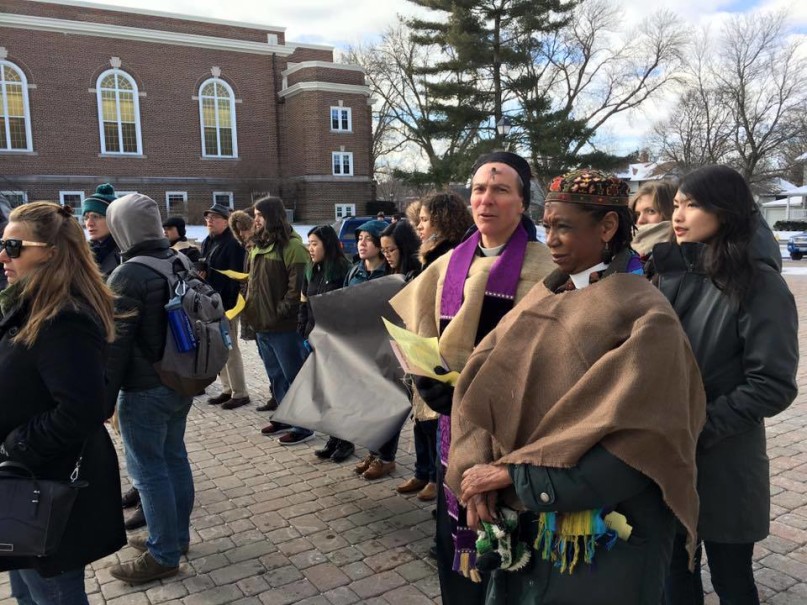 WHEATON, Ill. (RNS) Esther Kao was so disappointed by the way Wheaton College dealt with the controversy over Professor Larycia Hawkins, that she started filling out the Common Application to transfer to another school.

But then she remembered why she came here in the first place.

“It was attractive to me that this school is committed to the difficult balance between a liberal arts education and faith — a balance which wavered during the ‘controversial’ theological statement Dr. Hawkins made on Facebook,” the Wheaton sophomore said.

Kao, who is majoring in English and philosophy, has been active in demonstrations supporting Hawkins.

On Wednesday (Feb. 10), Hawkins, a political science professor and Wheaton President Philip Ryken appeared together to announce they’d reached a confidential agreement and would be parting ways.

But students and faculty — as well as scholars from outside the school — have mixed feelings about the future of the evangelical Christian college in suburban Wheaton.

Wheaton has been called the “evangelical Harvard,” and it has a good reputation because of the high quality of its graduates, according to Martin Marty, professor emeritus of the history of modern Christianity at the University of Chicago Divinity School. Noted alumni include evangelical luminaries such as Billy Graham and his wife, Ruth Bell Graham; Jim and Elisabeth Elliot; John Piper; A.W. Tozer and Rob Bell. It’s the kind of school that tries to keep the liberal arts alive, that houses collections of papers by J.R.R. Tolkien, C.S. Lewis and Dorothy Sayers, Marty said.

That means it occupies a perilous position in the world of religious-based institutions of higher learning — more invested in keeping religion at the fore than many Catholic or Lutheran or Methodist universities, but not so fundamentalist as a Liberty or Bob Jones universities.

“Every move they make is a little bit precarious,” said Marty.

RELATED STORY: Is Wheaton College getting a fair shake? (COMMENTARY)

Hawkins, who joined the college in 2007 and was tenured in 2014, was placed on leave and termination proceedings against her started in December after she posted a photo of herself wearing hijab on her personal Facebook page. It wasn’t the hijab that gave Wheaton pause, the college has said, but the caption she posted with the photo: “I stand in religious solidarity with Muslims because they, like me, a Christian, are people of the book. And as Pope Francis stated last week, we worship the same God.”

She later made additional posts on Facebook and Twitter reaffirming Muslims and Christians worship the same God, which the college has said seemed “inconsistent with Wheaton College’s doctrinal convictions.”

Kirkland An — editor-in-chief of the school’s student newspaper, the Wheaton Record – said the college is split in different ways over Wheaton’s actions regarding Hawkins: there are those who unconditionally support Hawkins and those who support her but don’t agree with her theology. There are those who unconditionally support the administration and those who support the administration but don’t agree with the procedure it followed in this case.

Students “tend to polarize toward either extreme,” he said, especially because many don’t understand the complicated issues of tenure involved.

RELATED STORY: Conservative and progressive US evangelicals head for divorce

Like Kao, Kelsey McMahon — a graduate student in Wheaton’s marriage and family therapy program – said she chose the school because she wanted a space where she could question her beliefs within the boundaries of Christianity. She said the Hawkins affair hasn’t changed that.

“I don’t think it has made me feel like I can’t question,” she said, studying at a coffee shop near campus earlier this week. “If anything, this is bringing up more things to talk about. I don’t think there’s a sense we’re cinching or closing in.”

“It’s created good conversations around the world about, ‘Who is God?’ ‘Who is Allah?’ ‘What do we actually believe?’”

Early in the school’s history, Wheaton had a reputation as a progressive institution, according to Grant Wacker, professor emeritus of Christian history at Duke Divinity School. It was a stop on the Underground Railroad and admitted women in the 19th century, he said. And its first president, Jonathan Blanchard, was an abolitionist and “crusader for social reform,” according to the school website.

Evangelism changed, Wacker said, and in the 20th century, both the faith and the school became more conservative. There’s an increasing sense from both that they are “under siege,” according to Michael Hamilton, a professor of history at Seattle Pacific University.

But even as the school has taken more conservative positions, it has remained connected to current trends in the liberal arts, frequently positioning itself in opposition. It hasn’t shied from making public statements on controversial issues, such as evolution, biblical inerrancy, even Obamacare.

The conflict between Hawkins and the administration is itself emblematic of where American evangelicalism is today, said Wacker.

“It’s not that either one of them represents evangelical tradition. It’s the fact there is so much turmoil and conflict and mixed positions. That’s exactly where evangelicals are,” Wacker said.

Some students and faculty say the episode was also about racism and sexism. The college’s own diversity committee called the school’s proceedings “discriminatory on the basis of race and gender, and, to a lesser extent, marital status,” according to a report in TIME. Hawkins is the first black, female tenured professor at Wheaton.

Hamilton said while white northern evangelicalism — the tradition with which he identifies Wheaton — has made efforts to diversify, it still is hampered by a number of unconscious assumptions; namely, that a Christian will act in a certain way, regardless of race or culture or background. It also got its start in conflict with academia, he said, and, in some ways, Wheaton still sees its faculty as the main threat to the religious character of its institution, carefully selecting an monitoring professors based on their theology.

“You get the perfect storm in Larycia Hawkins,” he said.

On Wednesday, Ryken said he knew not everyone on every side of the conflict would be satisfied with its resolution. But he tried to be optimistic.

“We want to learn everything we can from this situation. We hope to become a better, stronger community with a shared understanding of academic freedom in the context of our Christian convictions,” Ryken said.

Kao, the student, said she also hopes the school emerges stronger, and that the student activism will continue.

“There are so many areas for improvement,” she said, “so many different issues, now exposed, that we can tackle.”

(Emily McFarlan Miller is a contributor to RNS)