DHARAMSHALA, India (RNS) — Tibetan Buddhist monks from around the world are gearing up to discuss whether the aging Dalai Lama should reincarnate — and, if he does, then how to prevent Beijing from claiming that Tibet’s next spiritual leader will reincarnate in China.

The monks had been scheduled to congregate in the Himalayas of northern India this week to deliberate on the issue at the 13th Religious Conference on Tibetan Buddhism beginning Thursday (Nov. 29), but the three-day meeting was called off after a high-ranking Tibetan monk, Kathok Getse Rinpoche, died on Nov. 19. Getse Rinpoche was the leader of the Nyingma school of Tibetan Buddhism.

New dates are yet to be announced for the conference in Dharamshala, where the 83-year-old Dalai Lama and his followers have lived in exile since 1959, but the monks are prepared to deliberate on the steps, interpreted from ancient Buddhist texts, to recognize the reincarnated body if their spiritual leader decides to continue the office after his death. Tibetan Buddhists believe that karma directs a person’s reincarnation, but those who have achieved enlightenment can direct their own path, choosing the body of their rebirth.

The 14th Dalai Lama has been the face of Tibet’s nonviolent struggle against China, which in the 1950s seized the region and killed tens of thousands of Tibetans who resisted the communist rule. Since 1959, the Indian government has provided land to the Dalai Lama and Tibetan refugees.

In a major departure from 369 years of tradition, the 14th Dalai Lama relinquished all political power in 2011 to the Central Tibetan Administration, a democratic institution with a parliament and president. The move came four years after China’s atheist government decreed that all reincarnations of living Buddhas have to be approved by Beijing given that Tibet is officially part of China. They designate the Dalai Lama and his followers as “terrorists” or separatists.

China created the Tibet Autonomous Region as part of an agreement between Tibetan representatives and Beijing, but Tibetans say they still have little autonomy. More than 150 Tibetans, mostly monks and nuns, have self-immolated since 2011 in response to alleged religious restrictions and interference inside Tibet.

In 2011, the Dalai Lama also said preparations to determine how his successor would be found wouldn’t happen until he reached 90, in 2025, when he would first consult with Tibetan Buddhist authorities about whether to even continue the Dalai Lama institution. But then last year, the Dalai Lama said the process would begin as soon as 2018. He has in recent years mentioned that perhaps he would not reincarnate. 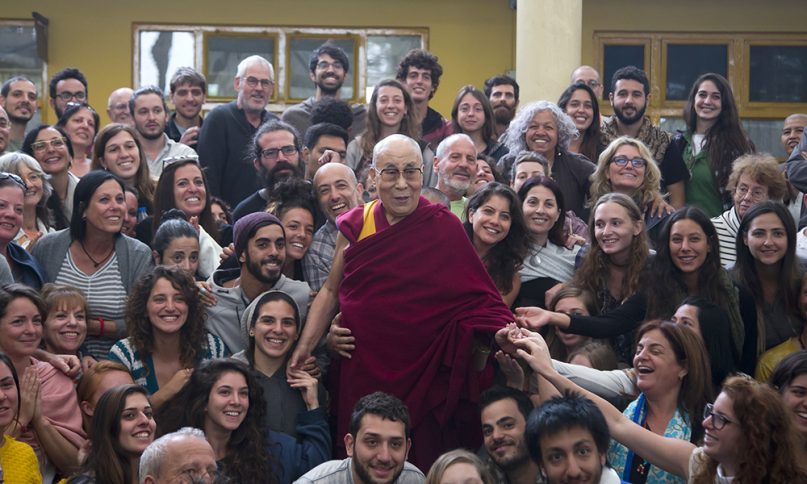 Tibetan spiritual leader the Dalai Lama, center, poses for a group photo with tourists at the Tsuglagkhang Temple in Dharamshala, India, on April 16, 2018. The Tibetan leader spoke to a group of Indian and foreign tourists on secular ethics and the importance of tolerance in the 21st century. (AP Photo/Ashwini Bhatia)

“There is no guarantee that some stupid Dalai Lama won’t come next, who will disgrace himself or herself,” the Dalai Lama told BBC in 2014. “That would be very sad. So, much better that a centuries-old tradition should cease at the time of a quite popular Dalai Lama.”

Speaking to media in Japan earlier this month, the Dalai Lama said that succession through nomination, instead of reincarnation, could be a way to continue his office. “I think sooner or later, we should start that kind of practice,” he was quoted as saying.

China will likely try to name its own Dalai Lama regardless, as Beijing asserts that the seat of Tibetan Buddhism should be inside Tibet. In the 1990s, the Dalai Lama recognized a 6-year-old boy as the Panchen Lama, the second-most-revered position in Tibetan Buddhism. Shortly thereafter, the boy and his family disappeared in Chinese custody and their whereabouts remain unknown. Then China declared a new Panchen Lama.

The continuation of the centuries-old tradition of reincarnation is crucial because the Dalai Lama is the only unifying figure for the Tibetans and their struggle for autonomy within the Chinese rule. Tibetans would prefer to end the office of the Dalai Lama rather than have a China-appointed spiritual leader.

“It’s difficult for us to imagine Tibet without him,” said Namdol Lhagyari, the youngest member of Tibet’s exile parliament. “But, you know, we also have to be realistic. We have to make sure all our energy goes toward the Central Tibetan Administration because this is the only institution that we have which is able to challenge the Chinese government.”

Many Tibetans insist the Dalai Lama will always remain.

“We have this belief that he will come back, you know,” said Lobsang Sangay, president of the CTA. “So we will never be without him, you see?”

From a mountainside temple in Dharamshala, through international forums (and even Twitter with nearly 19 million followers), the Dalai Lama teaches popular Buddhist values such as compassion, religious tolerance, finding joy and service to others.

Those values are the basis for the CTA, an administration without police or prisons to enforce its laws and with low salaries and few material benefits to discourage corruption. Sangay, an American citizen, was working in the U.S. as a lawyer before his election to the presidency, where he now receives just $350 a month, he said.

The CTA has been busy lately amending laws, apparently to prepare for an interim period, if not a post-Dalai Lama era, until he is identified. The exile government’s democracy stands apart from most: It’s a partyless democracy, designed to prevent fracturing the community. On Oct. 3, Sangay signed an amendment banning nominations for parliament members from nongovernment organizations or political groups and shortening elections to 100 days. 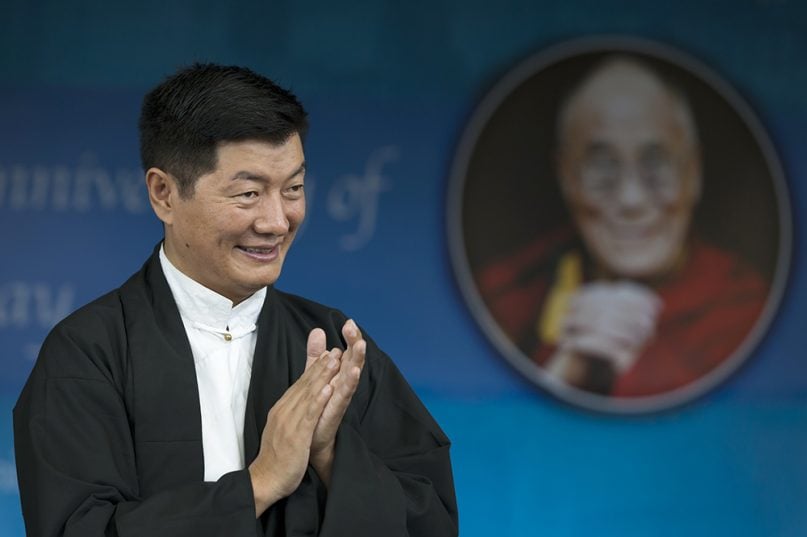 Lobsang Sangay, president of the Central Tibetan Administration, stands next to a portrait of the Tibetan spiritual leader the Dalai Lama during an event to mark the 58th anniversary of the formation of the first Tibetan parliament-in-exile in Dharamshala, India, on Sept. 2, 2018. (AP Photo/Ashwini Bhatia)

“Not that we can fully address everything, but we are making sure that there are the least damages and more unity,” Sangay said.
The CTA and the Dalai Lama’s official policy for Tibet since 2008 is the Middle Way Approach, seeking religious freedom and political autonomy within China rather than separate nationhood, although a minority of Tibetans in exile still openly advocate for independence.

So far, the movement for a free Tibet has remained nonviolent, although 152 Tibetans inside the region (and some outside) have self-immolated to draw attention to alleged ongoing brutal repression by Chinese authorities.

“When you burn yourself, this is a really violent death,” Sangay said. “You are capable of violence, you know. But you are not harming even a single Chinese person or property. You are in a town or village where there is the Chinese military officer who beat you up, who destroyed your forest, and he or she is right there in front of you, but you’re saying, ‘I’m protesting against your policy but not against you as a person.’”

This aspect of nonviolence has perhaps counterintuitively fueled the Tibetan freedom movement. The Dalai Lama teaches that everybody — even an evil person — has a Buddha nature, so no one should harm another person. Those seeking justice should harm the act and not the actor, he has said.

“No one else in the Tibetan community would be able to replace His Holiness,” Lhagyari said. “But we have to understand, in every freedom movement, you know, India never had another Gandhi, South Africa never had another Nelson Mandela, but the movement had new leaders. It’s important that we look out for another strong personality that could come out from the democratic movement.”

Tenzin Tibet Lekshay, deputy director at the think tank Tibet Policy Institute, also suggested that Tibetans should prepare for a possible post-Dalai Lama era, or the interim period, with wisdom and a sense of responsibility. Tibetans should keep in mind the history of the transitory periods that occurred over the past few hundred years, he said.

“In the absence of His Holiness the Dalai Lama, one of the viable alternatives to maintain stability within the Tibetan community is to develop a collective leadership,” he said.