“I don’t believe it,” President Trump said the other day in response to a question about the federal government’s latest report on climate change. ” It’s “not based on facts,” asserted Sarah Huckabee Sanders.

Climate change denial is a species of faith—the non-evidence of things seen, as the author of Hebrews might have said. The GOP has made it a doctrine, and the party faithful have increasingly embraced it. In the first year of the Trump presidency, the proportion of Republicans who believe that global warming is caused by human activity, and that it has already begun, dropped from 40 percent to one-third.

At the same time, the Democrats’ contrary faith in the evidence of things seen has gotten stronger. In the first year of the Trump presidency, the percentage of them who believe that global warming is caused by human activity grew from 87 percent to 89 percent; of those who believe it has already begun, from 73 to 82 percent.

And what of our religious communities? It is a fact of our polarized society that their views “largely reflect [their] partisan or ideological composition,” as an ABC News poll put it last summer. But fortunately, not entirely.

By comparison, the proportion of Nones who see global warming as a very serious problem has gone from 42 percent in 2013 to 46 percent in 2015 to 66 percent this year.

So is the glass half full or half empty? I’m going with half full.

No doubt, Trump will keep doubling down on his refusal to do anything about a situation in which he disbelieves except to exacerbate it. And as the movement for a Green New Deal grows within the Democratic Party, Fox News will go all out to demonize it.

But facts are stubborn things, and the facts of of warming temperatures and extreme weather events and flooding coasts will be impossible for all but the staunchest climate change deniers to ignore. Let us hope that white evangelicals, already less faithful in their climate change disbelief than Republicans in general, will be the thin edge of the wedge.

For as Hebrews 11 begins, “Faith is the substance of things hoped for.” 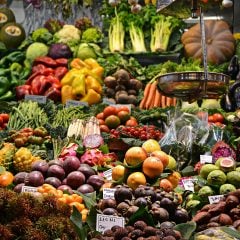