CRISPR is a tool that allows scientists to edit pieces of DNA. Gene editing in embryos is highly controversial and illegal in most areas. Image by Ernesto del Aguila III/NHGRI/NIH/Creative Commons
November 30, 2018
Charles C. Camosy

(RNS) — The 50th anniversary of 1968 has brought with it many considerations in the press and elsewhere about how consequential a year it was in the United States.

One of the most significant events, however, hasn't gotten much notice. In 1968 a group of doctors and other health experts was assembled and given the cumbersome name of the Ad Hoc Committee of the Harvard Medical School to Examine the Definition of Brain Death. They were responding to advances in both medical resuscitation and transplant surgery, which created a need for donor organs. In August 1968, the committee released a report that would lead to the rethinking of our very ideas of life and death.

The Harvard brain death committee defined death as the state of "irreversible coma" and provided three criteria, now familiar to many of us, to guide physicians in identifying it. Three strikes and you were out.

This view eventually came to dominate the view of the medical community at large and eventually of every state in the union, with the exceptions of New Jersey and some hospitals in New York City, which respect a religious exception invoked almost exclusively by Orthodox Jews.

This well-meaning shift, designed to save people who need life-saving transplants, ended up having consequences that few anticipated at the time and are not well understood even today.

Someone who does understand is Princeton philosopher Peter Singer. In a seminal 1996 book titled "Rethinking Life and Death," he demonstrated that considering brain death as death has put us on a completely new path.

Someone who is brain-dead is a living, breathing member of our species. She can fight off infections, react to her environment (including bodily trauma) and even gestate and give birth to a perfectly healthy baby.

It is absurd to the consider the human body dead when it can do all these things; it means a person must be something other than a living fellow member of our species.

This “collapse of our traditional ethics,” according to Singer, opened the door for us to consider other Homo sapiens who are not rational or self-aware as non-persons: early- and late-term fetuses, humans in a persistent vegetative state and those with severe dementia.

Singer lamented his own weakness in spending resources on his mother who, due to late-stage Alzheimer’s disease, lost her self-awareness. Objectively, in his view, it would have been better to spend such resources on a living human being who was — unlike his mother — a person.

Members of the Harvard Brain Death Committee certainly didn’t intend to undermine the social equality of, among others, the 6 million Americans who currently have Alzheimer’s disease. They only wanted to save lives. By irresponsibly plowing ahead on a matter of fundamental ethical concern, however, they lost the chance to anticipate the bad results of their good intentions. 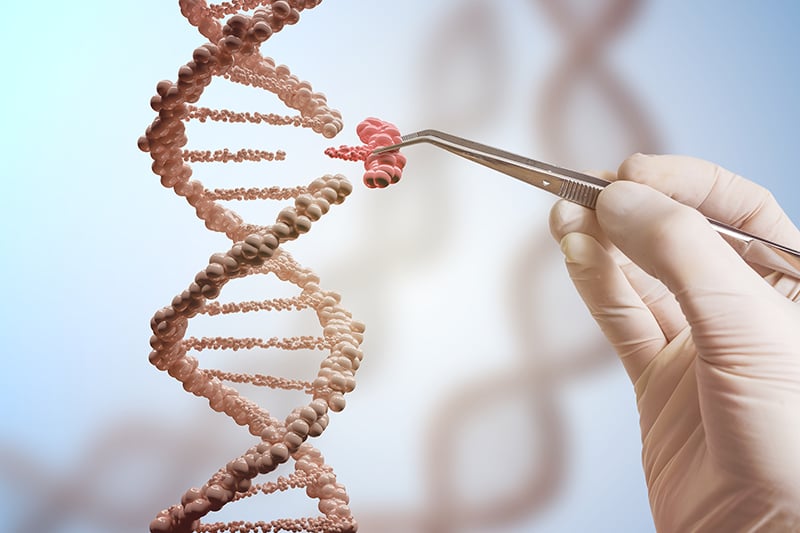 A hand replaces part of a DNA molecule in a conceptual rendering of genetic engineering and gene manipulation. Image via Shutterstock

Despite a strong international norm against the practice, Chinese scientist He Jiankui recently claimed, via YouTube, that he is the first to use CRISPR, a technique for altering DNA within cells, to edit the genes of human embryos and successfully bring them to birth.

Responses to this news have been almost universally negative. The National Institutes of Health reiterated its opposition to gene editing and found He’s reasoning “utterly unconvincing.” Renowed bioethicist Art Caplan, who is not opposed to gene editing, referred to He as a “moral idiot.” Even aggressive defenders of gene editing like Oxford’s Julian Savulescu said, “It is too early.”

One major voice, however, did not react negatively — that of Harvard Medical School. Reporting from the Genome Editing Summit in Hong Kong on Wednesday (Nov. 28), Antonio Regalado of MIT Technology Review tweeted that George Daley, dean of the medical school, said in a speech that Harvard is “ready” for “responsible” clinical use of embryo gene editing. According to Regalado, Daley wanted us to “stop debating ethics” and “start talking about the pathway forward.”

Daley's primary complaint with He's experiment appears to be that, by moving ahead precipitously, he could give gene editing a bad name.

Once again, Harvard is suggesting we capitalize on newly available medical techniques in the name of doing good (saving children from genetic diseases) without thinking through the implications.

We may not be able to anticipate how gene editing may fundamentally change our reality, but at the very least we should dwell — long and hard — on the following questions before going forward:

Can we determine whether the risk to the child is substantial enough to try editing? He Jiankui thought the children’s father having HIV was enough, but Savulescu strongly disagreed and the NIH found it utterly unconvincing.

Can we be sure that the gene editing will focus on mitigating genetic disease and not on enhancement? Savulescu is a strong proponent of trying to make human beings smarter, happier, etc., via gene editing. In a culture dominated by procreative liberty, how can we tell parents they cannot “give their child a better future” via this intervention?

If gene editing is available only to those who can afford it, won’t this exacerbate the gap between rich and poor? What are the social justice implications of taking this step?

How will this practice affect our view of disabled populations and their parents? Will parents who choose not to edit their embryos be looked at as cruel and inhumane? Will the disabled — who might have been “cured” via gene editing — be pushed to the margins of the culture?

Will medical systems — especially those that have to make hard decisions about allocation of resources — pay to take care of these populations? Will the decisions of such medical systems coerce parents to edit their children’s genes?

Will this decision push in vitro fertilization to become the normative way human beings reproduce? Will parents who procreate the old-fashioned way be considered irresponsible? What are the implications of going from procreation as the result of a relationship between two people to a technocratic process, with quality control, in a laboratory?

Until we have clear answers to these questions, we should refuse to edit human embryos. Let medicine learn from its past. What may look like a simple move in the search of a good outcome — when the moral stakes are so high — will almost certainly have profound unintended consequences.

And this demands patience and cooler heads than those currently leading Harvard Medical School.

(Charles C. Camosy is associate professor of theological and social ethics at Fordham University and author of “Beyond the Abortion Wars.” The views expressed in this commentary do not necessarily reflect those of Religion News Service.)