(RNS) — On a chilly, rainy Sunday in April 1991, my wife Marcia and I were among a small number of religious leaders who spent nearly six hours with President George H.W. Bush at Camp David. We were there for the dedication service of the newly constructed interreligious chapel at the presidential retreat in Maryland, which had also served as a relaxed but conducive place for top-level diplomatic negotiations.

For more than two years, Protestant, Roman Catholic and Greek Orthodox clergy and laypeople and myself, the sole Jewish member of the group, had worked together to raise private funds for a building to be used for worship, study, and meditation by presidents, their families, camp support staff and, of course, visiting world leaders.

FDR was the first chief executive to use the former Boy Scout campsite north of Washington as an escape from the brutal Washington summer heat. Though the exact location was kept from the public — President Roosevelt called the retreat “Shangri-La,” adding to its mystery — it is only seventy-four miles from the capital in the Catoctin mountains of Maryland.

But, strikingly, there was no permanent chapel at “Shangri-La.” A more prosaic president, Dwight Eisenhower, named the camp in honor of his grandson, and for decades religious services had been held in the camp’s kitchen or its bowling alley.

George and Barbara Bush were our hosts that Sunday. The Gulf War had successfully ended two months earlier, and Bush was at the top of his popularity with the American people; few of us at Camp David that day had heard of a young Arkansas governor named Bill Clinton.

The first thing I noticed about Bush was his extraordinary politeness. He constantly said, “Excuse me” as he moved from one cluster of visitors to another. I heard one visitor ask Bush if he was able to play golf on the grounds at Camp David.

“Oh no,” he quickly replied. “Ike (Eisenhower) put in a putting green, but there is a golf course just outside Camp David, and they are nice people and let me play there whenever I like.”

I was amused by the notion that the local golf club officials would stand in the way of the “Leader of the Free World” playing a few holes on their nearby course. 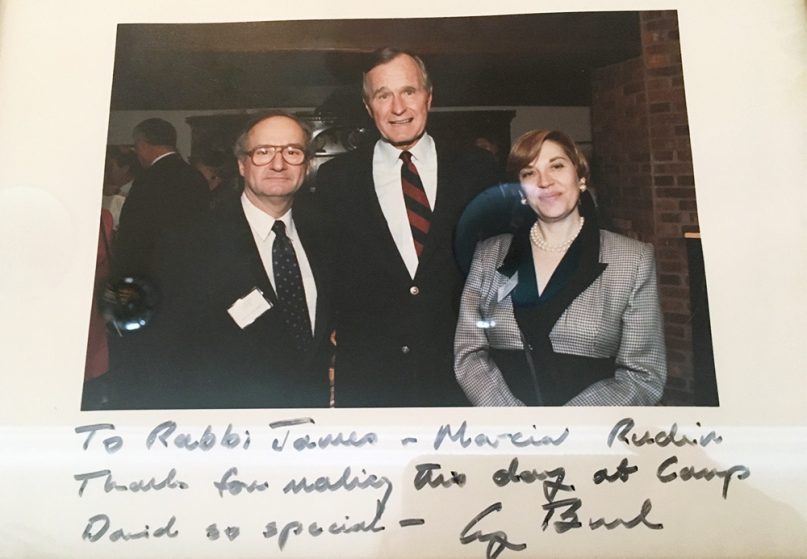 President George H.W. Bush poses with Rabbi James and Marcia Rudin during the dedication of an interreligious chapel at Camp David in April 1991. Photo courtesy of Rabbi James Rudin

President Bush graciously devoted nearly the entire day to the dedication event. Not only did he attend the chapel ceremony and reception afterwards, he greeted each of us in the room where we were served breakfast beforehand, dressed casually for that early morning appearance.

Marcia took notice of his choice of apparel: an “Ivy League style” blue blazer, a bright red sweater, and a pair of cowboy boots, each emblazoned with a large single star. It was the perfect combination of the Texas oil executive he came to be and an authentic Connecticut Yankee — Bush grew up in the Nutmeg State, where his father served as U.S. Senator in the 1950s and ’60s; the president himself attended Yale University in New Haven.

During the carefully crafted interreligious dedication service in which I participated, the president and First Lady sat attentively on the first row of the new chapel. Other members of the Bush family were present along with a host of community, business and political leaders including Republican Senator John Danforth of Missouri, himself an ordained Episcopal priest, and Democratic Senator Howell Heflin from Alabama.

Following the service, a planned outdoor picnic had to be moved indoors because of the rain. My wife and I found seats in the meeting room that often appears on television whenever a president convenes a Cabinet session or meets with foreign dignitaries and their aides.

Just as we began our picnic lunch, the president walked into the room carrying his cheeseburger and a glass of milk. By chance there was one open chair remaining at the large table. The president eyed the empty chair before asking the rest of us, “Do you mind if I sit here? It seems to be the only vacant seat.”

Again, I was tickled that the most powerful person in the world would seek permission to sit at the table with the rest of us.

One seated, Bush chatted easily, falling into conversation with a girl about 10 years old about school. It was easy to forget that the man sitting nearby was, in fact, the American president. That forgetfulness was reinforced by the fact that not once during the entire six hours our group spent with “41,” no staff member rushed to his side to whisper something important into his ear. Nor was the president called away from our event to take a telephone call or meet someone in private. George H. W. Bush was in plain sight for the entire time.

Perhaps April 21, 1991 was slow news day or perhaps little was going on throughout the world that needed the president’s time and attention. But I believe the real reason Bush devoted so much time to his guests was his innate good manners and his belief that an interreligious chapel was an important and welcome addition to Camp David.

And not surprisingly, a week or two after the chapel dedication, Marcia and I received a hand written word of thanks from America’s 41st president along with a photo of the Rudins and the president.

“Poppy Bush” was, like all of us, many things, but as I learned that memorable day at Camp David, he was, above all, a classy guy.