An award for excellent journalism about Muslim Americans was created by a Christian pig farmer and named for a Nineteenth Century Jewish scholar. Maybe this ecumenical nature of the Goldziher Prize is what made it a natural fit for the Religion News Foundation, which is committed to raising funds in order to expand the number of prizes and size of the awards for 2019.

• Joshua Seftel, for “The Secret Life of Muslims,” a multi-platform series of short non-fiction films that reveals the lives of American Muslims through their careers, talents, and accomplishments.
• Samuel Freedman, for a selection of columns in The New York Times from 2010 through 2016 that chronicle American Muslims, emphasizing the normal, productive lives of these citizens, and pushing back against Islamophobia.
• Robin Wright, for “Muslim Heroes, Writers, Artists and an Athlete in America,” a series of five articles in The New Yorker that reflects the rich and many-sided contributions of Muslims to the American experience.

This year, journalists can apply now through December 31, at www.goldziher.org, for one of four cash awards totaling $50,000. Prizes will be awarded for coverage of Muslim Americans by U.S. journalists in the categories of print, video or photography, and audio; one award is reserved for a journalism student.

The prize is named for Ignac Goldziher, a Hungarian Jew born in 1850. He was a brilliant scholar, barred by anti-Semitism from a full academic career. He did receive a fellowship to study in the Middle East, where he discovered Islamic jurisprudence. Although Goldziher never converted to Islam, he wrote that he “became inwardly convinced that I myself was a Muslim, and judiciously discovered that this was the only religion which…can satisfy philosophic minds.”

Goldziher’s story captivated John Kiser, a pig farmer from Virginia who is also an international businessman and author (one of his books helped inspire the 2010 movie “Of Gods and Men”). Deeply disturbed by attacks on American Muslims after September 11, 2001, Kiser created the Goldziher Prize, which has been awarded biannually since 2010 to scholars, activists and journalists whose work counters rising fear and hateful actions toward American Muslims.

Kiser is affiliated with The William and Mary Greve Foundation, a partner in the Goldziher Prize, along with Merrimack College and its Center for Jewish-Christian-Muslim Relations, and now, the Religion News Foundation. By expanding the Prize to include specific categories and students this year, the judges and producers are looking for a wider range of voices. 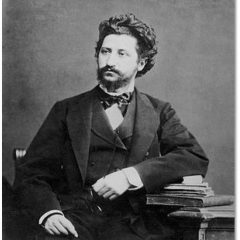