NASHVILLE, Tenn. (RNS) — The sounds of the season filled the halls of the Scarritt Bennett Center at Vanderbilt University on a recent Sunday morning.

In the chapel, a congregation of about 80 people gathered, while the band launched into a holiday classic: “You’re a Mean One, Mr. Grinch.”

They followed up with a cover of Tim Minchin’s “White Wine in the Sun.”

“I really like Christmas. It’s sentimental, I know, but I just really like it,” sang Adam Newton, host for the Sunday service. “I am hardly religious. I’d rather break bread with Dawkins than Desmond Tutu, to be honest.”

Welcome to the “Heathen Holidays,” a Christmas celebration for the nonreligious, hosted by the local chapter of the Sunday Assembly.

It’s a way to celebrate the joy of the Christmas season “without the discomfort of paying homage to any particular religion,” said Nicole Dittrich, one of the attendees.

Many of the people attending the service were in the holiday spirit, decked out in tacky Christmas sweaters. One person was even wearing a red blazer and a red and green Christmas hat to match, complete with pointed elf ears.

The service began with a singalong version of “A Hazy Shade of Winter” by Simon & Garfunkel.

Patrick Horst, who regularly attends the monthly Sunday Assembly Nashville gatherings and serves on the board, said SAN offers what he felt was missing once he left the Christian church.

Especially at the holidays.

“For a lot of people, religion or faith is for a sense of community, for being around people who are like-minded. SAN provides community and a space for us to think about what makes for better living,” he said.

Nashville’s Sunday Assembly is one of several in the Bible Belt, all inspired by the first assembly, which began meeting in London five years ago. The secular congregation celebrates life, according to the organization’s website. 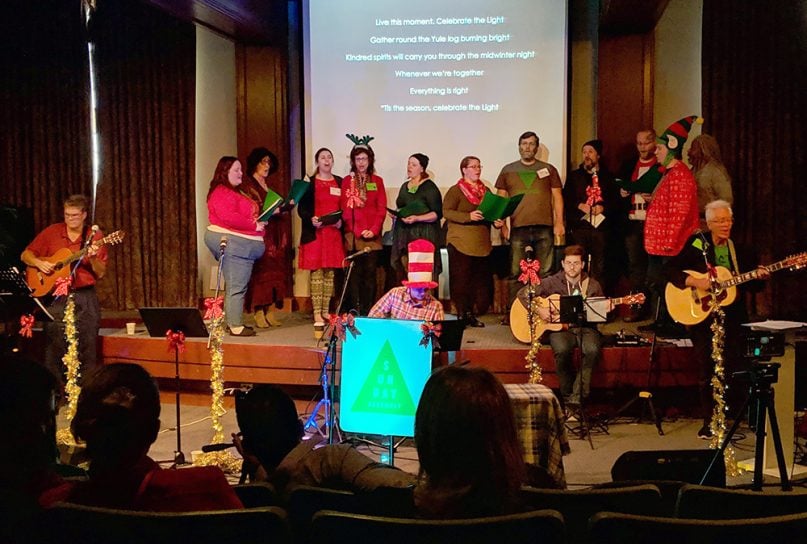 Its sister congregations are also celebrating the secular side of Christmas. The Sunday Assembly in Knoxvillle is planning a Winter Solstice Party on Dec. 22, while an Atlanta group held a Yule-Rock, with live holiday music, singalongs and holiday stories.

A 2017 study by the Pew Research Center found that just over half of Americans (55 percent) celebrate Christmas as a religious holiday, down from 59 percent in 2013.

“There’s a long tradition in America of this kind of thing. This is just a new form of it,” she said. “You bring the feeling of what you’re missing, and that may be similar to what you left.”

Schneider said groups like the Sunday Assembly fill a need, especially for people who used to be part of a church or other religious community but have since left.

“The goods of religion are real. The social cohesion, the inspiration to do better, a space to form connection with people, intergenerational exposure, a place to sing — where else do you get to sing?” she said. “Some of those really basic things really get lost when you leave church. But there is this desire to have those goods without what has become burdensome for whatever reason.”

Christmas is supposed to be a happy time, filled with friends and family.

“And yet,” she said, “sometimes people feel more lost and lonely than any other time of the year. And I think that can hold especially true for those of us who have left the religious aspects of the holiday behind and who might now feel a great loss this time of year, losing the family traditions and the sense of joy and nostalgia that is wrapped up with Christmases past.”

Linda Mercadante, professor of theology at The Methodist Theological School in Ohio, said people who are spiritual but not religious — abbreviated as SBNRs — are still searching for meaning.

“There is this stereotype that SBNRs are shallow and eclectic and that they don’t care about belief — that they just reject it,” said Mercadante, author of “Belief without Borders: Inside the Minds of the Spiritual but not Religious.”

“But I found that they actually cared so much about belief that if they objected to even one belief in a religious context, they would feel honor-bound to leave that religious group.”

Mercadante believes groups like the Sunday Assembly can be a force for good in their communities.

Horst agrees. The motto of Sunday Assembly is to “Live Better. Help Often. Wonder More,” and he believes those tenets can make the world a better place.

“We all just kind of strive to learn about the world we live in and figure out what a better life looks like. With us being social animals, living in an inclusive community is part of that,” he said. “Unlike some secular groups, we don’t try to tell people what’s wrong with a certain belief. We’d rather focus our energies on what makes life better and what it means to be a good person.”

That theme was echoed in the closing song at the Heathen Holidays service.