The long marriage of Christmas and liquor — Christmas “cheer,” as it is sometimes known — has been institutionalized of late in relatively civilized carols and cocktails events like these.

Indeed, knocking one back while singing a Christmas tune has become a preferred way for even secular groups to celebrate Yuletide. Earlier this month, the Hammond Regional Arts Center in Louisiana served champagne cocktails mixed with peppermint schnapps in glasses rimmed with melted chocolate and peppermint sprinkles as visitors requested seasonal favorites from a karaoke machine.

“If we have it, we’re playing it,” said Tara Bennett, the arts center’s media coordinator. “We’re ecumenical to all religions, especially during the holiday season.”

In that same spirit, Amar, a Washington, D.C., charitable foundation, held a “Christmas for a Cause” bash featuring cocktails, carols and an ugly sweater contest — all to benefit Iraqi, mostly Muslim, women entrepreneurs.

Lately even the feast’s patron saint has been driven to drink. The film “Bad Santa,” featuring an alcoholic St. Nick played by Billy Bob Thornton, is regularly named to “Best Christmas Movies to Stream” lists. Search “drunk Santa” on the stock photo service site Shutterstock and you’ll get 37 pages of hits, some barely safe for work. It’s little wonder, perhaps, that the jolly old elf would hie up on the lawn with such a clatter.

The fact is, however, that combining Christmas and booze is deeply consistent with the holiday’s history. 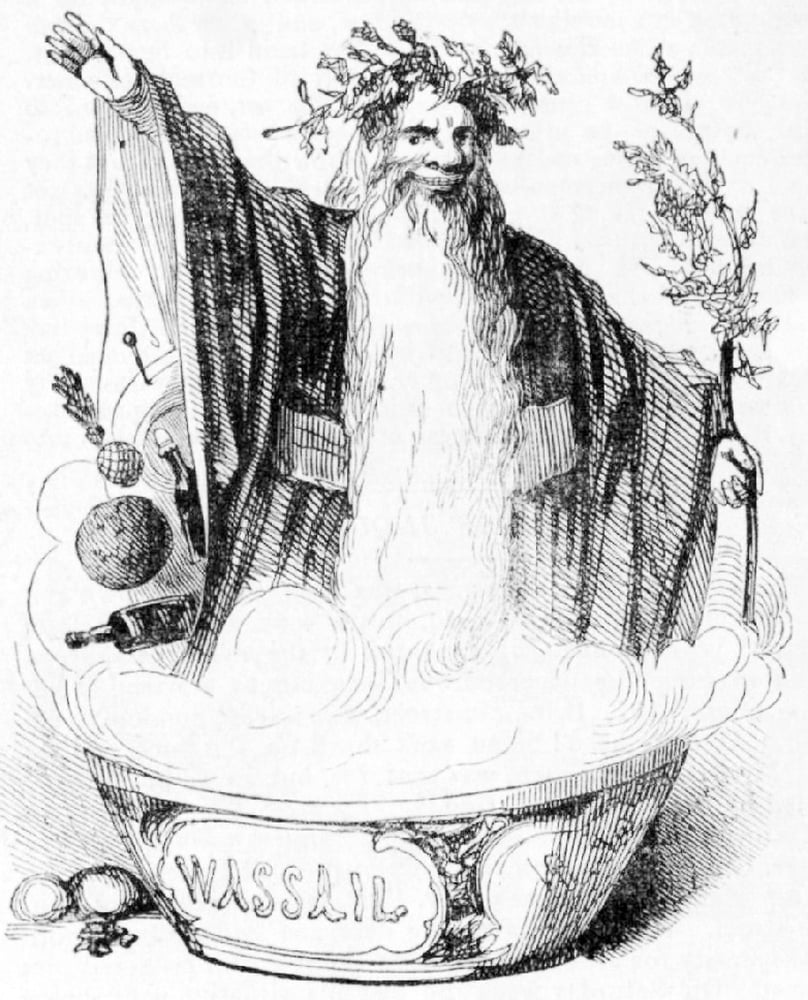 “Old Christmas” image of drinks and ingredients pouring into a wassail bowl from an 1842 publication of Illustrated London News. Image courtesy of Creative Commons

Judith Flanders, a British historian and author of “Christmas: A Biography,” sketches a story of Christmas merriment that would make many a nun blush.

When the church first designated Dec. 25 as Nativity day in the fourth century, Christmas was already more a feasting celebration than a religious one. “Within 30 years of that first celebration, the then-archbishop of Constantinople was already scolding his flock for ‘feasting to excess’ and dancing rather than spending the day in religious observance,” said Flanders.

By the fifth century, “Wassail” (“Good health,” in Anglo-Saxon) was a standard Christmas toast and synonymous with drinking, according to the 12th-century British cleric Geoffrey of Monmouth.

Christmas music was similarly bound up with hooch from the start. The first English (or Anglo-Norman) Christmas carol is really a drinking song. After the first line, “Lords, by Christmas and the host,” the rest is “purely drink,” said Flanders. It continues: “Drink it well. Each must drain his cup of wine, And I the first will toss off mine. … Cursed be he who will not say, Drinkhail!”

By the 17th century, the bishop of Exeter, in southwest England, had called Christmas “the time of the whole year, for eating and drinking.”

Across the pond in the burgeoning Colonies, the boozy flavor of Christmas had survived the Atlantic crossing so well that the Massachusetts Puritan leader Increase Mather chastised Christians for spending the holidays drinking and gambling and in “revellings” and “mad mirth.”

In the 19th century, taverns and inns in the United States often served free alcohol on Christmas, including spiked eggnog. One woman was told that the eggnog would be good if “it’s got Christmas enough in it,” Flanders said. “‘Christmas’ here (was) literally a synonym for alcohol.” Eggnog recipes in the 19th century often had nearly one part alcohol to each two parts of milk.

Looking further back, we find that Nicholas of Myra, the fourth-century Greek bishop who is the inspiration for Santa Claus, is also the patron saint of barrel-makers. A medieval tale centers on three boys who are murdered by an evil butcher or innkeeper and stuffed into pickling barrels. Nicholas arrives, does some detective work and revives the dead boys.

Dramatic productions and paintings long portrayed this story, and over time St. Nicholas came to be seen as the patron saint of children. Though the gruesome nature of the murder mystery is de-emphasized, depictions of the saint often include the three young men he saved and barrels.

“If Nicholas is a patron of barrels, he must also be a patron of what normally goes into the barrel — beer,” said Adam English, chair of Christian studies at Campbell University and author of “The Saint Who Would Be Santa Claus: The True Life and Trials of Nicholas of Myra.”

Accordingly, Samichlaus beer, which packs an alcohol content of 14 percent, is traditionally brewed on Dec. 6, St. Nicholas Day, though English pronounced it “not very drinkable in my opinion.”

English pointed to a direct reason for pairing drinking and Christmas: “Barrels of new beer finally became ready to drink in December,” he said. Fueled by suds, raucous Christmas revelers celebrated the holiday well into the 19th century by caroling door to door for money, meat and liquor. “The domestic, familial, sentimental, quiet Christmas is a fairly recent innovation,” said English. 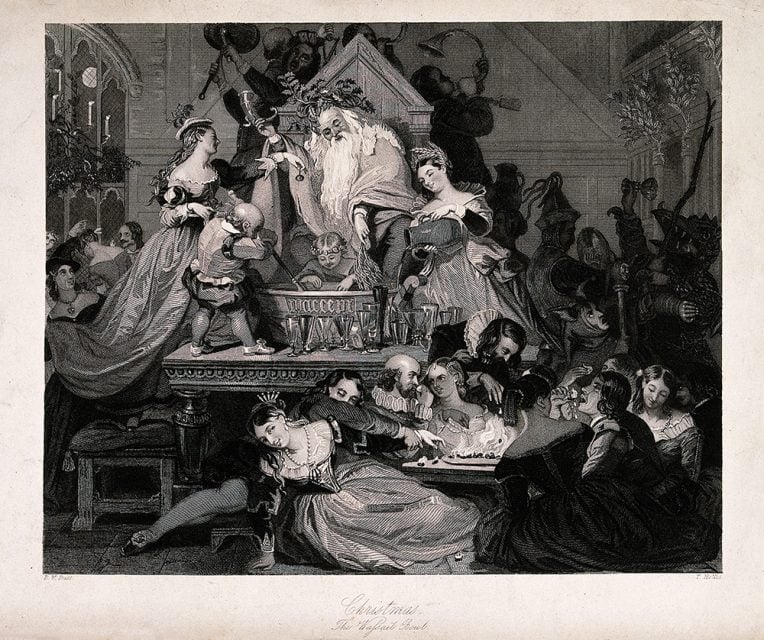 “Christmas. The Wassail Bowl” by Thomas Hollis, from 1851, shows drinking and merriment for the holiday. Image courtesy of National Galleries Scotland/Creative Commons

It makes sense that these more celebratory aspects of Christmas attract more than Christians. Some 90 percent of adult Americans, including more than 80 percent of non-Christians, celebrate Christmas, according to the Pew Research Center, even as most believe the holiday’s religious aspects are increasingly de-emphasized. (On the other hand, just 16 percent go caroling as adults.)

Just counting Christians, approval for Christmas boozing varies from evangelical Christian leaders, who are evenly split on whether a drinker can be a good Christian, to 19 percent of all Protestants who find imbibing sinful, while Catholics are less likely (12 percent) to consider drinking sinful than the general public (15 percent).

In recent years, some mainline Protestant leaders have expressed concern about the ubiquity of alcohol in church culture, captured in the old saw, playing on the Scripture verse Matthew 18:20, that says, “Where two or three are gathered, there’s a fifth.”

In 2015, the Episcopal Church’s General Convention passed a resolution acknowledging the church’s “long-standing tolerance for the use of alcohol” and urged congregations not to hold events, such as cocktail parties and wine tastings, where alcohol is the primary attraction. After a newly elected Episcopal bishop killed a bicyclist in Maryland while driving under the influence, this summer’s convention in Austin, Texas, followed up with recommendations to take action on “leadership impairment due to alcohol and substance misuse and behavioral addictions.”

Given the symbiotic relationship between drinking and singing, however, it’s likely that cocktails and carols is here to stay. Ronald Clancy, who publishes Christmas music collections, sees little problem with churches bringing people in with bibulous musical events. “I can see that as not being a bad idea, if they put a stress more on the sacred than they do on the secular,” he said.

He suggested starting with “Chestnuts Roasting” and other secular songs before moving to “Silent Night,” “Adeste Fideles” and “O Come, O Come, Emmanuel.”

If the drinks keep coming, the crowd might not even notice.