Gretchen Harrison’s voice cracked as she recounted in harrowing detail her escape on Nov. 8 from a ferocious wildfire that drove her from Paradise, the idyllic mountain town in the foothills of the Sierra Nevadas that she’s called home for 26 years.

“Every day felt like camping — the air smelled fresh and good and clean and you’re above the fog that sometimes sits in the valley. You get deer walking through your yard and the squirrels and bears and skunks. It’s just peaceful,” Harrison said, wiping tears from her eyes five weeks after her home, her church and most of the town burned to the ground.

Like nearly all of her neighbors in Paradise, Harrison lost most of her earthly possessions to the Camp Fire, the most destructive wildfire in California’s history. It ravaged more than 150,000 acres in Butte County, killing 86 people, destroying nearly 14,000 homes and 500 businesses and leaving more than 50,000 residents displaced, including Harrison, her husband, Rob, and their three youngest children. (Her eldest son is married and lives out of state.)

The Harrisons not only lost their house, where Rob Harrison, bishop of a local ward of the Church of Jesus Christ of Latter-day Saints, was born 49 years ago, but also the house they owned next door, where his mother was born in 1938.

Many Paradise neighbors lost homes that had been in their families for generations.

“Years and years and years — you’ve lost that connection,” Gretchen Harrison told Religion News Service. “But I have no doubt that people are going to come back here and rebuild…. The feeling of Paradise will come back.” 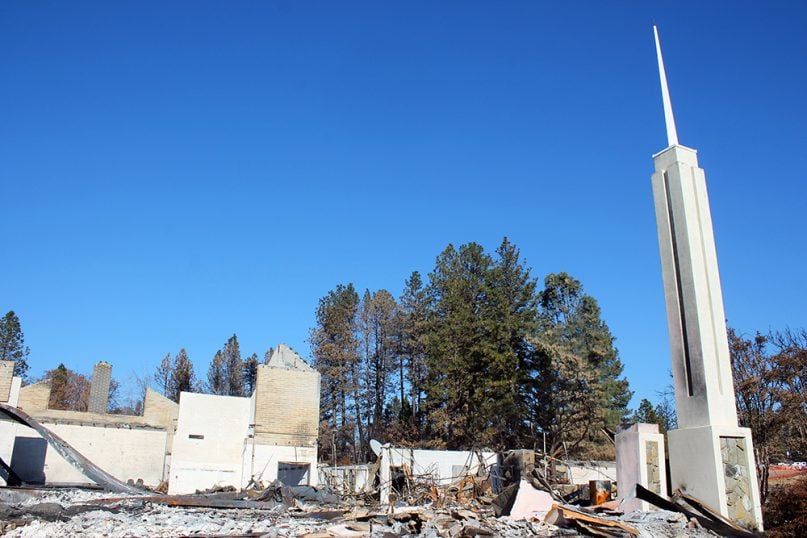 The Camp Fire was so hot that it melted a steel beam that supported the roof of the First Ward Meetinghouse, one of two Church of Jesus Christ of Latter-day Saints chapels in Paradise, Calif. RNS photo by Cathleen Falsani

It’s a sentiment shared by many in this small city of spectacular vistas snuggled between two alpine valleys with the soaring Sierras in the distance. The pre-fire population of Paradise was about 27,000. They might not all be able to return soon or even ever, but there is a stubborn (or perhaps hopeful) resolve that permeates here — you may be able to burn paradise to the ground, but you cannot destroy it.

“Paradise will rise again,” reads a message on the marquee in front of Paradise Cinemas, which survived the wildfires seemingly unscathed.

But how do you rebuild Paradise?

It’s a question with profound social, environmental and even spiritual implications that undoubtedly will take years to answer.

The wildfire was so hot and moved so quickly it didn’t just burn homes and other structures — it practically melted them. At the LDS First Ward Meetinghouse on Buschmann Road, a steel beam that once supported the roof now sits amid the ashes like a twisted pool slide.

What remains of the thousands of homes and businesses filled with appliances, plastics, electronics and other modern materials that burned in the fire is largely toxic ash. The cleanup will take many months if not much longer to complete.

Ten days before Christmas, Paradise remained closed to most residents, but the town hummed with the sound of chainsaws as cleanup crews filled residential streets with heavy machinery. Near a cul-de-sac where all that remained of large homes were the shadowy footprints of their foundations, forensic scientists wearing safety masks, hard hats and white coveralls picked through the ashes.

Hundreds of fireplaces and chimneys stood like altars amid the blackened silhouettes of charred trees, marking the sacred spaces where homes once stood and memories linger, waiting to be properly grieved by families who had yet to see what, if anything, remains.

Paradise police public information officer Matt Gates has been posting videos shot around the town so displaced people can have a better sense of the extent of the devastation before they see it in person when they are able to return.

“I need to make sure that they’re just mentally prepared a little bit,” said Gates, who also is a member of the LDS community in Paradise. 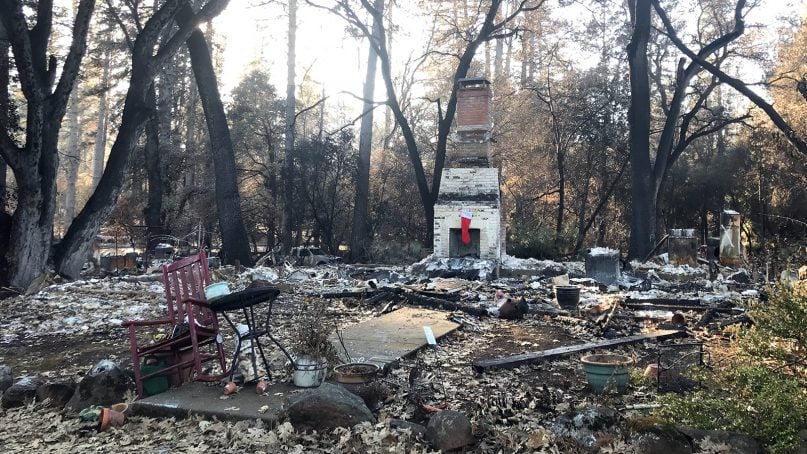 Charred trees surround the remains of a former home in Paradise, Calif., including a fireplace that was adorned with a single Christmas stocking in mid-December. RNS photo by Cathleen Falsani

Until last month, Latter-day Saints had two meetinghouses or chapels in Paradise. Only one remains intact. In their ward of about 650 families, Gretchen Harrison said perhaps five members’ homes survived the fire. The rest were destroyed.

“We don’t know how soon we will build a replacement chapel but when we do, it will reflect the important Christian principles of stewardship and respect for creation,” said Josh Cook, regional director of public affairs for the church.

In 2010, Bishop H. David Burton, then-presiding bishop of the LDS Church, affirmed its commitment to conservation by announcing the integration of new green design elements for church buildings worldwide intended to reduce energy use by 30 percent.

“We love mother Earth and we know it’s one of God’s creations and it’s our obligation to be careful with it,” said Bishop Drake Brown, director of the LDS Institute of Religion in Chico and former president of the church’s Chico stake.

After recent rains, a blanket of new, bright green grass pushed its way through the scorched earth, providing a verdant contrast to the apocalyptic landscape of blackened trees and ash-covered foothills along Skyview Drive, one of the three routes into and out of Paradise.

“The environment’s pretty resilient,” Brown said. “I know that we need to do some things to take care of toxic waste and I’m glad that they have a big plan to do that, but I think we’re going to be surprised how quickly it looks beautiful again, I hope.”

Throughout drought-stricken California, wildfires are a natural part of the forest ecosystem. In Paradise, four significant fires have threatened the town in recent years, including a blaze in 2008 that forced evacuations and destroyed 200 homes.

Two days before the Camp Fire broke out at 6:30 a.m. Nov. 8, the utility company Pacific Gas & Electric had sent messages to residents in nine counties, including Butte, warning them of a potential, planned power outage to try to minimize the risk of sparking a fire in the midst of ideal conditions for a wildfire.

The thick bushes and brush that congregate between and around the ankles of tall pines are the ideal fuel for wildfires. Combined with low humidity and high winds that quickly carried embers from the outskirts of Paradise, where the fire is believed to have begun on Camp Creek Road, into the more densely populated parts of town, the setting created a perfect firestorm that decimated an entire community in a matter of hours.

Gretchen Harrison and her family had to evacuate their home during the 2008 wildfire, and they lost a house they owned and had rented out to tenants to the Saddle Fire in 2016. And when she was 5 years old, her family home in Gridley, about 30 miles south of Paradise, burned down after high winds caused power lines to spark near the house.

“We’ve had to rebuild before, but this time is different,” Harrison said.

Everyone in the community has to start over and decide where and how to do it.

For now, the Harrisons have been staying with family in Gridley and have begun putting in bids on homes in neighboring Chico. But the process is slow as demand for housing far outweighs supply.

Still, Harrison is counting her blessings. Her husband and children are safe. The family had insurance that will allow them to, someday, rebuild in Paradise. What they lost is replaceable, and somewhere in the wreckage, she believes, there is a lesson.

“I’m going to be a better person for this and if that’s what my heavenly father’s intent is from this experience, I need to figure that out and I need to learn what I need to learn,” she said. Gretchen Harrison sits next to her beloved nativity set on the porch of the historic Bidwell Mansion in Chico, Calif., across the street from the LDS Institute of Religion on Dec. 15, 2018. RNS photo by Cathleen Falsani

Harrison already has a plan for their dream house to come: a farmhouse with a big, open kitchen where her large extended family can gather, including the grandchildren she expects will have arrived by the time they are able to rebuild in the town where their family has lived for nearly a century. And Harrison also hopes to incorporate green measures to ensure their new home is environmentally friendly, unlike the 1968 house they lost in the Camp Fire.

“I’m sure there was asbestos in there somewhere,” she said, grimacing.

As she prepared for Christmas in diaspora, Harrison was struck by pangs of loss for a hand-carved wooden nativity set her parents had bought for her while on an LDS mission in Germany years ago. It had sat in a special box in her closet, ready to be grabbed during a fire or other emergency, but in the frenzy to evacuate in just a few minutes as a wall of flames barreled toward her home, the box got left behind.

Days later, a surprise package from her brother arrived: Their parents had given him a nearly identical nativity set, and he sent it to her.

“I don’t have anywhere to put it right now,” Harrison said, smiling wistfully. “But I will.”