DALLASTOWN, Pa. (RNS) — The first book that Byron and Beth Borger sold at the Hearts & Minds bookstore was a copy of Victor Hugo’s “Les Miserables.”

For the Borgers, it was a perfect fit.

But their customer was a bit perplexed since the book isn’t standard fare at Christian bookshops.

Hearts & Minds has long been an anomaly in the world of Christian retail.

The Borgers, who previously worked for a Christian campus ministry group, launched their Dallastown store during the faith-based-bookstore boom times of the 1980s. They bucked evangelical conventions by including Catholic writers such as Thomas Merton, tackling topics like racial justice and featuring books by spiritual formation proponent Richard Foster, whose take on the Christian life was considered radical.

Back in the day, they faced boycotts, pickets and even death threats from the Ku Klux Klan over a display of books from Martin Luther King Jr., said Byron Borger. The store survived them all — and thrived for years, attracting fans among customers and authors.

With ongoing demise of Christian retail stores, consolidation in the Christian publishing industry and the continued dominance of online sellers such as Amazon, the future of this idiosyncratic venture is uncertain.

In recent years, the Borgers have cut back on staff and dipped into their savings to keep the story going.

Despite the struggles, Hearts & Minds has a loyal following, readers who appreciate the couple’s wide-ranging knowledge of the Christian book scene.

The store appeals to mainline Protestants and what Beth Borger refers to as “thinking evangelicals” — Christians with traditional beliefs about theology whose faith prompts them to care about injustice. There are more than a few in the mid-Atlantic and Midwest regions, where Hearts & Minds draws most of its support, said Beth Borger.

“Thinking evangelicals are one of our core customer-based groups and frankly, I think there are a lot of them around. I don’t feel like a lonely voice,” she said. 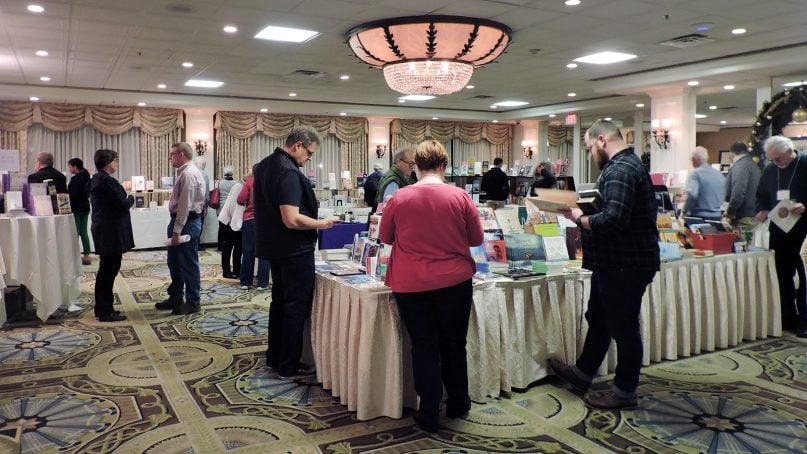 A third of the Borgers’ business involves traveling to conferences and other events, like the annual clergy retreat of the Episcopal Diocese of Pennsylvania, where Byron Borger’s book recommendations at the speaker’s mike were a prominent part of the fare and the adjoining room became a pop-up retail venue.

But even those “fun” events mean that the pair must spend many hours on the road and cart books back and forth from their store to hotels and convention centers, he said.

They haven’t had the money to put their entire stock online and the point-of-sale software needed would require another full-time staffer.

“Our website is not what it should be,” he said.

The Borgers’ struggles come at a time of continued turmoil in the Christian retail world. In 2017, the nation’s largest Christian merchandise chain, Family Christian bookstores, went out of business, shuttering more than 240 stores across the country.

At the same time, said Publishers Weekly religion editor Emma Wenner, there’s an increased interest in books on religion and spirituality, including those for the so-called nones, people who may be looking for answers but don’t identify with a particular faith.

“Publishers are doing OK,” she added. “It’s the retailers who are really suffering. The retailers have to find the book buyers.”

That’s led to a kind of love-hate relationship between bookstores and publishers.

“It used to be that writers wrote books, publishers published them, and bookstores sold them,” said Byron Borger. “Now writers have to market their books and publishers sell them half-off.

“They are our friends one day, enemies the next.” 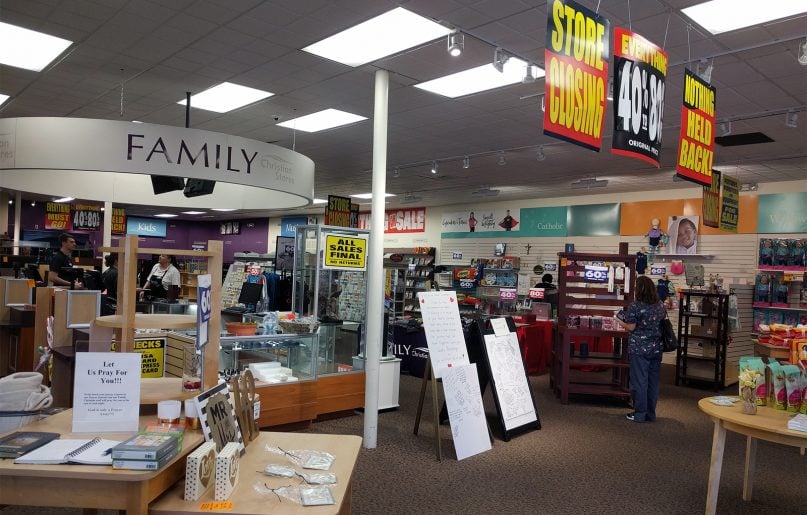 A Family Christian Store has a liquidation sale in Simi Valley, Calif., in April 2017. Photo courtesy of Creative Commons

The challenges facing Christian retail extend beyond the relationship between authors, publishers and sellers. This past year saw the apparent failure of the Association for Christian Booksellers.

“The CBA board brought in someone they hoped had the key to developing greater business for Christian retailers,” wrote Christine Johnson, a managing editor at Charisma Media, in an email. “Unfortunately, it didn’t work out that way.”

A new group, the Christian Retail Association, formed last year, hopes to fill the void left by the CBA, according to industry veteran Bob Munce, the head of the Munce Group.

“We have two domestic trade shows a year and are the only other industry shows,” he said in an email. “One of our shows will now be the international show. I believe we have the backing of the industry to fulfill this need. We also plan to offer a set of services to the Christian book industry through CRA.”

Even given all the changes in an industry in flux, the picture for independent bookstores as a group is positive, according to Judith Rosen, a contributing editor at Publishers Weekly.

A recent report by the American Booksellers Association, the independent bookstore trade group, found that as mid-December, sales were up by around 5 percent over the previous year.

“Many stores are seeing an uptick in online sales,” said Rosen. “What they are finding, and what the ABA is stressing, is that pre-orders are really successful.”

A personal connection and the conviction that they are supporting a local business also appeal to buyers, Rosen said.

“A lot of independents have made the case to their readers — they need to support them,” she said. “Many independents are thriving — they find a way.”

“People go to Christian retail stores and buy books to keep them in business,” Wenner said. “There is a great deal of customer loyalty to the bookstores themselves.” 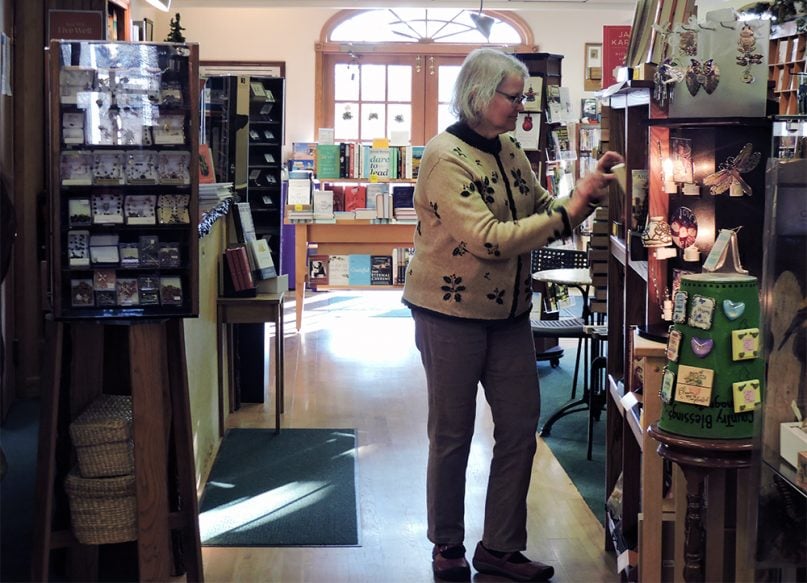 That’s certainly true at Hearts & Minds, which has a loyal fan base both among book buyers and the authors who have developed personal connections with the Borgers.

When Fea gave a book talk there last summer, “the place was packed,” he said, estimating a crowd of roughly 200 people came.

Fea appreciates that Hearts & Minds’ shelves are filled with books, rather than  a vast array of “kitschy” Christian products like figurines, diaries and framed Bible verses.

“It’s actually a bookstore because Byron’s theological conviction is that you can worship God with your mind,” he said.

Liberty University English professor Karen Swallow Prior said she first learned of Hearts & Minds when the Borgers agreed to stock her first book back in 2012.

“I’ve been a fan of theirs ever since,” she said. “They are rare in so many ways, a local store with a national presence.”

While serving Christian readers, their perspective is not confined to a narrow slice of that audience, she said.

“I would just encourage people to be more intentional about buying more books from brick-and-mortar stores,” said Prior.

Byron Borger still has a bucket list for the store. He’d love to share the couple’s love for Christian books with other independent booksellers.

“I wish we could take our curated stuff and go to the best bookstores in the country,” he said. “They really don’t understand Christian books, or they don’t care to.”

For now, the Borgers, who are both 64, plan to keep the store going. What else can they do, said Beth Borger.

“We’ve got no money, so we don’t know what to do with ourselves,” he said.

And they still love the work. Being “small-town is part of our charm,” he added. So are the email conversations they have with online book buyers.

That one-on-one interaction is time-consuming but rewarding, said Byron Borger. And it fits the store’s personality.

“Is there a way of being online and still being small-scale, inefficient almost on purpose?”