WASHINGTON (RNS) — Only in the nation’s capital, sorely feeling a lack of trust in American institutions and leaders, would a crowd of 400, including several high-profile politicians, pack an auditorium to hear a reporter, a data expert and an apostle of the Church of Jesus Christ of Latter-day Saints discuss the Watergate scandal.

On Monday evening (Jan. 14), just such a group came to the Newseum, just off the National Mall, to attend “Integrity & Trust: Lessons from Watergate and Today,” organized by the Deseret News, which is owned by the LDS church.

If an odd collection, the panelists were quick to show how their reflections on Watergate echoed each other by calling on their respective expertise — journalism, data and faith.

It was through those lenses, too, that Bob Woodward, the legendary Washington Post reporter who broke the Watergate story with Carl Bernstein; Michael Dimock, president of the Pew Research Center; and Elder D. Todd Christofferson, a member of the LDS church’s Quorum of the Twelve Apostles (who also sports a lengthy legal career), explained the significance of Watergate, and its continued relevance.

During his opening remarks, Christofferson drew upon his own experience during the Watergate era, when he was a 28-year-old law clerk for Judge John Sirica of the U.S. District Court for the District of Columbia, in whose offices Christofferson became one of the first to hear the infamous Watergate tapes.

He said Watergate left him “disappointed, but not disillusioned,” with government and drove him to advocate for higher values. He drew a direct line between his involvement in the Watergate investigation and his current work as a faith leader. 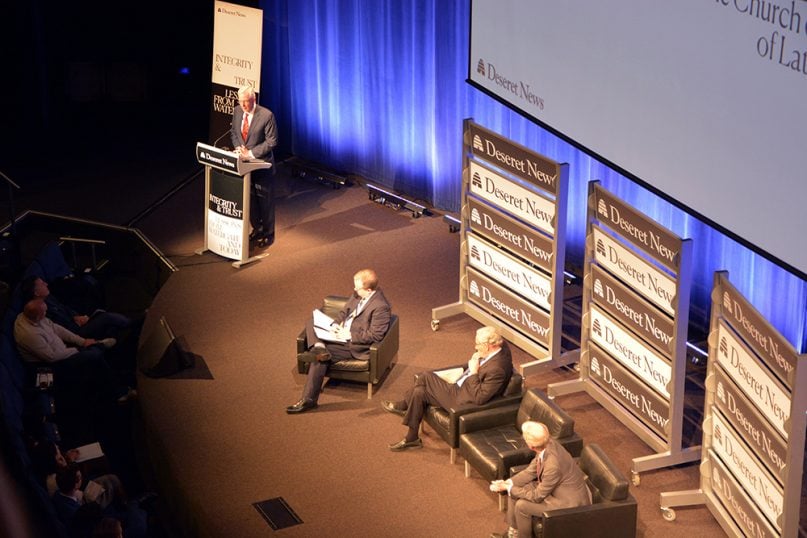 Elder D. Todd Christofferson, at podium, a member of the LDS Church’s Quorum of the Twelve Apostles, speaks during the “Integrity & Trust: Lessons from Watergate and Today” panel at the Newseum on Jan. 15, 2018, in Washington. Christofferson was joined by Boyd Matheson, from left, Deseret News opinion editor; Bob Woodward, author and legendary investigative reporter at the Washington Post; and Michael Dimock, president of the Pew Research Center. RNS photo by Jack Jenkins

“Out of that experience, I resolved to be more committed to the teachings of my youth, recognizing that people can go wrong, even regular folks and apparently decent, somewhat normal people — and even accomplished people,” he said.

“I’ve been anxious since that time to do what I could to promote those values that I was blessed with, and the traits of integrity, as broadly as I can — especially among the rising generation,” Christofferson added. “My position within the Church of Jesus Christ of Latter-day Saints fortunately gives me that opportunity, and as we say, a ‘bully pulpit,’ to preach that gospel.”

Christofferson and Woodward noted that leaders in multiple professions — politics, journalism or religion — are prone to “pomposity,” which, Woodward argued, was part of Nixon’s downfall.

“That’s a danger,” Christofferson said. “I think we’ve got to feel accountability always, to God if nowhere else.”

When Christofferson recounted how humbled he felt as a lowly law clerk surrounded by press as he delivered news about the Watergate investigation — only to be ignored later that day when other information broke — Woodward jumped in.

“A lot of people thought you were Deep Throat!” Woodward exclaimed, using the code name for the source who leaked inside information to him throughout the Watergate scandal. (The real Deep Throat was revealed in 2005 to be FBI Associate Director Mark Felt.)

Christofferson responded with a sheepish smile that triggered laughter from the crowd, which included prominent Mormon Utah politicians such as Sens. Mike Lee and Mitt Romney, Rep. John Curtis and Rep. Ben McAdams, a lone Democrat.

At one point Woodward appeared to playfully acknowledge the presence of Romney, the GOP’s 2012 nominee for president. While attempting to explain the unique psychology of presidents, the reporter asked the crowd, “How many people here have been elected president of the United States?”

He then sparked additional laughter by pointing at Christofferson and adding, “Not even…”

“Not yet!” Christofferson replied.

Dimock, for his part, noted that distrust of politicians is a long tradition in America, but he cited an array of Pew data signaling spikes of distrust in both institutions and each other — in large part due to partisanship.

“Every measure is imprecise in its own ways, and I think part of where we’ve come as a society is that we probably expect too much of our measures — we expect perfection. If something is off a little bit, we take it as a lie,” Dimock said. “The journalist gets the one piece wrong, even if they were trying hard, you can discount all of it.”

Woodward argued that his work as a journalist requires a heavy degree of skepticism, but he insisted that appropriate levels of skepticism are lacking in the current administration.

“I mainline doubt,” he said, before turning to Christofferson. “The people in your world, the religious and spiritual world, the most thoughtful ones, also mainline doubt, and know that you are living in a world (without) absolute certainty — is that true?”

Christofferson replied: “As we say as we talk about inspiration and revelation: You have to know when you haven’t received it.”

News
Mexican-born bishop chosen to soon lead the Diocese of San Bernardino
News
At Bishop Barber’s NC church, Pete Buttigieg works to woo black voters
Faith
Chief rabbi’s attack on anti-Semitism keys reckoning over faith in UK election
Faith
The priest who channeled Black Power into the Catholic Church
Signs of the Times
Will the world end with a bang, a whimper — or Christ?