CHICAGO (RNS) — Pastor James MacDonald will take an “indefinite sabbatical from all preaching and leadership” at Harvest Bible Chapel, the influential Chicago-area megachurch he founded more than 30 years ago, as the church seeks to address continued criticism alleging a culture of intimidation and little accountability for its leadership.

The move comes a week after Harvest dropped a defamation lawsuit against two bloggers, their wives and a freelance reporter, following a court ruling that documents subpoenaed in the case could be made public.

On Wednesday (Jan. 16), Harvest Bible Chapel’s governing elders announced on the Harvest website a “peacemaking process that seeks both reconciliation and change where needed.”

In a statement included in the announcement, MacDonald said, “I am grieved that people I love have been hurt by me in ways they felt they could not express to me directly and have not been able to resolve.

“I blame only myself for this and want to devote my entire energy to understanding and addressing these recurring patterns.”

The lawsuit was filed in October after the two bloggers, both former church members, had written critically about MacDonald on their blog, The Elephant’s Debt.

The suit also named Julie Roys, who at the time was working on an investigative article about the church for World Magazine. Published last month in the evangelical magazine as “Hard Times at Harvest,” the article recounted the public excommunication of several former elders at the church who had criticized MacDonald and his disbanding of Harvest’s church-planting network. It also alleged financial and organizational mismanagement.

MacDonald admitted in Wednesday’s announcement to battling “cycles of injustice, hurt anger, and fear which have wounded others without cause,” saying his pattern of behavior “can only be called sin.”

And elders wrote they had “tried a variety of different strategies to address external criticisms over the past several years.”

“It has become apparent that these efforts have failed to fully identify and address our personal failures, sins, and errors in leadership, thus perpetuating a continuation of the criticism.”

Harvest’s peacemaking process, the elders said, will include working with two unnamed ministries to select a team of conciliators and organizational consultants to guide the church through a comprehensive review process.

The elders also plan to reach out to those who have left or criticized the church, “listening carefully to their insights and correction, and asking God to enable us to confess our sins and make needed changes in our leadership,” according to their online statement. And they said they will examine the church’s organizational, financial, management and leadership policies and practices to make sure they meet professional best practices.

MacDonald has recused himself from the peacemaking process and pledged to participate “wholeheartedly” in whatever ways he is asked.

But The Elephant’s Debt pointed out in a post Tuesday that the pastor has said he still may continue to preach through the winter at Harvest’s campus in Naples, Fla.

“Either MacDonald is currently fit to preach at all campuses or he is not fit to be (preaching) at any of them,” according to the bloggers.

That’s one reason, they wrote, that they find it difficult to read the announcement as “anything but yet another attempt to spin a story.”

“Given all that’s occurred, including a baseless lawsuit for which Harvest has still not apologized, what’s required now is not a ‘peacemaking process,’ but confession, repentance, and resignations,” she wrote on her website. “There can be no true peace without it.” 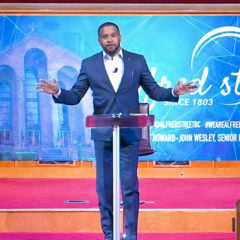 Christianity
James MacDonald returns to pulpit for first time since ouster from Harvest Bible Chapel
Follow us on Facebook!
Submit your photos to RNS