As founding pastor of The Journey church, Patrick would begin each year preaching about the 10 mistakes he’d made as pastor, says longtime church member Bob Oesch.

Patrick’s down-to-earth preaching style and transparency helped the church grow from a group of 100 people meeting at a community center to a megachurch of 3,000 meeting in six locations — until his mistakes caught up to him.

In 2016, Patrick, who was also a vice president of the Acts 29 church planting network, was fired from The Journey for what church officials said was misconduct, including “inappropriate meetings, conversations, and phone calls with two women” and a pattern of sinful conduct, including lying, abuse of power and lack of self-control. 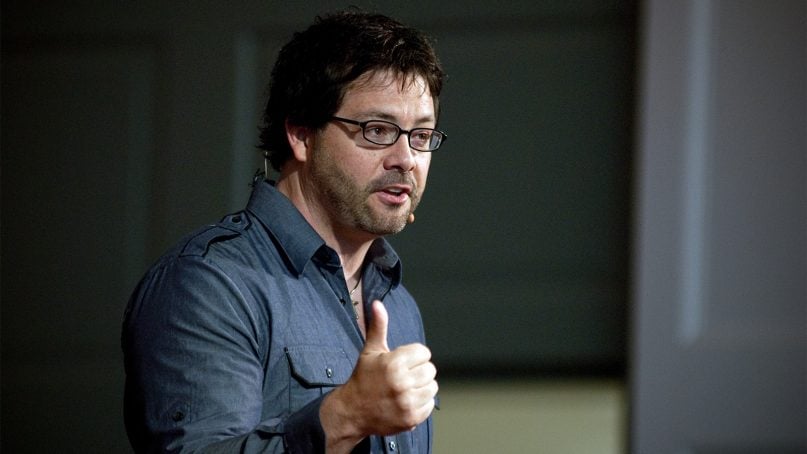 The Journey’s former pastor is now on staff at a megachurch in Charleston, S.C. The Journey has moved on, said Oesch.

“My sense of The Journey is that things are calm, are organized, that our leadership is committed and that communication from church leaders has been very good lately,” he said.

Attendance is down 14 percent since the firing, according to the church. 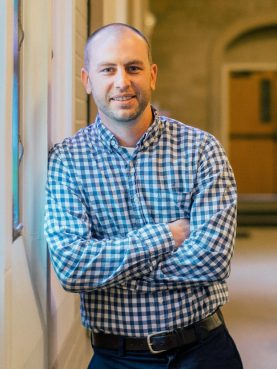 “We didn’t have a formal process for people communicating reasons for leaving, but the consistent feedback we got from people that left was that they were leaving because Darrin was their main connection to The Journey,” Tim Holley, the church’s new executive pastor, who oversees the entire church, told RNS in an email.

At the structural level, the church has made changes since Patrick left, Holley said.

It formed a “leadership team” of 14 people to try to ensure accountability from pastors and staff and plurality in decision-making so that it is not the top pastor alone shaping the church.

The church also increased the number of women in director roles.

“We have been intentional in seeking to have a diversity of voices speaking into who we are as a church and how we go about making decisions,” said Holley. “If we want to be a church that sees our city transformed, then that has to be reflected in our leadership.”

In other respects, the church is continuing on the path that Patrick started, and among those who remain, there appears to be optimism about the future.

On a weeknight in December, a crowd made up largely of 20- and 30-year-olds packed a backroom of a local microbrewery for “Theology at the Bottleworks,” a popular discussion group, to discuss “loneliness in America.”

The moderator started by sharing that in 2017 the U.S. surgeon general had declared loneliness a public health crisis. She then asked for examples from pop culture that dealt with such isolation. One person mentioned the movie “Frozen.” Another talked about the book “Bowling Alone.” The conversation flowed for more than an hour. 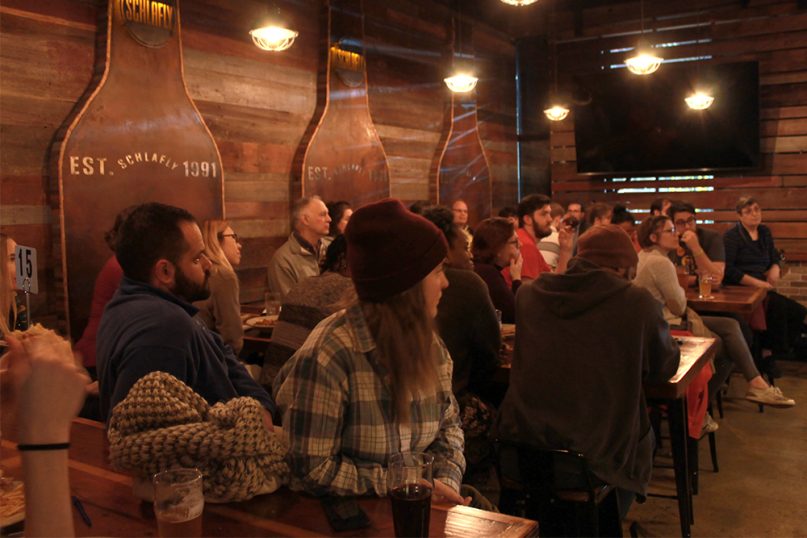 People attend Theology at the Bottleworks at the Schlafly Bottleworks microbrewery in Maplewood, Mo., on Dec. 19, 2018. The Journey organizes the monthly event. RNS photo by Eric Berger

“I’m psyched it’s still going,” said Jon Richard, owner of Vertical Voyages, a local company that offers tree- and rock-climbing experiences. He knew Patrick and briefly had an outdoor ministry through The Journey.

Richard is glad to see the church is still reaching out.

“I think it’s really important that we dialogue and interact with people that are different than us,” he said.

That sort of interaction is also taking place at the church’s Hanley Road branch in St. Louis.

In 2015, The Journey and Kol Rinah, a Conservative Jewish synagogue, announced that they would swap buildings. As they renovate, the two congregations have shared space and gotten to know each other.

“At a time of great national division, in a location that represents the historical divides still present in St. Louis, these two disparate faith bodies are worshiping under the same roof, learning from each other while being true to their own beliefs,” a columnist wrote in the St. Louis Post-Dispatch.

A Kol Rinah rabbi and Pastor Carlos Smith, who leads the Hanley Road congregation, also recently traveled together to Israel. Members of both congregations filled an auditorium on a Sunday in December to hear the clergy reflect on their trip. Pastor Carlos Smith of The Journey and Rabbi Noah Arnow of Kol Rinah, sitting on stage, discuss a trip the two made to Israel during a lunch with members of both congregations. RNS photo by Eric Berger

At the weekly service prior to the talk, Smith described a childhood in Detroit when there were times where there was “a little more month than there was money.” One day on the city bus home from school, when he and his infant sister did not have any money, he found $40 on a seat.

That raised some ethical questions, said Smith. Should he keep the money and use it to feed the family? Or turn it in?

“I just say, ‘In God we trust,’” Smith said to applause and laughter. “And Jesus put some food on me and my sister’s table that night. Let me tell you something: I don’t care where you are or what you’re doing, you have a God that will provide for your physical needs.”

Sarah Gentry, a counselor at a nonprofit child welfare agency, said Smith has given the congregation “new energy, giving new vision and focus.”

“We have had some good leaders in the past, and I think he is trying to carry on some of that vision but also create a new one” in their new home in University City, she said.

The theology discussions at Bottleworks are part of a larger initiative called Midrash St. Louis, an arm of the church that includes film screenings and art talks. The idea is to “provide conversations that matter,” according to the Midrash St. Louis website.

The church is also still heavily involved in Mission St. Louis, a nonprofit ministry that aims to end poverty in the city. 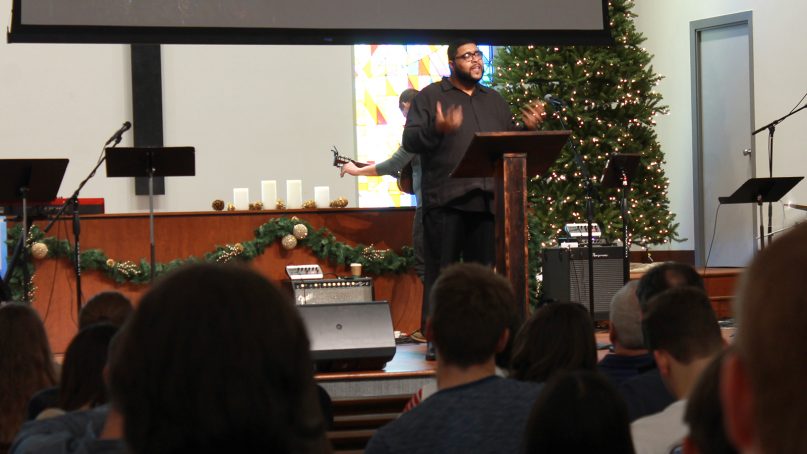 Patrick “established the DNA of being an outward-facing church, with an intentionality of saying that we want this to be about the communities that we’re in and wanting to seek the good of those communities,” said Holley.

When the church elders fired Patrick, they connected him with PastorServe, an organization that helps clergy and congregations in such situations. In the letter, the elders wrote that they “love Darrin deeply and have committed to a long-term plan of personal restoration for him and devoted care for his family.”

Patrick confessed to his misdeeds and wrote in a letter that accompanied the church’s that he was “utterly horrified by the depth of my sin and devastated by the terrible effects of it on myself, my family and so many others, including all of you.”

He has since become a teaching pastor at Seacoast Church and continues to have more than 43,000 followers on Twitter. He and Seacoast leaders declined to be interviewed, but a spokesman wrote in an email that “We love having Darrin as a part of the Seacoast family and are excited to see what God does through him.”

The Journey’s members seem willing to forgive their former pastor.

“We’re all human and there are parts of my own life that I’m not proud of and I try not to put unrealistic expectations on our leadership,” said Gentry.

Richard, who describes himself as a skeptic, still occasionally attends services and Theology at the Bottleworks.

He misses Patrick at times and said that he appreciates what The Journey’s former pastor accomplished.

“I thought that he was a gifted teacher and built a solid church,” he said. “And the church is still going.” 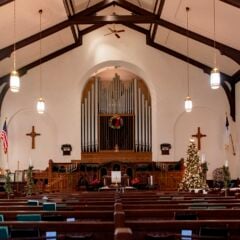 Opinion
This Lent, give up mixing faith with political terrorism
Follow us on Facebook!
Submit your photos to RNS