PANAMA CITY (AP) — Pope Francis has sought to inspire Panama’s young people, its prisoners, its politicians and its bishops. On Saturday he turns his attention to the country’s priests and religious sisters as he reaches the midway point in his Central American visit.

Francis will celebrate Mass in the Santa Maria La Antigua cathedral in the old section of Panama City with the country’s priests and nuns. Later he’ll preside over the final vigil before World Youth Day’s culminating Mass on Sunday.

On Friday, Francis brought World Youth Day to Panama’s juvenile delinquents, celebrating an emotional penitential liturgy inside the country’s main youth prison since the inmates couldn’t participate in the Catholic Church’s big festival of faith outside.

Fulfilling his belief that no one should be separated from God’s mercy, Francis also heard the confessions of five inmates at the Las Garzas de Pacora detention center. At least one of them wept uncontrollably afterward.

“There are no words to describe the freedom I feel in this moment,” one of the inmates, Luis Oscar Martinez, told the pope at the start of the service inside the barbed wire-ringed facility outside Panama City.

It was an emotional highlight of Francis’ four-day trip to Panama and a hands-on demonstration of his belief that prisoners deserve the same dignity as everyone else — as well as hope. 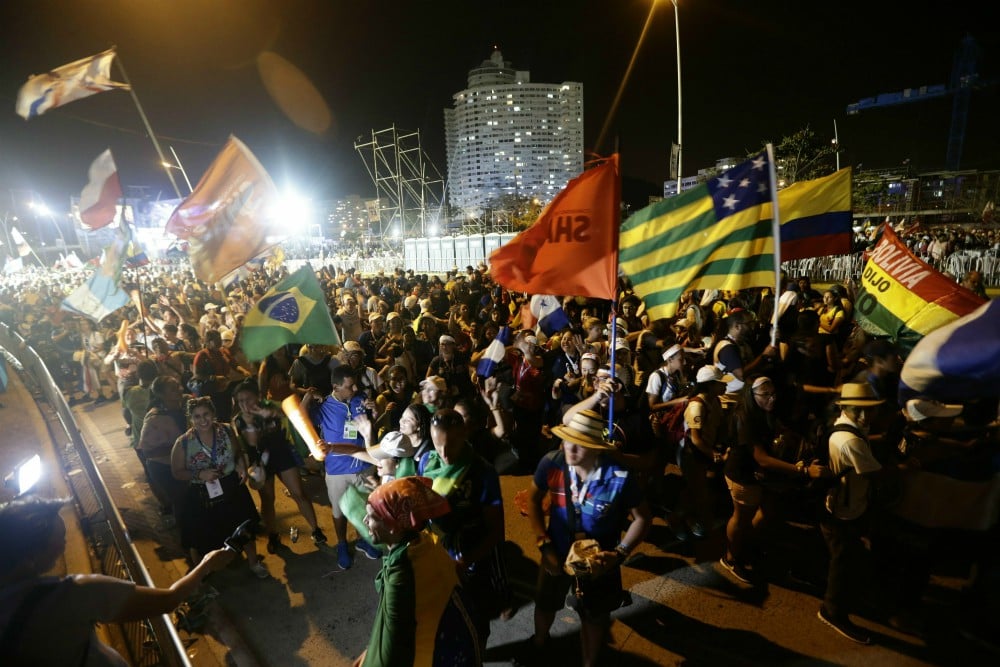 In his homily, Francis lamented that society tends to label people good and bad, the righteous and the sinners, when it should instead spend its time creating opportunities for them to change.

“This attitude spoils everything, because it erects an invisible wall that makes people think that, if we marginalize, separate and isolate others, all our problems will magically be solved,” he said.

Francis has made a tradition of visiting prisoners during his foreign visits and has long made prison ministry part of his vocation to minister to the most marginal in society. Just last year, Francis changed church teaching on the death penalty, saying it was inadmissible in all cases.

The change was in keeping with his belief that prisoners can always change and deserve chances for rehabilitation.

In a sign of that need for inclusion, the Las Garzas inmates wore the same World Youth Day white T-shirts that tens of thousands of pilgrims are sporting around Panama City.

“A society is fruitful when it is able to generate processes of inclusion and integration, of caring and trying to create opportunities and alternatives that can offer new possibilities to the young, to build a future through community, education and employment,” Francis said.

Las Garzas houses more than 150 inmates, some of whom are serving time for murder. The facility, considered a model, opened a year after five minors died in a fire at another prison in Panama City in 2011. Nine people including administrators and police were convicted of homicide or negligence in what was the worst tragedy for the country’s youth prison system.

At the start of the service, Martinez told Francis of his remorse in becoming estranged from part of his family after he committed an unspecified crime.

“I caused a profound pain in a dear friend and in myself,” Martinez, 21, told the pope. He said he wanted to become a refrigeration mechanic when he got out.

“I hope to give this joy to my mother and be in communion with the part of my family that I lost.”