NAIROBI, Kenya (RNS) — An emotional debate over whether Muslim students may wear hijab in Christian schools took a new turn last week (Jan. 24) when the Kenyan Supreme Court reversed a lower-court ruling that had allowed female students to wear Muslim headscarves to school.

The ruling comes amid a heightened push by Muslim leaders and civic groups for acceptance of head coverings in church-owned schools. Christian educators have been resisting the move, insisting that dress codes and uniforms — customarily pleated skirts or plaid dresses for girls with sweater vests — not only provide discipline and equality but are also part of church and school traditions.

“It is the best when the schools and (church) sponsors determine the dress code for students,” the Rev. Henry Ndune, education secretary of the Mombasa Roman Catholic Archdiocese, told Religion News Service.

“When (Muslim) children are being asked to dress according to schools’ dress code, it’s not discrimination. It’s part of holistic education and they are learning how to be tolerant of other people’s ethos,” he said.

Muslim leaders and civic groups counter that the enforcement of uniforms without hijab constitutes a denial of children’s right to worship.

Churches own or sponsor many of the schools in this predominantly Christian country and admit children from all religious backgrounds. Schools run by Muslims, who make up about 10 percent of the population, are concentrated on the coast and in northeastern Kenya.

If Muslims attend Christian schools, said Ndune, “I think Muslims should also follow our ethos when they come to our schools. It is about respecting the other people’s cultures. We are not trying to convert or change them.” 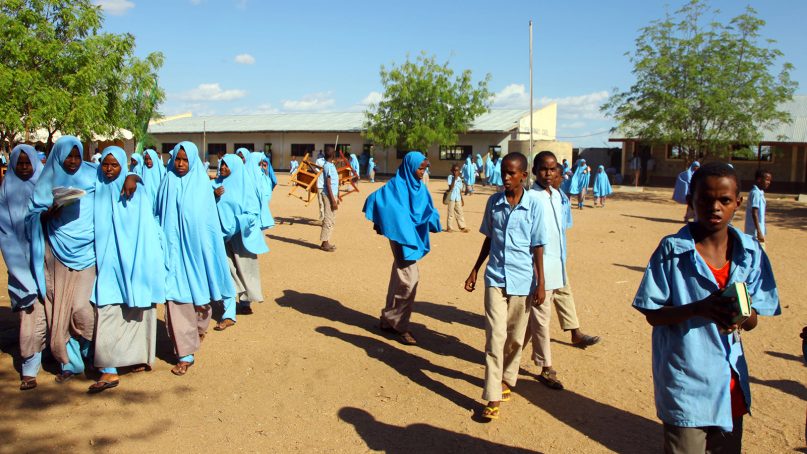 Muslim schoolgirls wear hijab in Garissa, Kenya, in 2015. The Kenyan Supreme Court ruled that private schools can enforce their own dress codes, including the ban of hijab at Christian schools. RNS photo by Fredrick Nzwili

The debate has been going on since 2014, when Muslim girls in St. Paul’s Kiwanjani Day and Mixed Secondary School in Isiolo, a city in central Kenya, appeared at school in headscarves and white trousers at the encouragement of local officials. When the school enforced its dress code, some students threatened teachers and broke windows in protest. After the county ministry of education backed Muslim families over the school board and the parent-teacher association, the Methodist Church of Kenya, a school sponsor, filed a court petition.

In 2016, Kenya’s Appellate Court ruled that disallowing headscarves was unlawful, saying that forcing students to abandon a practice “genuinely held as a manifestation of their religious conviction” was unconstitutional.

Now the Supreme Court’s ruling has again given the Christian schools a free hand to determine dress codes.

Sheikh Ali Juma, chair of the Supreme Council of Kenya Muslims in Narok County, in western Kenya, said the matter could easily have been solved through interfaith dialogue, without having to go through the courts.

“Asking the girls to remove the hijab is equivalent to asking the Catholic nuns to remove their veils,” said Juma. Since most of the girls have been wearing hijab since they were little, he said, “they will feel naked.”

“We need to sit, discuss and agree as the faiths,” said Juma. “As Muslims, we still need these schools.”

But the strong feelings generated by the debate have only served to drive the two faiths apart. One Mombasa priest said some members of his school’s board regard the hijab issue as “a ploy by a few Muslim extremists wishing to drive a wedge between Muslims and Christians.”

Some Muslims said they would defy the latest ruling. “We will continue to have our children attend the schools with the hijab,” said Aden Duale, a Muslim legislator from coastal Garissa County.

Wearing hijab to school has been a source of controversy the world over. In France, students are not permitted to cover themselves until they reach university. Even some majority-Muslim countries such as Tunisia and Turkey have banned hijab in school. (Several countries in Europe and Africa have banned or severely restricted women of any age from wearing full face-covering attire such as the niqab and burkas.)

Meanwhile, more groups in Kenya are expected to demand that their children be allowed to wear religious clothing in class.

In mid-January, a Rastafarian went to court after his daughter was kicked out of Olympic High School in Nairobi for wearing dreadlocks. The Ministry of Education acted quickly to readmit her.