VATICAN CITY (RNS) — Pope Francis on Thursday (Feb. 21) opened a highly anticipated four-day meeting on his church’s ongoing sex abuse crisis by calling on the assembled bishops and other Catholic leaders to “hear the cry of the little ones who plead for justice” and be “concrete.”

“The holy People of God look to us, and expect from us not simple and predictable condemnations, but concrete and effective measures to be undertaken. We need to be concrete,” Francis said.

But as the day wore on and the nearly 200 clerics debated ways to respond to the crisis, it became less clear which “concrete” responses can be agreed upon by a global church rattled by multiple scandals, or whether they will satisfy abuse victims.

Francis opened the conference the featured episcopal presidents of the more than 150 nations by distributing 21 “reflection points” for consideration by church leaders. The recommendations included preparing a handbook for local churches to follow in abuse cases, establishing protocols for handling accusations against bishops and raising the minimum age for marriage to 16. 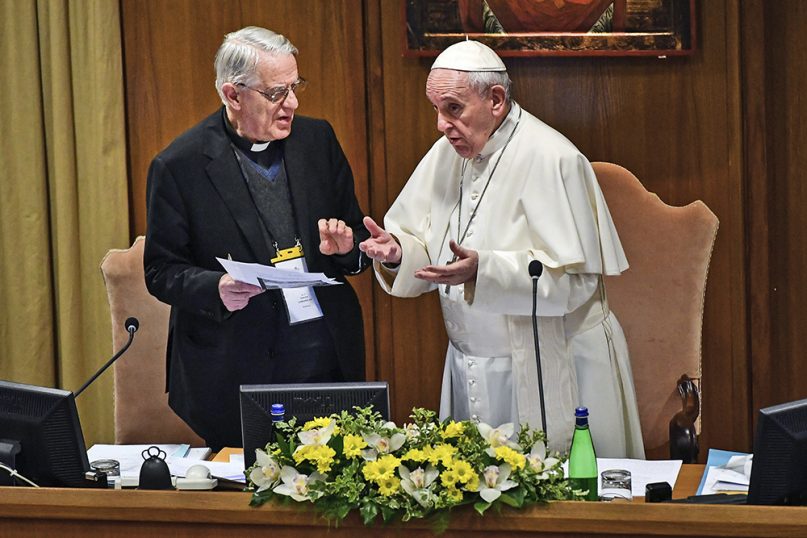 Pope Francis speaks with the Rev. Federico Lombardi, left, the former Vatican spokesman who is moderating the sex abuse prevention summit at the Vatican, at the opening of the summit on Feb. 21, 2019. The gathering of church leaders from around the globe is taking place amid intense scrutiny of the Catholic Church’s record after new allegations of abuse and cover-up last year sparked a credibility crisis for the hierarchy. (Vincenzo Pinto/Pool Photo via AP)

At a news conference after the session, the Rev. Federico Lombardi, former director of the Holy See press office, described the list as “starting points” for conversation among bishops. But Archbishop Mark Coleridge of Brisbane, Australia, speaking after Lombardi, made clear that the bishops’ various perspectives on abuse were as different as the countries they represented.

“What was immediately evident was the challenge of dealing with the very different cultural contexts of this meeting,” Coleridge said, referring to the discussion in the breakout meetings that put bishops from all over the globe together in groups of 20.

He said bishops from Africa and Asia asked why the conference was focusing narrowly on sexual abuse, instead of other kinds of abuse, such as child labor and child soldiers.

“(It) raised the question of how challenging it is to be a church that is both radically local and genuinely universal,” said Coleridge.

With the Vatican buzzing about the recent publication of a book alleging that a junta of gay priests carried outsized influence in Rome, one journalist asked why the pope’s “reflections” did not mention homosexuality. Charles Scicluna, the archbishop of Malta, quickly dismissed any uniform correlation between sex abuse and same-sex attraction.

At a protest outside St. Peter’s Square, Peter Isely, the head of Ending Clergy Abuse, mocked the pope’s recommendations. “‘We’re going to put together a handbook, let’s talk about that,’” Isely said. 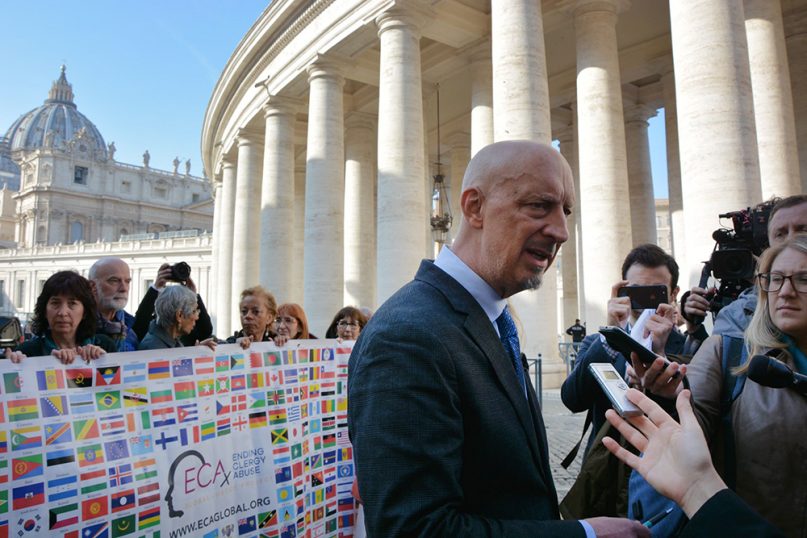 He also expressed frustration with the idea that abuse should be handled differently in different countries, arguing that Catholic leaders already have a precedent for maintaining a single teaching in various cultures — namely, the prohibition of abortion.

“If you’re in a country and a culture in which abortion is OK, do you then say, ‘Well, we’re not going to have this law in the church about abortion until that country or culture gets it. Then we’ll have it?’” Isely told Religion News Service.

Isely’s group was one of several working to make their voices heard around Vatican City on Thursday. Besides Ending Clergy Abuse’s vigil for victims of abuse, the Survivors Network of those Abused by Priests held its own news conference on the need to hear survivors’ stories.

By and large, church leaders made efforts to mention the voices of victims during prayers or speeches. Testimonies from survivors were also incorporated into the meeting and preceded the pope’s morning remarks.

“We cannot continue with this crime to cover the scourge of sexual abuse in the church,” one unnamed victim said. “I hope that the Lord and Mary will enlighten you that, once and for all, we work with justice to remove this cancer from the church, because it is destroying it. And this is what the devil wants.”

The rest of the day was filled with working groups, news conferences and a trio of presentations delivered by high-ranking clerics focused on the day’s theme of “responsibility.” (Tomorrow’s theme will be “accountability,” followed by “transparency.”) Representatives from the Catholic clergy sex abuse summit speak to media at the Vatican on Feb. 21, 2019. RNS photo by Jack Jenkins

Cardinal Luis Tagle, archbishop of Manila, in the Philippines, led the first talk, which focused on theology. He framed his address around the biblical story of Doubting Thomas, in which the disciple is convinced of Jesus’ resurrection only after touching his wounds.

Tagle used the story as a metaphor to call for clerics to “draw close” to the wounds of those hurt by the church.

“The abuse of minors by ordained ministers has inflicted wounds not only on the victims, but also on their families, the clergy, the church, the wider society, the perpetrators themselves and the bishops,” he said. “It is also true, we humbly and sorrowfully admit, that wounds have been inflicted by us, bishops, on victims and, in fact, the entire body of Christ.”

Tagle, who often choked back tears as he spoke, is widely seen as a liberal churchman sometimes referred to as the “Asian Francis.” He suggested that clerics ask for forgiveness, but not forgiveness that would “just let it all go, excuse the abuse, just move on.”

“We do not deserve that forgiveness in the order of justice but can only receive it when it is bestowed as gift and grace in the process of healing,” he said.

Tagle’s approach offered a sharp contrast to the far more reserved and practical tone of Scicluna, a leading voice on the subject of abuse. He was elevated by Pope Francis last year to be adjunct secretary of the Congregation for the Doctrine of the Faith, the Vatican body that deals with sexual abuse by priests. His team’s 2,300-page report on abuse in Chile prompted Pope Francis to apologize for defending a bishop accused of covering up abuse by a pedophile priest in the country. 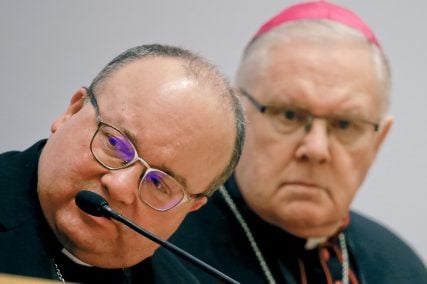 Speaking after Tagle on Thursday, Scicluna walked through what he called “instances of best practice” for handling abuse allegations, including measures already used by dioceses in the United States, such as making it easier for victims to report abuse, forming local advisory boards and collaborating with local law enforcement. He made clear that local civil or domestic laws on abuse should be obeyed.

But he also said Catholics around the globe need to be assured that the church wants to hear about instances of abuse. “The faith community under our care should know that we mean business,” he said. “We will protect them at all cost. We will lay down our lives for the flocks entrusted to us.”

If the talk at the conference is familiar to the American bishops, the stakes are nonetheless high for their delegation. The Vatican gathering was cited as part of the reason why Vatican officials made a last-minute request of the U.S. Conference of Catholic Bishops in November to hold off on votes that would have potentially implemented new systems for holding bishops accountable who either protect abusive priests or commit abuse themselves.

The head of the USCCB, Cardinal Daniel DiNardo, has also faced criticism for being too slow to take action on abusive priests. In November, police searched his archdiocesan offices as part of an investigation into alleged child sex abuse by a local priest.

Just as the bishops were gathering in Rome over the weekend, Francis announced the defrocking of former Cardinal Theodore McCarrick in response to allegations that included sexual assault of seminarians and solicitation of sex while hearing confession.

Cardinal Rubén Salazar Gómez, archbishop of Bogotá, Colombia, closed the day with a talk on “dealing with conflicts and tensions and acting decisively.” He walked through general ways that bishops can respond to allegations of abuse and suggested that a “code of conduct” for bishops on how to respond to abuse allegations is forthcoming.

Such a code, he said, “will clarify and demand of us the conduct that is proper to the bishop,” but “will be a guide for the Church and society as well, allowing everyone to properly assess the bishop’s actions in specific cases and giving us all the confidence that we are doing well.”