VATICAN CITY (RNS) — On a day packed with emotion and unusually direct criticism of the Catholic Church hierarchy, victims of church abuse responded sharply to an admission by a German cardinal that the church has destroyed files documenting sexual abuse abuse by its priests.

“Files that could have documented the terrible deeds and named those responsible were destroyed, or not even created,” Cardinal Reinhard Marx, archbishop of Munich and Freising, told the more than 190 church leaders gathered at the Vatican’s synod on clergy abuse.

The vague disclosure on the third day of the Vatican’s summit on sex abuse, the theme of which was transparency, infuriated advocates for abuse victims, who marched through the streets of Rome shortly after Marx’s talk demanding the church adopt a firm zero tolerance policy toward abuse and abusers.

Demonstrators waved signs reading “Secular justice for all!” as they processed, chanting “No more abuse!” and “Justice now!” 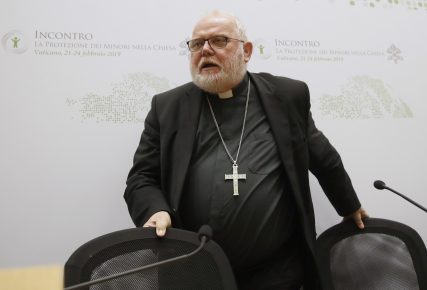 The march, which had been planned before Marx’s speech, concluded with a rally at Castel Sant’Angelo, a former papal fortress, now a museum, where more than one survivor responded to Marx’s admission while speaking to press.

“We were told today that archives have been destroyed by the Vatican. But the evidence cannot be destroyed,” said Polish abuse survivor Ania Frankowska, gesturing to her fellow abuse survivors.

“The Vatican may destroy documents, may restrict our access for justice, but … we are the evidence of the abuse.”

Marx later walked the line back slightly in speaking to journalists, explaining he was not referring to the entire church per se, but rather to a recently revealed study of German dioceses that did not name specific leaders or institutions but claimed church documents regarding allegations of sexual abuse were destroyed.

Still, he did not rule out that the practice could occur elsewhere.

“I have information concerning Germany, but I assume (Germany) is not an isolated case, ” he said, according to a Vatican translator.

Challenges to the Vatican’s status quo were the order of the day inside the assembly hall as well, including from Marx. He called for the publication of statistics about abuse cases and argued that a transparent process for investigating abusers would only help the church. Ania Frankowska speaks at a rally for sexual abuse survivors at Castel Sant’Angelo in Rome, just outside the Vatican. Image RNS photo by Jack Jenkins

Marx also touched on pontifical secrecy, a code of confidentiality that pervades the church, saying that he sees “no such reason” why it should apply to the criminal prosecution of clerics who abuse children.

“It is necessary to redefine confidentiality and secrecy, and to distinguish them from data protection,” he said.

Another strongly worded address came from Sister Veronica Openibo, a Nigerian nun and leader of the Society of the Holy Child Jesus. She began the Saturday session with a speech on “openness” that derided what she called the church’s “mediocrity, hypocrisy and complacency” that led to the abuse crisis.

She cited Pope Francis’ own evolution on sex abuse in the church in Chile. Last year Francis initially defended a bishop accused of shielding a pedophile priest before changing course eventually and accepting the resignations of three Chilean bishops. The nun pointed to the turnabout as an illustration of positive transformation regarding abuse.

“I admire you, Brother Francis, for taking time as a true Jesuit, to discern and be humble enough to change your mind, to apologize and take action,” Openibo said. “This is an example for all of us.”

Openibo also addressed an ongoing debate at the summit about how pertinent abuse reform is to clerics in non-Western nations. Like others, she said, she has heard church leaders in Africa and Asia dismiss sex abuse as only a problem elsewhere. She noted that her experience teaching about sexuality in Nigeria for several years implied otherwise and said reform was no less pressing because those nations face other problems.

“The fact that there are huge issues of poverty, illness, war and violence in some countries in the Global South does not mean that the area of sexual abuse should be downplayed or ignored,” she said.

Speaking at a news conference later in the day, Openibo expressed hope that the summit would produce change: “Thank God, I’m just trying to say to you, that something happened in that hall.” Sister Veronica Openibo, a Nigerian nun and leader of the Society of the Holy Child Jesus, speaks to reporters at the Vatican. RNS photo by Jack Jenkins

Perhaps the most uncompromising statements came in the final presentation of the day, by Valentina Alazraki, a journalist who has covered the Vatican for Mexican outlet Noticieros Televisa since 1974. Her presence was a tangible reminder of the role journalists have played in uncovering the Catholic sex abuse scandal, dating back at least to The Boston Globe’s 2002 “Spotlight” report detailing allegations of widespread cover-up of abuse in that city.

Alazraki’s speech, which she said emerged from her experiences as a journalist and as a mother, included a series of frank challenges to the bishops.

“Ask yourselves: Are you enemies, as determined as we are, of those who commit abuse or who cover them up?” Alazraki asked. “We have decided which side to be on. Have you done so truly, or in word alone?”

Alazraki dismissed any claim that the media can be blamed for the abuse scandal. She implored church officials to provide information about abuse first “in a proactive and not reactive way, as normally happens,” adding, “Report things when you know them.”

Alazraki pushed back on leaders who respond to scandals with silence or “no comment,” saying, “Then we will seek answers by asking others, and thus it will be third parties informing people in the way they wish to do so.”

She also said in no uncertain terms that failure to act on the sex abuse will only increase scrutiny from the media.

“If you do not decide in a radical way to be on the side of the children, mothers, families, civil society, you are right to be afraid of us, because we journalists, who seek the common good, will be your worst enemies,” she said.

She closed by inviting bishops when they return home to seek out journalists instead of avoiding them.

“(I hope) that you will return to your dioceses thinking that we are not vicious wolves, but, on the contrary, that we can join our forces against the real wolves,” Alazraki said.

As she finished, journalists watching a livestream of her remarks in the Vatican press office burst into applause — twice. A survivor of sex abuse, who wished to remain unidentified, background right, plays violin Feb. 23, 2019, after he delivered his testimony during a penitential liturgy attended by Pope Francis at the Vatican. (Vincenzo Pinto/Pool Photo Via AP)

The theme of humbling the powerful extended into the evening’s worship service, which was framed as a “penitential liturgy.” Archbishop Philip Naameh of Tamale, Ghana, delivered the homily, in which he invoked the parable of the prodigal son, saying bishops often “forget to apply this Scripture to ourselves, to see ourselves as we are: namely, as prodigal sons.”

He described the summit as “only one step of many” and suggested there is still much left to do — and much to ask forgiveness for.

“Do we do justice to what is entrusted to us?” he said. “We will not be able to answer this question with a sincere yes. Beyond all doubts, too often we have kept quiet, looked the other way, avoided conflicts.”

To drive the point home, the service also included the unscheduled testimony of an abuse survivor.

The survivor, standing in a sanctuary filled with a host of bishops and the pope himself, described the harrowing toll abuse can take on a person, leaving victims with “no day without flashbacks.”

The unnamed survivor then walked over, picked up a violin and played a haunting, sorrowful tune before the assembly. 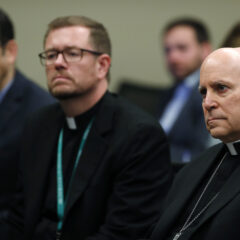