(RNS) — Will Willimon, a prominent theologian and a retired bishop of the United Methodist Church’s North Alabama Conference, has some choice words for a denomination in disarray over its views on sexuality.

Willimon, like other bishops, couldn’t vote on any of the plans presented this week at the special denominational session in St. Louis — one that would continue to restrict church leaders from ordaining or marrying LGBT people, and another that would allow local congregations to make their own decisions. Church rules don’t give bishops a voice or a vote. The session’s 864 delegates are made up of clergy and lay people from around the world.

But as a lifelong Methodist, he said, he saw an unmistakable change in the attitudes of the delegates at the special session in St. Louis. People on either side of the issue talked of breaking away from the 12 million-member global denomination. Willimon, who now teaches at Duke Divinity School in Durham, N.C., left St. Louis on Tuesday (Feb. 26) before the final vote.

He talked to Religion News Service by cellphone from St. Louis. This interview has been edited for length and clarity.

What are you seeing and hearing from the delegates?

It occurred to me there are people in the auditorium who don’t care what plan passes or how it passes. They’re withdrawing. Once you’ve made that decision, what difference does it make what plan you’ve got? Someone was saying, “Unless the Traditional Plan passes exactly as it is, unamended, we’re leaving.” That’s kind of like announcing, “We’re leaving.” Imagine having a meeting in a local church where people say “Hey, before we have the discussion and all, if this vote in session doesn’t go my way, I’m leaving.” 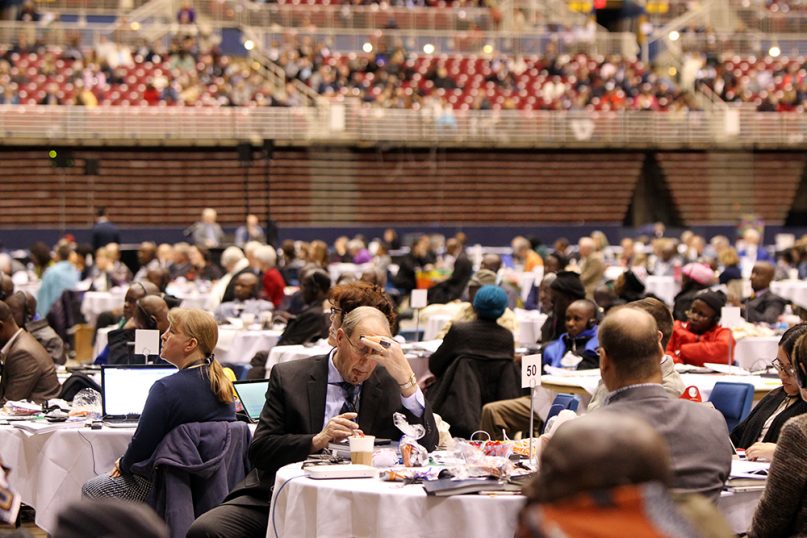 Traditionalists organized the Wesleyan Covenant Association and made clear their intention to separate from the denomination if the rules regarding LGBTQ people are changed. Are progressives also organized?

The traditionalists did a bang-up job of political organizing and counting the votes. The progressives were all busy talking about unity and community and listening and loving. The conservatives were on the floor getting the votes.

Do you expect some bishops to leave, too?

I’d be surprised, but I don’t know. If we’ve shown one thing, it’s that what bishops do — or don’t do — is almost irrelevant. The bishops labored for two years and came up with these three plans and backed the One Church Plan (which would allow local congregations to decide about LGBTQ ordination and marriage) and pushed that. But the General Conference seems united: We don’t trust bishops. I tried to advocate for the One Church Plan and found out that many progressives felt it didn’t go far enough in providing affirmation and protection for LGBTQ people. On the other hand, traditionalists said, “This is a power play by the bishops to throw this on us even though we’ve demonstrated through many votes we don’t want it.”

Is division necessarily a bad thing?

We need to remind ourselves that what’s passed for church unity for the last 40 years in the Methodist Church is a kind of bureaucratic, rule-driven, top-down, corporate-America type unity. If that unity is disrupted, that puts us back to where we’ve always been: That’s a gathering by Christ of all kinds of people that make up the church. I say to my seminarians, “Remember, the General Conference as it is now, the Book of Discipline as it is now and our notions of unity and connection — that’s only 40, 50 years old.” When we started the Book of Discipline it grew by a third with additional rules and regulations. If that’s being dismantled, I don’t know that that’s a bad thing. Some United Methodist delegates gather together to pray before a key vote on church policies about homosexuality on Feb. 26, 2019, during the special session of the UMC General Conference in St. Louis, Mo. RNS photo by Kit Doyle

Would a split take place over time, rather than in one fell swoop?

That’s my guess. But I’ve been wrong before. If the Traditional Plan passes, will it be constitutional? I don’t think it will be.  There are a number of problems with it, particularly in its punitive parts. However, I don’t know that it will make a lot of difference. There are people, left and right, progressive and conservative, who just say, “This is it. We’ve waited. We’ve watched. We’ve tried. And now we can’t stay.”

To me, that’s the story, more than which plan passes.

That’s kind of new. We spent time yesterday openly discussing, “Now, how much do we have to pay to have to leave? Is a third of a property assessment OK?” It was just weird hearing us talk that way. That’s not the way we’ve talked previously.  If you talk that way, it means the debate is almost moot. This may be a bad analogy, but as a pastor, when a couple comes to me and says, “We’re talking about getting a divorce. We’d like to hear your views on our marriage,” I say, “If you’ve gotten this far, you’re going to divorce. What do you want from me?” I kind of feel that way here.

What will the 93 affiliated colleges and universities do?

I think there are going to be stresses — not only because we could violate many colleges’ statements of inclusion and affirmation by our actions here. Just as important for me, I think, is that we’re turning away everyone under 40. The average Methodist is 61 years old. What we ought to be talking about is “What in the world can we do to reach the generations we’ve lost?” Our colleges are going to say, “We still feel called to be connected to and in ministry with 19-year-olds. You appear to have no interest in that. We’re going to have to evaluate where we are with you.”

If we have congregations leaving, we’re going to have huge financial stresses and they won’t be felt in clergy salaries. They’ll be felt by the institutions and the money we give them, which has been shrinking rapidly. It will shrink even further, thus aggravating that situation.

Where do you find hope?

The hope is that Jesus Christ is Lord. There is a God, and our God is a redemptive God. I can’t decide if the Lord is saying now, “You created the structure and polity of the United Methodist Church. I didn’t. You wrote the Book of Discipline. I didn’t. If that’s being dismantled, that’s OK.”

I teach at Duke Divinity School and God is still calling some great people to lead the Methodist Church. My message to students is, “If you ever wonder why God calls people like you in the ministry, look at the General Conference. God has called you to save us, redeem us, lead us. Now step up and lead.”

I’m hoping that is our hope.