ST. LOUIS (RNS) — Delegates to a special session of the United Methodist Church decided Sunday (Feb. 24) to start deliberations over the denomination’s future by talking about money.

Then they will talk about sex.

Those delegates ranked a discussion of the church’s pension plan as their top priority, followed by a plan that would strengthen a ban on LGBTQ clergy and same-sex marriage.

Two-thirds (nearly 64 percent) voted for a discussion of the implications of a church split on pensions as their top priority.

Nearly 56 percent of the 864 delegates to the General Conference’s special session on sexuality agreed that the Traditional Plan — one of three presented by a specially appointed commission – was a high priority for the global denomination’s decision-making body. 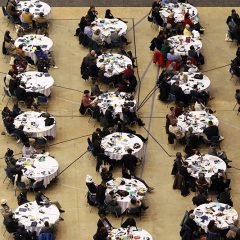 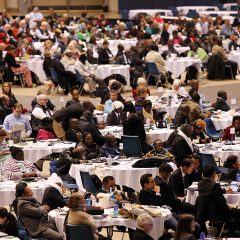 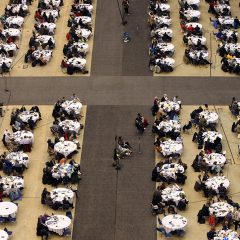 Meantime, the One Church Plan, recommended by the church’s Council of Bishops, received support from about half of the delegates.

These results determined the order in which plans and petitions will be considered by the General Conference.

While Sunday’s vote results don’t necessarily mean the Traditional Plan has the most support of the plans that will be considered this week in St. Louis, it still felt that way to many of its supporters and opponents.

“We have a long way to go, but we’re encouraged,” said the Rev. Keith Boyette, president of the Wesleyan Covenant Association, an organized conservative group that supports the ban on LGBT clergy. Boyette has said if the One Church Plan or another called the Simple Plan passes, he would recommend the group form a new denomination.

Sunday’s vote is just the first step toward adopting any plan, he said. Delegates will have a chance to amend the plan before deciding whether to approve it.

But, he said, he believes the Traditional Plan now has the advantage because it will be taken up and amended first, and the time spent on it won’t be available to spend on other plans. And he feels that ranking will translate into votes, as its supporters were urged going into the session to rank the Traditional Plan a high priority and all others low.

Boyette also said he wasn’t surprised pensions ranked first. Delegates need to address what would happen to the pensions of clergy who leave the denomination if they disagree with the decisions made this week by the General Conference, he said.

The special session opened Sunday morning with a sermon from Bishop Ken Carter, president of the Council of Bishops, who said delegates should focus on what unites them, not what divides them.

Bishop Christian Alsted, who presided over the morning session of the General Conference, reminded delegates that “we are not gathered here in St. Louis to discuss and to decide on an issue or on a question. We are speaking about people in the church.” Allison Vellas, of Ink Factory, creates a live illustration of the special session of the United Methodist Church General Conference in St. Louis on Feb. 24, 2019. RNS photo by Kit Doyle

The special session of the General Conference hopes to resolve a decades-long debate over sexuality in the nation’s second-largest Protestant denomination.

Currently, the denomination’s rulebook, the Book of Discipline, states that “the practice of homosexuality is incompatible with Christian teaching” and that “self-avowed practicing homosexuals” cannot be ordained as ministers, appointed to serve or married in the church.

Locked in a stalemate over attempts to change those rules, delegates at the 2016 General Conference voted to defer all decisions on related legislation to a specially appointed Commission on a Way Forward. That led to this week’s special session to receive and act on a report including three plans proposed by the commission. 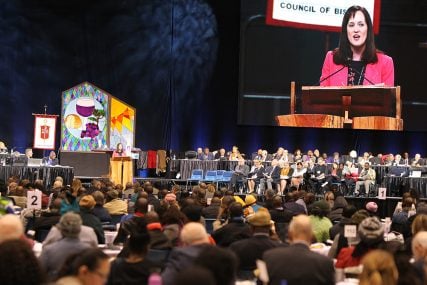 Jessica LaGrone, a member of the Commission on a Way Forward, presents the Traditional Plan during the special session of the United Methodist Church General Conference in St. Louis on Feb. 24, 2019. RNS photo by Kit Doyle

On Sunday morning, commission members explained their work and described the three plans for moving forward.

Jessica LaGrone, an elder from Kentucky, said the Traditional Plan, which strengthens the enforcement of current rules, “values consistency in practice.” She compared it to the denomination’s stances on the ordination of women or infant baptism.

Jasmine Rose Smothers, an elder from Georgia, described the One Church Plan supported by the Council of Bishops. That plan would allow individual churches and regional annual conferences to decide whether to ordain and marry LGBTQ members.

With 49 percent of delegates ranking the plan a high priority, it will be considered fifth.

“The One Church Plan does not see unity as uniformity,” Smothers said. 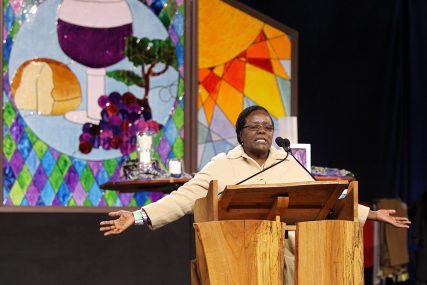 Mazvita Machinga, a member of the Commission on a Way Forward, presents the Connectional Conference Plan during the special session of the United Methodist Church General Conference in St. Louis on Feb. 24, 2019. RNS photo by Kit Doyle

Mazvita Machinga, a laywoman from Zimbabwe, presented the Connectional Conference Plan, which would reorganize United Methodist churches by conferences based on theological beliefs, rather than by geographical location.

“Yes, it is the most complex of all the plans,” Machinga said. She added that complexity is needed for United Methodists to remain one church.

Other plans approved for consideration that were not part of the report by the Commission on a Way Forward include: the Simple Plan, which would remove all language about “the practice of homosexuality” from the Book of Discipline, and the modified Traditional Plan, which was referred to a committee.

After the presentation of the three plans in the report, commission member Brian Adkins, an elder from California who identified himself as an openly gay pastor, told LGBTQ United Methodists from the stage, “No matter what happens in this room or anywhere else, there is a place for you at God’s table, and no one can take it from you.”

Good morning from St. Louis, where delegates and observers arriving to the special session of the United Methodist Church General Conference early this morning were met with song. #umc #umcgc #gc2019 pic.twitter.com/JuaRILQxMc

Delegates and observers arriving at the special session early Sunday morning were met with that same message.

About two dozen members of the Queer Clergy Caucus sang “Jesus Loves Me” and other familiar songs as people lined up to enter the Dome at America’s Center, where the meeting will run through Tuesday. Some wore rainbow-colored stoles around their necks. Others held signs with messages introducing themselves: “I am a trans pastor” and “I am a lesbian sibling in Christ.”

RELATED: What will happen at the special session? Here’s what United Methodists predict

The clergy and their supporters wanted to greet delegates at the start of the conference in a “celebratory way” and make sure LGBTQ United Methodists were part of the conversation inside, Adkinson said, because “this conference is all about us.”

“The real main point of all of this is to remind people it’s more than an issue. It’s not just theology. Real lives are on the line,” he said. Supporters for the Simple Plan hold banners and sing before the afternoon session at the special session of the United Methodist General Conference in St. Louis on Feb. 24, 2019. Photo by Kathleen Barry/UMNS

After the vote Sunday afternoon, the mood turned somber for advocates of the full inclusion of LGBTQ people in the church.

A number of people left their seats, marching through the building with a rainbow flag, singing and chanting “Love provides, hate divides.” Their action was a “spontaneous cry from the soul,” said Carol Scott, a member of Methodists in New Direction, which supports LGBTQ inclusion.

To Scott, the prioritization vote felt like “55 percent of the body voted to clamp down even harder on children of God.”

Scott and the Rev. Traci C. West, professor of Christian ethics and African-American studies at Drew University Theological School in Madison, N.J., reminded advocates gathered outside the session that this wasn’t the last day of the conference. It wasn’t even the vote to approve any of the plans before conference delegates.

There was singing again as delegates left at the end of the evening, and a word of encouragement from Bishop Karen Oliveto, the first openly lesbian bishop in the United Methodist Church.

“God’s not done with us yet,” Oliveto said.