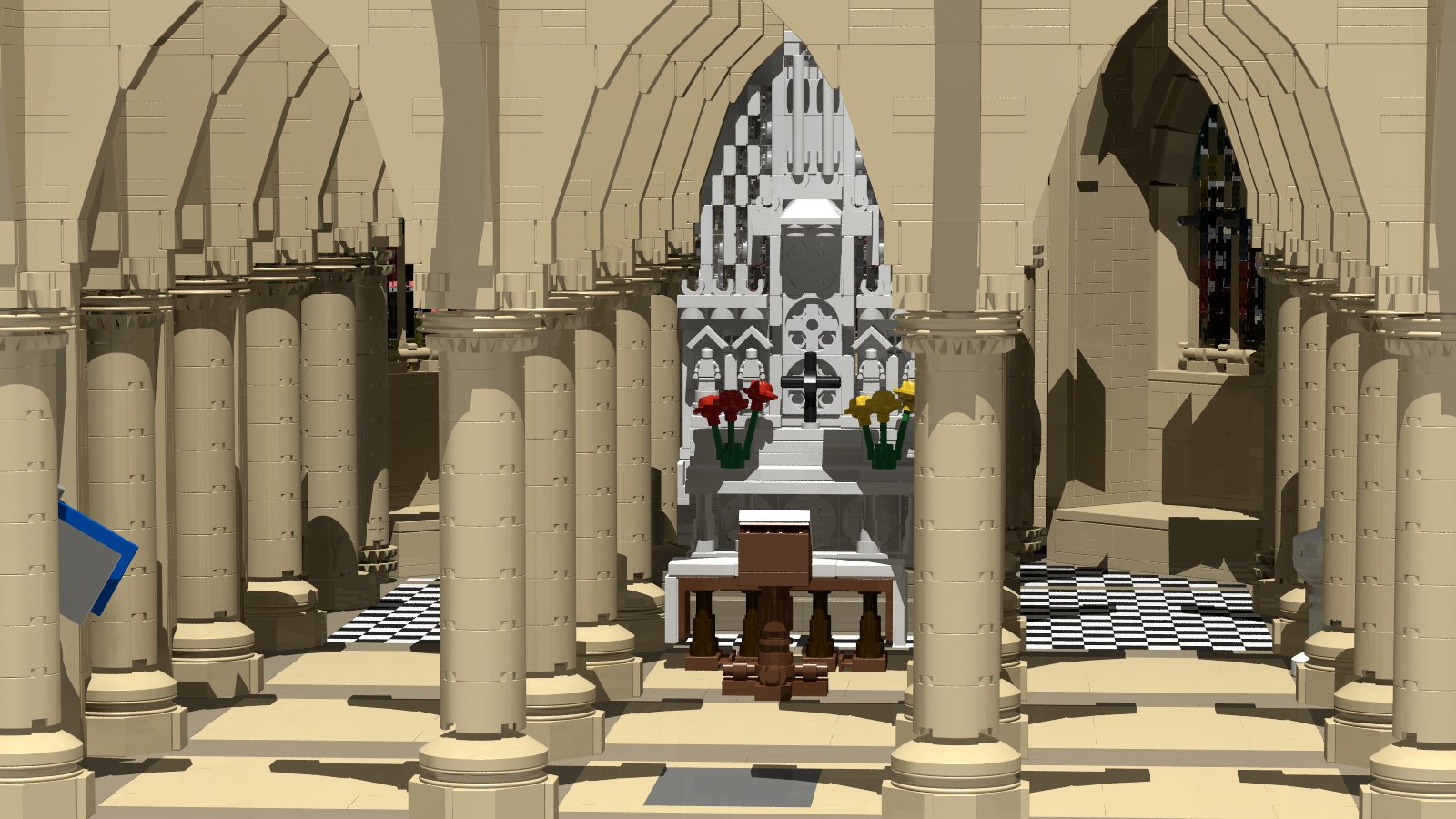 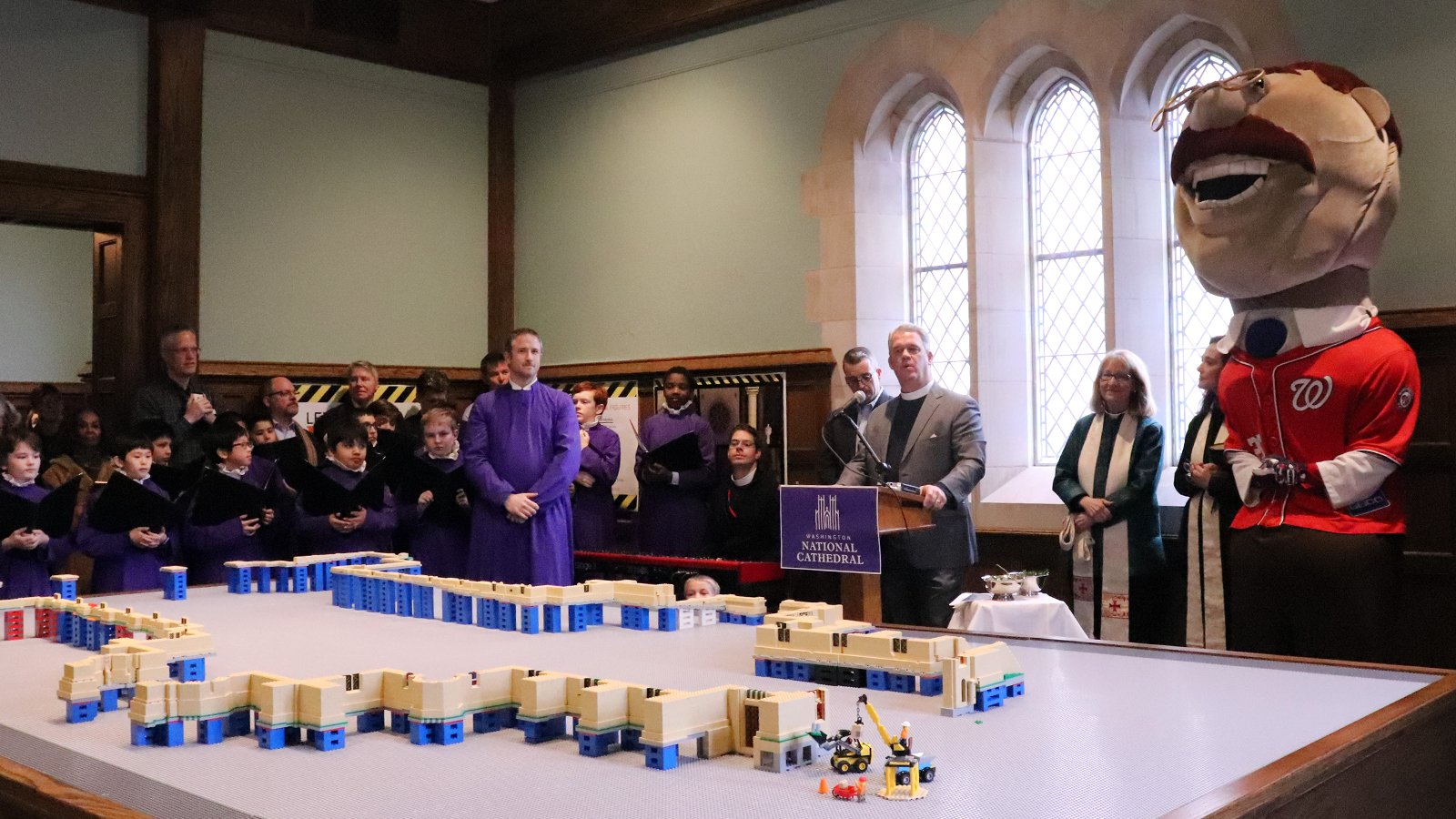 WASHINGTON (RNS) — With boy choristers singing their version of “Everything Is Awesome,” the Washington National Cathedral unveiled the foundation of a Lego replica of the cathedral that will be built as a fundraiser over the next several years.

The “Let There Be Lego!” initiative was inspired by a similar project at Durham Cathedral in England. It aims to help the District of Columbia cathedral raise the $19 million still needed to pay for the $34 million in damages from a 2011 earthquake.

The compact church will be constructed with an estimated 400,000 bricks and will weigh about 1,350 pounds, planners said Friday (Mar. 1). There will be 112 Lego gargoyles, and it will take 9,000 bricks to make the cathedral’s signature “Creation” rose window. While the stone building took 83 years to build, officials predict the model will take between two and three years.

Charles Fulcher, director of the cathedral’s visitor programs, said the project is a new way to welcome the hundreds of thousands of people who visit the Gothic edifice every year.

“This is a way for visitors to be hands-on in the life of the cathedral,” he said.

At the unveiling, Fulcher recalled stories of people who saw the blocks of Indiana limestone outside the real edifice as it took shape.

“They never actually picked up those blocks of limestone and put them on the building," he said.

He envisions visitors purchasing bricks — at $2 apiece, small or large — and placing them in the model before heading into the sanctuary for a guided tour and seeing the real location of the spot they built in miniature. Volunteers will place bricks purchased by people online in the model, located in a room once used for a rare-book library.

The completed Lego cathedral will be 7 feet tall, 13 feet long and 8 feet wide — about the size of a minivan.

Washington Cathedral Dean Randy Hollerith said he hopes that the cathedral, an Episcopal congregation that bills itself as a “house of prayer for all people,” can be a place for fun even as people learn more about it and help to restore it. The project, he said, will fill the cathedral with joy.

“Faith without joy, as far as I’m concerned, is no faith at all," he said. "So we are really excited about this project.” 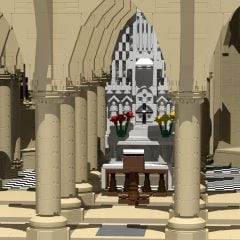 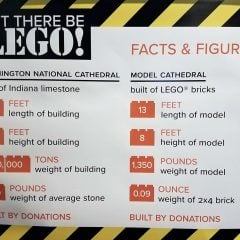 The comparison figures between the Washington National Cathedral and the Lego replica. RNS photo by Adelle M. Banks 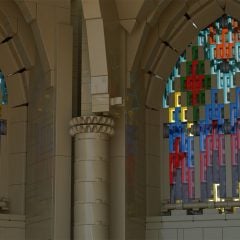 The mini-cornerstone-laying ceremony was an unusual mixture of the holy and the humorous, as Teddy, the mascot of the Washington Nationals baseball team, stood by cathedral clergy, grinning, clapping and evoking memories of President Theodore Roosevelt at the laying of the cornerstone of the real cathedral.

Hollerith and the Rev. Jan Cope, cathedral provost, walked around the foundation of the model — paid for with early donations — and blessed it with holy water using boxwood branches.

The Rev. Dana Corsello, vicar of the cathedral, uttered the blessing for the occasion, asking for divine guidance for each hand that lays each brick from “God the architect, Jesus the carpenter and the Holy Spirit illuminating your majesty from within and without."

“Everything is awesome,” she concluded, voicing the oft-repeated refrain featured in “The LEGO Movie.”

Ed Diment, creative director of Bright Bricks, a United Kingdom-based company that partnered with the cathedral on the project, said the digital process of designing the model was comparable to playing with actual Legos. Volunteers will be guiding visitors with instructions similar to those provided in sets sold in stores.

True to the design of the actual cathedral, Diment said, the model, being built in the room next to a gift shop, will include a tiny version of the model itself.