NAIROBI, Kenya (RNS) — When South African Pastor Alph Lukau claimed to have resurrected a dead man recently, the biblical story of Lazarus may have echoed in the minds of his congregation.

But the action that day (Feb. 24) by the senior pastor and prophet at Alleluia International Ministries in Kramerville, Sandton, in Johannesburg, has stirred a storm after the video showing the alleged resurrection went viral.

Lukau, in the video, is seen standing before a coffin that contains the body of a purportedly dead man in a white suit. Lukau calls the man’s name twice, speaks in tongues and touches his body. The man then sits up inside the casket with his mouth wide open. The congregation breaks into wild celebrations and prayers.

The man — whose name is given as “Elliot” — had allegedly been dead since Feb. 22 and his body had been kept at a mortuary.

“A dead man came to life in this service. I speak the miracle of resurrection,” Lukau later posted on Facebook on Feb. 24.

As the video spread, a wave of condemnation followed, with Christians across Africa expressing shock. 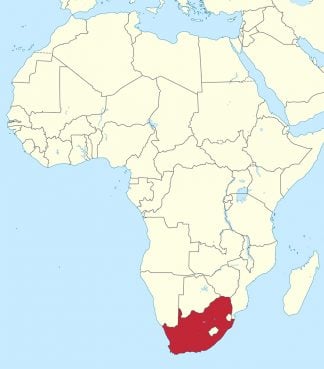 South Africa, red, is at the southern tip of Africa. Map courtesy of Creative Commons

“I condemn the act. Any pastor who claims to collect a body from a mortuary and give it life is dramatizing a lie,” the Rev. Martin Wesonga, principal of Bishop Hannington Institute, an Anglican theological college in Mombasa, told Religion News Service.

The Rev. Jan Cloete, moderator of South Africa’s Calvyn Protestant Church, said the stunt had made the churches a laughingstock of the nation and dealt a serious blow to the call of true discipleship.

“We believe the actions of this so-called man of God may have caused serious damage to those seeking a life-affirming relationship with Jesus,” Cloete said in a statement.

While they had remained in the periphery for many years, Pentecostal or charismatic churches are now influential players in Africa’s Christianity, building hospitals, schools and universities and addressing challenges such as HIV and AIDS, tuberculosis and malaria, along with providing spiritual nourishment.

But some pastors who claim miraculous powers are bringing disrepute to the positive work, according to church leaders.

“I think the pastors are preying on the people’s desperation,” said Wesonga. “There are a lot of problems in Africa, and the people eager to sort them out fall for these tricks without questioning. What the pastors tell them is the final word of God. It is like a cult.”

Recently, Pastor David Owuor of the charismatic Ministry of Repentance and Holiness claimed to have resurrected Rosa Chepochesau, who died in January after a long illness. Before her death, Chepochesau claimed she had died two years before but had been resurrected by Owuor.

Last year, a self-proclaimed prophet was arrested in Ethiopia after he failed to bring to life a dead man whom the family had exhumed at his request. 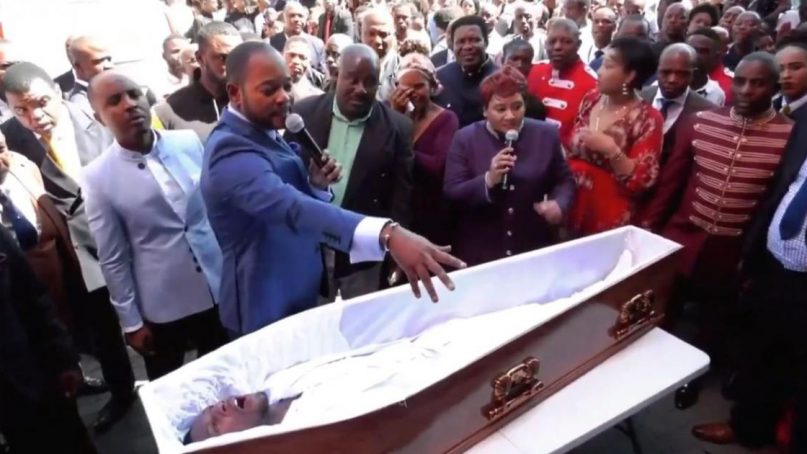 The Rev. Adama Faye, an Evangelical Lutheran church pastor in Senegal, said that while the Bible indicates that miracles are possible when one has faith, he doubted the alleged miracles by some Pentecostal church pastors.

“I think they (some Pentecostal and charismatic church pastors) are manipulating the population for money,” said Faye in a telephone interview.

Meanwhile, Paseka Mboro, a controversial South African charismatic pastor, has promised to file a criminal complaint with police if Lukau does not prove the resurrection miracle.

“If it’s true you resurrected a man, then let’s go to Mandela’s grave to do the same,” he told the South African press.

(Mboro himself recently claimed to have killed Satan and visited heaven, where he claims to have taken selfies.)

Three funeral homes that provided the coffin and other elements of the video say they were tricked into getting involved in the scheme and are threatening to sue Lukau.

One Twitter user claimed that Lukau’s video “just ruined everything for my brother.” The man had planned to get married in a white suit, but now his family has started calling him “Resurrection.” 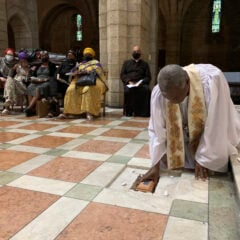 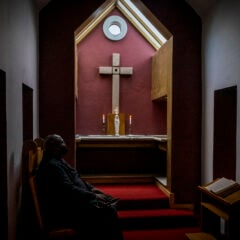