(RNS) — When First Congregational Church of Bellingham built a new sanctuary in the mid-2000s, it wanted to be sure the facility would be used all week long and not just on Sunday.

So along with worship space, the Washington state congregation’s plans included a ground-level space with a separate entrance that could be used by an outside ministry or nonprofit.

Finding the right partner took some time. The building was finished in 2004, and, for more than a decade, the extra space was used as storage.

Then last month, the church dedicated The Ground Floor, a custom-built drop-in center for homeless youth, run in partnership with Northwest Youth Services, a local nonprofit.

“It felt like a hand-in-glove fit, that this was an organization we could work with,” said Sharon A. Benton, pastor of First Congregational.

While many churches engage in mission activities “beyond the walls” of their buildings, others are finding innovative ways to use their facilities to serve others and extend their mission in existing properties.

Some congregations see rental agreements as a way to make use of underutilized spaces or to augment declining church budgets, allowing the worshiping community to stay in a facility it could not otherwise afford. Others have long-standing arrangements to incorporate profit-making and not-for-profit businesses, such as child care centers, into their physical plant.

Other faith communities want to support organizations that fulfill or extend the mission of the church.

First Congregational needed more space for church programs and worship attendance when it built its current sanctuary. It was also concerned about its mission, said Benton.

“The congregation knew it wouldn’t be able to do anything with the basement at that time,” she said. “But it was already having conversations about what it would do for mission in the community.”

At first, the ground floor space was used to store furniture and home goods for a local agency providing assistance to low-income people moving into their first home or apartment. It was an important ministry but wasn’t fulfilling the church’s intent for the building. 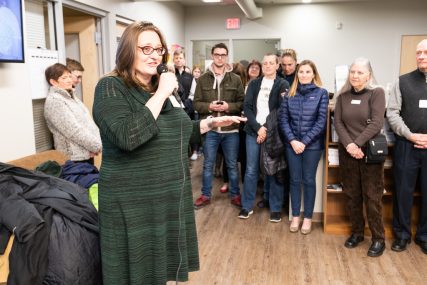 In 2015 the church called Benton as its lead pastor. One of her first jobs was finding a partner for the ground-level space.

“The congregation knew it wanted to do something around homelessness because that’s a long-time passion,” said Benton. “But in getting to know the congregation, I realized that it is predominantly made up of educators who have a passion for young people. We are also very passionate about being open and affirming to GLBTQ folk because there are fewer congregations that are open (in our area).”

The congregation sent members to interview homeless youth and volunteer with existing agencies and eventually decided to partner with Northwest Youth Services.

Members of the church worked with Northwest Youth Services and an architect to design the space, and First Congregational raised the funds to complete the construction.

“To see the thought that has gone into this space, in just the smallest of details, it’s well laid out,” said Emerson McCuin, Ground Floor coordinator. “I can tell that our agency had a lot of input as to what our youth are needing, and the church was open to that.”

Northwest Youth Services supports the programming of The Ground Floor — including a director, social workers, counselors, housing managers, support staff and utilities — while the church provides and maintains the facility at no cost to the agency.

The Ground Floor celebrated its grand opening Feb. 10, attended by church members, community supporters, neighbors and the city’s mayor. The center has hosted more than 20 unique youth each week since it opened, with a use permit and staff capacity to accommodate 30 young people at a time. From 9:00 a.m. to 2:00 p.m. weekdays, youth have access to counseling, job and housing services, computers, wi-fi, a kitchen, a clothing pantry, laundry machines, showers and nap rooms in addition to communal gathering space.

David Weasley, the church’s pastor for youth, young adults and mission, volunteered at the site of the previous day center for eight months. He said that hosting the drop-in center will help the congregation better understand its community.

“My hope is that the congregation will continue to claim this as one of the really important community issues that we are watching,” he said. “And then to find ways to step into roles as advocates, as leaders, as learners on these topics, on these conversations.” 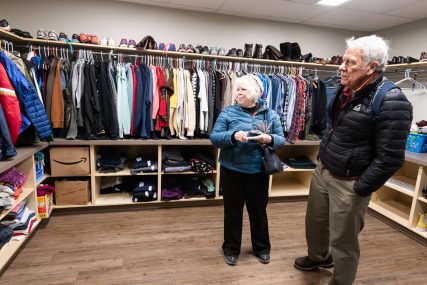 One of the most prevalent community ministry extensions in the country is recovery programming. More than a third of the nearly 62,000 Alcoholics Anonymous groups in the U.S. meet in houses of worship. A key tenet of A.A. is that individual groups are self-supporting, requiring that they pay a fair sum for use of facilities where they meet. The faith-based Celebrate Recovery program, with approximately 35,000 worldwide groups, is hosted exclusively by churches.

A Celebrate Recovery group has met at Peace Baptist Church in Decatur, Ga., since 2001. Ministry Coordinator Judi Arnold-Grant is a long-time member of the group who sees the connection between the church and the surrounding neighborhood as an integral component of the ministry.

“The ministry is there for the community,” she said of the group that meets to help people work through “hurts, hang-ups and habits.”

In Little Rock, Ark., Mosaic Church and its pastor Mark DeYmaz have been using their building to expand its ministry to the community for years.

The multiethnic, economically diverse church started in 2001 in an “under-resourced, underserved” community, said DeYmaz. It uses a parish model to focus its justice and compassion efforts on serving the 32,000 residents of the 72204 zip code surrounding the church.

Their building — a 100,000-square-foot former K-Mart they moved into in 2016 — is home to Vine and Village, an umbrella nonprofit that oversees a number of ministries, including the Orchard, the largest food distribution center in Little Rock. It also hosts the Evangelical Alliance for Immigration Services, a family-based immigration service, which started in 2005 and has since helped nearly 8,000 people complete their legal cases at or below cost.

In addition to the Orchard and EAIS immigration counseling services, Vine and Village also includes a post-foster care program for young adults, the mobile Fresh2You food market, a program for teen mothers of preschoolers, and others. Ministries are responsible for their operating costs and shared services expenses.

Several commercial enterprises also rent space from the church using a model DeYmaz calls “benevolent ownership,” in which the church charges below market rate to companies that want to provide needed services in the community.

A suburban health club is leasing half the building, providing the first full-service fitness center in the ZIP code and creating 20 jobs. A coffee shop is scheduled to open soon. For the reduced rents being charged, DeYmaz expects these companies to offer lower prices to neighborhood residents.

“If we were to keep giving away space, we wouldn’t be here in 10 years,” said DeYmaz, author of Disruption: Repurposing the Church to Redeem the Community. “But we’re going to charge these businesses lower rent and ask them to charge lower prices on their products than they do downtown because our community can’t afford them.”

It’s a model he hopes will grow. He’s training other faith communities to pursue similarly innovative ministry along with issue advocacy through Mosaix, a network of multiethnic churches.

“I don’t tell churches, ‘hey, start a separate nonprofit,’ and then they go, ‘where’s your nonprofit?’ and then say, ‘oh, it’s like five miles from here,’” he said. “The idea is to start where you’re at.” 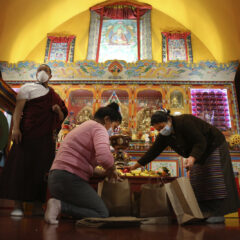 On Faith and Culture
How will the post-pandemic church pay the bills?
Follow us on Facebook!
Submit your photos to RNS