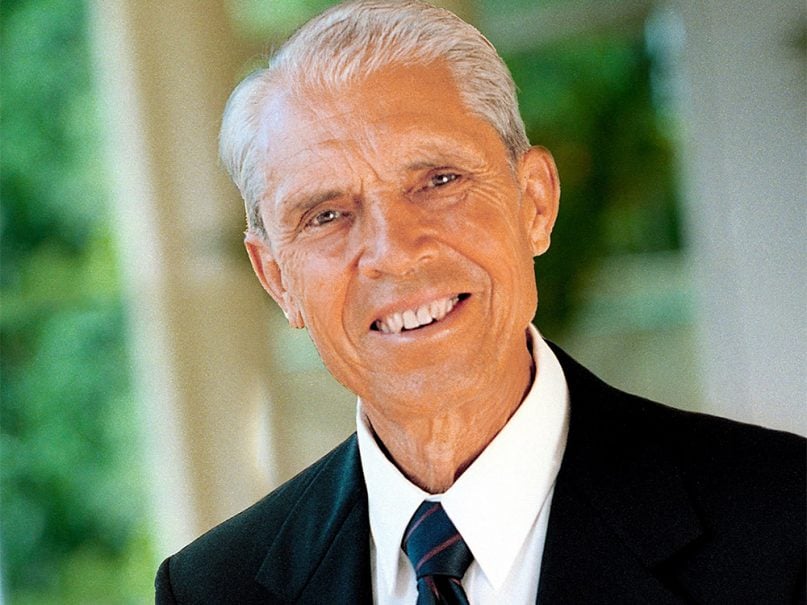 (RNS) — Desmond Ford, a Seventh-day Adventist theologian and writer whose 1980 defrocking by Australian leaders of the movement led to a schism, died in the early morning hours of March 11, his widow, Gillian, announced on Facebook.

From 1961 to 1977 Ford headed the theology department at Avondale College, a Seventh-day Adventist school near Sydney, Australia. The school, established with the encouragement of Ellen G. White, the movement’s co-founder and author of its principal texts, has long been a training center for pastors, evangelists and teachers in the South Pacific church region.

But in 1979, Ford, then a professor at Adventist-owned Pacific Union College in Angwin, Calif., gave a public presentation that signaled a major break with two of the church’s distinctive beliefs: the “investigative judgment” of every person, living and dead, which Adventists believe God has undertaken since October of 1844, as well as the prophetic timing of the sanctuary cleansing described in Daniel 8:14, which led the pioneers to that 1844 time frame.

The dispute centered on teachings promoted by White, a young 19th-century follower of William Miller, a lay Baptist preacher who set Oct. 22, 1844, as the date for Christ’s return.

When that failed, White and other Millerites believed the “Great Disappointment,” as the day was now called, signified Christ’s entry into the “holy of holies” in heaven to begin the judgment phase.

This judgment, Adventists believe, “vindicates the justice of God in saving those who believe in Jesus.” From 1844 on, Adventists believe, God has been deciding who qualifies as an authentic Christian — reviewing the lives of those who claim to follow Jesus to see if their good works match their claims of faith.

According to a 1982 Time magazine account, Ford’s research questioned White’s interpretation of the events of 1844 and the idea of the “investigative judgment.”

Ford authored a 1,000-page thesis defending his position, arguing, in part, that the “investigative judgment” teaching obscures grace and puts too much weight on a believer’s works.

Pushback from Adventist administrators of that era led to a conference – his supporters would later call it a “trial” – at which Ford spoke alongside other theologians and church leaders, including Neal C. Wilson, then president of the Adventists’ General Conference, or global headquarters.

Although that meeting, held at a church retreat center in Colorado called Glacier View, ended on a cordial note, Ford’s Australian administrators pressed for his dismissal and the removal of his ministerial credentials.

Suddenly without employment, Ford and some supporters established Good News Unlimited, an independent ministry that for years published his books and sponsored a daily 15-minute radio program, notably aired on a Christian radio station whose signal reached Adventist headquarters, among other outlets. He was in demand as a speaker in both the U.S. and Australia, to which he retired in 2000.

Speaking with Religion News Service, Neff said Ford “was a brilliant theologian who did his best to keep the Seventh-day Adventist Church from tipping over into sectarianism.”

“He preached a robust gospel of justification and made it clear that salvation is 100 percent God’s action on behalf of sinful humanity — that we contribute nothing,” Neff said. “The Adventist leadership that decided to defrock him in 1980 made their denomination much poorer for it.”

Although Ford, who lived in the Sunshine Coast district of Queensland, Australia, was out of official favor in Adventist church circles, in later years there was an entente of sorts.

He retained his membership in a local congregation, and despite what his supporters considered unfair treatment, he never campaigned against the organization.

On March 30, a memorial called “Avondale Remembers Des” is scheduled to be held on the campus, according to spokesman Brenton Stacey.

Attorney Stephen Ferguson, a Seventh-day Adventist in Perth, Australia, who wrote a 2018 article questioning the fairness of Ford’s “trial” nearly 40 years earlier, said that among other things, Ford would be remembered for elevating grace over “legalism” in the movement.

“Even the conservative side of the church was forced to confront” the issue of righteousness by faith because of Ford’s teachings, Ferguson said. “I was born in 1979, and the church I grew up in here in Australia was much less legalistic than the one (Ford) was exposed to.”

Ford was born on Feb. 2, 1929, in Townsville, Queensland, Australia. His mother purchased Adventist literature when Ford was a youngster, introducing him to the faith. In 1946, Ford attended what became Avondale College, eventually earning a bachelor’s degree in theology there.

He later earned a master’s in systematic theology from the Seventh-day Adventist Theological Seminary in Washington, D.C., and his first doctorate, from Michigan State University, in 1961. Eleven years later, Ford received a second doctorate from the University of Manchester, where he studied under the late F.F. Bruce, a noted evangelical.

News
‘The best person to rape is your wife,’ says Bronx pastor
Follow us on Facebook!
Submit your photos to RNS