A man pedals past an art installation of a boat made from plastic waste during the United Nations Environment Assembly in Nairobi, Kenya, on March 15, 2019. RNS photo by Fredrick Nzwili
March 18, 2019
Fredrick Nzwili

NAIROBI, Kenya (RNS) — At a small tent on the edge of the U.N. campus here, environmental activists from the world's faith traditions huddled on the sidelines of last week's March 11-15 meeting of some 5,000 environmental scientists, politicians and civil society, the fourth gathering of the United Nations Environment Assembly.

As the official delegates discussed current environmental challenges, sustainable consumption and production, the faith leaders, who joined the assembly for the first time in a U.N.-sponsored event called “Faith for Earth Dialogue," talked about what religion's role is in environmental protection.

“Religious leaders have a unique role to play in promoting ecological sustainability, especially because 85 percent of the (world's) people are affiliated with a religion,” said Rabbi Yonatan Neril, who is the founder and executive director of the Interfaith Center for Sustainable Development in Jerusalem and attended the event.

The faith-based group unexpectedly served as a spiritual presence after the Ethiopian Airlines crash, which particularly affected the U.N.'s offices in Nairobi, a hub of the international aid community that lost several members in the disaster.

The assembly, which represented more than 170 United Nations member states, said it had delivered a bold blueprint for change that directs a radical shift in the approach to tackling environmental challenges.

The group also agreed on a series of non-binding resolutions, key among them a proposal to protect oceans and fragile ecosystems.

But those attending the Faith for Earth Dialogue urged the U.N. to recognize the growing religious wave of concern and called for dramatic steps while saying that enough was not being done to address climate change and related environmental challenges. 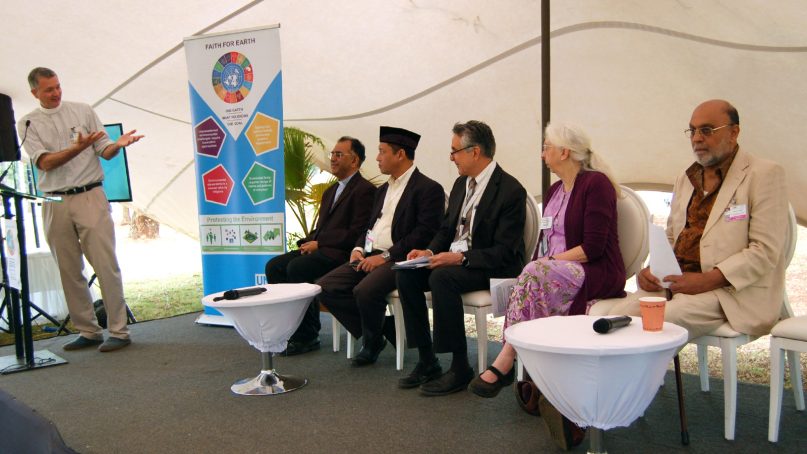 “There should be no mistake that more and more religious communities are clear that we face a clear emergency,” said the Rev. Fletcher Harper, the executive director of GreenFaith, an American interfaith coalition for the environment.

“We need a stronger representation of values, combined with science, to underlie the policies of the world in relationship to the environment,” said Harper.

At the same time, Harper said, it was not easy for intergovernmental bodies like the U.N. to integrate faith voices because their audiences are nation states, for whom religion can be a complicated subject.

The world's religions can look for ways to change their own cultures to make faith itself more sustainable, said Neril.

“Meat in particular has a disproportional impact on climate change because cows emit methane from their digestive systems,” said the rabbi. Changing diets can be difficult, but religious teaching can have a powerful effect on what we put in our mouths and can support compassion toward animals.

Rev. Joshtrom Isaac Kureethadam, coordinator of the Sector on “Ecology and Creation” at the Vatican Dicastery for Promoting Integral Human Development, said he took hope from the increasing spiritual response to climate change, including the indigenous communities around the world who view themselves as the protectors of the land or planet.

He cited climate change as one reason Pope Francis has called a special synod for October of this year of Roman Catholic bishops from the Pan-Amazonian region.

“He (Pope Francis) believes at the period of planetary emergency, the answer can come from these people, who have defended our common home for thousands of years. We can learn from their indigenous wisdom,” said the priest. “It is a time when the whole world will sit at the feet of the indigenous people and learn from them to take care of our common home.”

Above all, the faith activists urged the U.N. delegations to the assembly to approach climate change as an urgent human problem as much as a scientific one.

Bright Mawudor, the deputy general secretary of the African Conference of Churches, said in a speech to her fellow faith leaders that climate change was the world’s common future. “It’s as real as the food that we eat or as the clothes we wear. We need to tackle it with urgency,” Mawudor said.