(RNS) — For the Rev. Kaji Douša, senior pastor of Park Avenue Christian Church in New York, crossing the U.S.-Mexico border is a fairly uneventful activity. A former San Diego resident, she had passed through the U.S. Customs and Border Protection checkpoints many times in the past without incident.

But in early January, as she crossed going north from Tijuana back to the United States, something was different.

But as she attempted to walk across the San Ysidro port of entry on Jan. 2, Douša said, she was unexpectedly detained for a “secondary inspection” by U.S. Customs and Border Protection officers. She described to Religion News Service being escorted into a room, where she was met by two men who wore uniforms different from other CBP officers. Then, she said, they proceeded to pepper her with questions for at least an hour and a half.

Douša, who regularly appears on MSNBC to discuss immigration issues, said the officials not only “interrogated” her about the specifics of her trip to Mexico, but also about her faith-based coalition and why she spent her time advocating for immigrants.

Her response, she said, was a spiritual one: “Because my faith compels me — you do remember Jesus was a refugee? My sense is that when we deport someone made in the image of God, we’re deporting Jesus.” 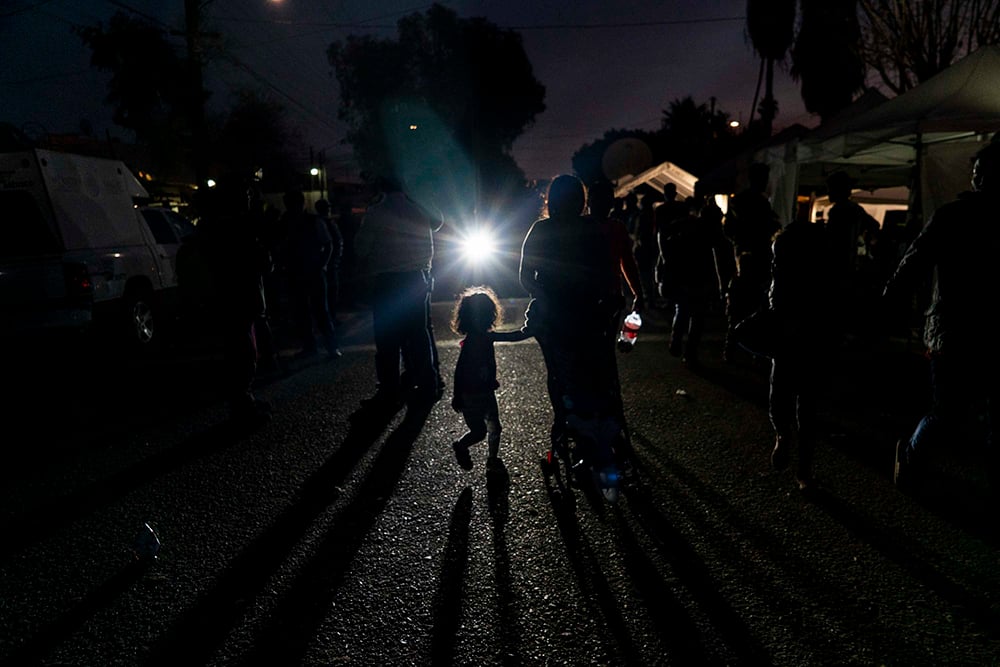 She was eventually released and able to return home, but reports of recently leaked internal Department of Homeland Security documents suggest that the intense questioning Douša was subjected to is part of an effort by the U.S. government to track and scrutinize immigrant rights activists — including, it seems, faith-based leaders such as Douša and the group she helps lead.

In documents obtained by a San Diego NBC affiliate and published on its website on March 6, Douša’s name and photo appear with a yellow “X” across her face, indicating that her visa or SENTRI pass — SENTRI stands for Secure Electronic Network for Travelers Rapid Inspection, a system that allows for expedited screening along the Southwest U.S.-Mexico border — has been revoked.

The documents showed Douša and several others listed in a secret government database of activists, journalists and lawyers that is allegedly used by agents of CBP, Immigration and Customs Enforcement, the U.S. Border Patrol, Homeland Security Investigations and agents from the San Diego sector of the FBI, according to NBC.

The documents were originally published with many names and faces blurred out. Douša said that when an NBC reporter confirmed to her that she was on the list, she was appalled.

“I broke into tears,” she said. “I was so devastated to see myself in my government’s crosshairs.”

Douša said she is also concerned her Global Entry status, which allows for expedited screening at other ports of entry and is often connected to the SENTRI program, may also have been revoked. She fears too that her ability to travel to Mexico is “in question” given that others on the list have been denied entry into the country. The Rev. Kaji Douša as she appears in an alleged government database. According to documents leaked to NBC, the yellow “X” indicates her SENTRI status has been revoked. Via Kaji Douša

Asked to confirm the leak and Douša’s account, Andrew Meehan, assistant commissioner of public affairs at CBP, responded with a statement that did not directly refer to Douša or deny the authenticity of the documents uncovered by NBC. It said the agency “initiated an inquiry in February” to address “assaults against Border Patrol Agents” in November 2018 — the same month when tensions at the border rose to the point where border agents teargassed people seeking entry into the United States.

“In response to recent incidents in November 2018 and January of this year, which included assaults against Border Patrol Agents, CBP identified individuals who may have information relating to the instigators and/or organizers of these attacks,” the statement read in part. “Efforts to gather this type of information are a standard law enforcement practice.”

Asked if she had been questioned about anything in line with the CBP’s statement, Douša, who said she was not at the border during the November confrontation, offered a one-word response: “Never.”

Douša said the revelations are frustrating because she has not been accused of any crimes.

“I know that I’m being targeted and intimidated because of my outspoken role as someone who is going to stand up for the most vulnerable people in the world,” she said. “That doesn’t feel good.”

“We emphatically call upon our nation’s leaders to immediately cease such abusive assertions of political power for the sole purpose of intimidation based in fear mongering,” the statement read in part. “We implore you to return to Rev. Kaji Dousa full access to the rights afforded her as a citizen of the United States and honor the liberties granted her, through the First Amendment of the United States Constitution, to practice the tenets of her faith without persecution. We will not capitulate to the fear tactics and abuse of political power represented by these outrageous acts of harassment that target humanitarian efforts at our southern borders.”

The incident is not the first time the New Sanctuary Coalition has challenged immigration officials.

In February 2018, the New Sanctuary Coalition, which is based at Judson Memorial Church in New York, and its executive director, Ravi Ragbir, filed a lawsuit with other groups alleging that the Immigration and Customs Enforcement agency targets prominent immigrant rights advocates for surveillance, arrest and deportation — a tactic they argue is a violation of their First Amendment rights.

Ragbir, who is from Trinidad and Tobago, alleges in the suit that officials have targeted him for deportation because of his activism.

He told RNS that the reports by NBC and others support his case, and that the government’s actions are an affront to freedom of speech and freedom of religion. “It confirms what the lawsuit alleges,” he said via email.

The case is pending in the U.S. Court of Appeals for the 2nd Circuit.

The same day that the NBC story was published, a separate article in The Nation uncovered evidence via a Freedom of Information Act request that New Sanctuary Coalition is one of several groups that ICE has been tracking in New York City.

Demonstrations affiliated with the New Sanctuary Coalition showed up on an “Anti-Trump Protest” spreadsheet distributed on July 31, 2018, by officials in Homeland Security Investigations, ICE’s investigative arm. It documented the names of the protests in New York City and the number of people who had signed up on Facebook to attend. (Douša noted that the coalition also operated under President Obama, years before Donald Trump was elected president.)

Other faith-based advocates have challenged the government’s immigration policies in recent years, with many descending on the border over the past few months. In December, at least 30 faith leaders were arrested on a beach near San Diego as they protested what they described as the unjust treatment of asylum-seekers. Some faith leaders were dragged onto the sand by officers as they were detained as others knelt to pray in the waves.

Those efforts follow years of confrontations between immigration officials and supporters of the New Sanctuary Movement, in which houses of worship allow immigrants at risk of deportation to take up residence in their buildings. ICE has a policy of not raiding “sensitive locations” such as schools and churches but has still faced off with faith leaders: In November, 27 people were arrested when a North Carolina pastor and members of his church surrounded an ICE van to prevent the arrest of a man at risk of deportation.

As for Douša, she said she is not “stepping back” from her advocacy. She is considering taking legal action and has been in contact with members of Congress, including several in the Congressional Black Caucus.

Douša said she has concerns about the effect of the border clashes on immigration officials as well. At the border, she asked her questioners about their own faith, and both identified as Christian. She said the conversation then became “less structured,” and she argued that they are “being asked (to implement) terrible policy,” that may be more than what they “signed up” for.

The next day, Douša returned with another pastor and a film crew in tow, hoping to speak with the agents again to finish the conversation, but was unsuccessful.