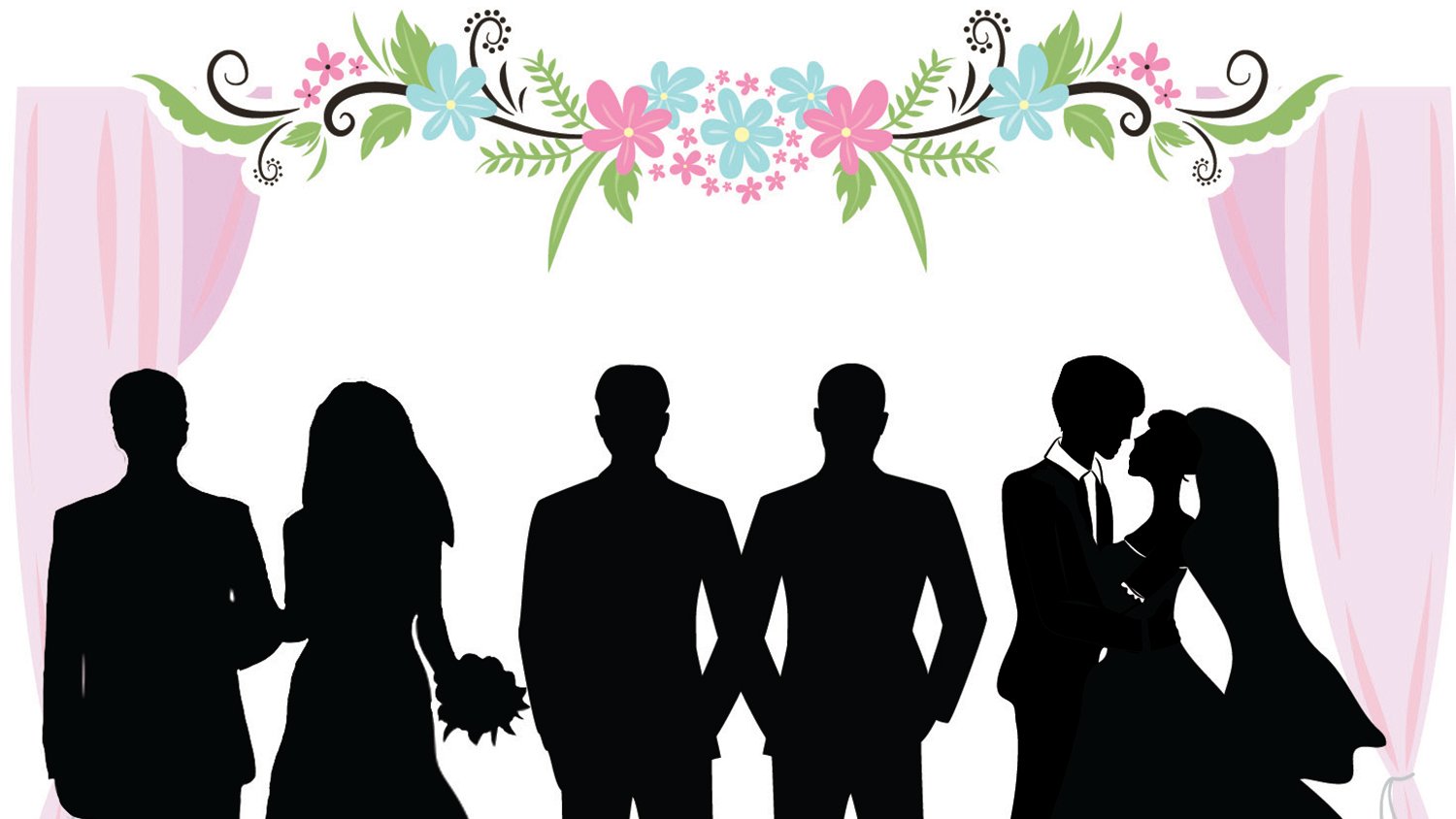 (RNS) —  One spouse is not considered Jewish by Israel's Chief Rabbinate. Another couple is gay. And the third couple wants a Reform Jewish wedding.

All three Israeli couples will be jointly wed this week at a Reform temple in Washington, D.C. in a protest against the ultra-Orthodox rabbinate that controls all Jewish weddings in Israel.

The so-called “Three Weddings and a Statement,” to be held at the Washington Hebrew Congregation on Tuesday (March 26), is intended to call attention to the rabbinate’s stranglehold on marriage in Israel. There is no civil marriage in Israel and no option for couples to marry through Reform, Conservative or other branches of Jewish religious life.

The timing of the ceremony, on the last day of the annual conference of the American Israel Public Affairs Committee, or AIPAC, is intentional. More than 18,000 Israel supporters, including Vice President Mike Pence and Benny Gantz, a leading candidate for prime minister in Israel's April 9 election, will speak at the D.C. conference.

The couples and their supporters hope Israeli politicians, media groups and Israel allies at the conference will pay attention to their concerns. Civil marriage has become a political issue for Israel's more liberal political parties, and polls show the majority of Israelis want alternatives to marriage through the Chief Rabbinate.

“We love Israel,” said M. Bruce Lustig, senior rabbi of the Washington Hebrew Congregation and one of six clergy officiating at the joint ceremony. “We’re not saying the rabbinate should go out of business, but rather there should be freedom of choice for individuals to choose how they wish to get married in Israel.”

The event comes two years after a similar wedding for three Israeli couples at Temple Emanu-El in New York City, an elaborate affair that was celebrated with klezmer music, violins, flowers, white wedding dresses and cupcakes. 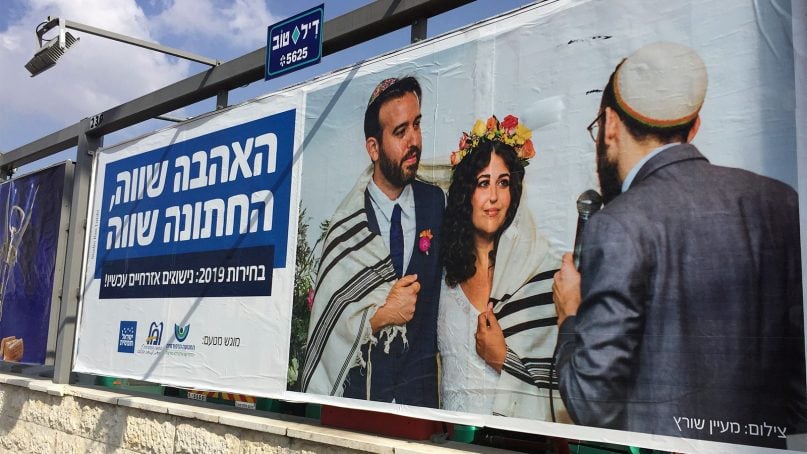 A Jerusalem billboard calling for equality in marriage ahead of the April 9 election. RNS photo by Yonat Shimron

Tuesday’s wedding at the grand 2,300-seat Washington Hebrew Congregation, one of the nation’s oldest Reform temples, promises to bring much of the same. The event is co-sponsored by Adas Israel, Washington’s large Conservative synagogue, as well as a host of other Jewish denominational agencies. U.S. Congressman Jamie Raskin of Maryland and Sen. Jacky Rosen of Nevada have been invited. The exchange of vows will be live-streamed so that friends and relatives in Israel can watch.

The three couples arrived in Washington last week and were set up with host families. Besides a jaunt to the National Mall and selfies by the Martin Luther King Jr. Memorial, the couples spent the weekend speaking to Jewish congregants about the need to end the Chief Rabbinate’s monopoly on marriage and divorce and reform Israeli law to allow for greater religious freedom.

While the State of Israel only permits Orthodox marriages when marriage is performed in Israel, it recognizes civil marriages and non-Orthodox Jewish weddings when performed abroad. Each year, thousands of Israelis circumvent the rabbinate by marrying abroad. 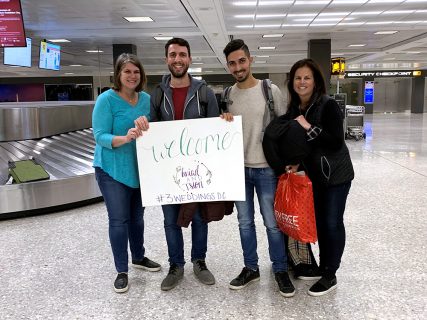 The three couples to be wed Tuesday include Aviad and Tsion Raz, two gay men living in the southern town of Beersheba. The couple held a wedding ceremony for friends and family in Israel four years ago. But because the rabbinate doesn’t recognize same-sex marriage, they are considered single in the eyes of Israeli law.

“Marriage is a fundamental right,” said Aviad Raz, 33, a pharmacist for a Israeli HMO. “Right now, there’s so much injustice in this aspect of Israeli life. So many people can’t get married and pursue their happiness because of the current law.”

Shmuel Carmel can’t legally marry Anat Ornik, his girlfriend of nine years, in Israel because the rabbinate doesn’t consider him Jewish. His late mother converted to Judaism in her native Romania, but, because she was deaf, the rabbinate disqualified her conversion. Since a person is considered Jewish if he or she was born to a Jewish mother, Carmel is not viewed as Jewish by the rabbinate, despite the fact that he was born in Israel, celebrated his bar-mitzvah there and served in the Army.

“When Anat and I wanted to get married, we thought we’d do a small service for family and friends and fly off to Cyprus for the weekend where you can have a civil wedding, and it would apply in Israel,” said Carmel, 27, a graphic designer who lives in Haifa. “But we wanted to be married by a rabbi because we wanted it to be traditional and the wedding we thought we deserved.” 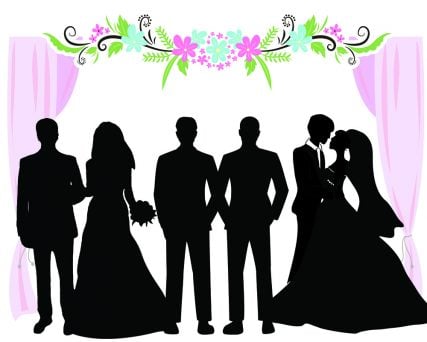 An illustration for the upcoming "Three Weddings and a Statement" in Washington. Image courtesy of Washington Hebrew Congregation

A wedding at the Washington Hebrew Congregation perfectly fits the bill.

“It just happens that Reform Judaism speaks to me much more clearly and aligns with my values,” Carmel said.

The third couple, Ilia Rabkin and Sahar Malka, is eligible to marry through the rabbinate but wanted a more egalitarian ceremony.

“I wanted to take part in the ceremony,” said Sahar Malka, the bride. “I wanted to give him a ring and read him my vows,” she said, referring to parts of the ceremony denied to Jewish women in traditional Orthodox weddings.

Lustig, whose temple is the venue for the joint wedding, said the idea of protesting Israeli marriage rules resonated deeply with his congregants, many of whom were shocked to discover the strictures on marriage in Israel.

“We wanted to make a statement that there are other ways of loving Israel,” Lustig said. “Being a Zionist doesn’t mean total conformity to the present government. We need to ensure all of Israel is heard and the will of the people is heard.”