(RNS) — On top of his duties as the director of the National Institutes of Health, Francis Collins takes time to answer letters from Christians trying to reconcile their faith with science.

At a conference last week of BioLogos, the nonprofit he founded more than 10 years ago to bridge science and faith, Collins told an audience of 360 scientists, pastors and educators about an email he received recently from a man in Nigeria named Emanuel. Emanuel was raised in a conservative Christian home but was studying to be a nurse and wrestling with whether he could hold on to his faith.

Collins told him he didn’t need to abandon his faith in order to understand what he was learning.

“I was so grateful for the opportunity to reassure this young man and his friends that there is a wonderful answer to the dilemma they face and to walk them through what that might be,” Collins told the audience assembled in Baltimore for the BioLogos conference.

A renowned geneticist, Collins is recognized in faith circles not only for his scientific accomplishments — among them piloting the Human Genome Project — but for his seemingly unshakable faith in God.

That dedication to Christianity has earned him star power among a segment of evangelicals who are eager for a more nuanced approach to science — one that accepts the findings of evolution, for example, and also regards the Bible as a source of ultimate authority.

Though Collins, who turns 69 next week, is not involved in the daily workings of BioLogos (the name combines the Greek words for “life” and “reason” or “word”), he is still its biggest draw and is a visible presence at the conference, where he played acoustic guitar for the gathering’s praise and worship sessions.

Among a vast swath of evangelicals, the organization occupies a lonely station. Many evangelicals are opposed to scientific claims about climate change, and a subset believes the Earth was created by God less than 10,000 years ago — a view known as young earth creationism. Then there’s evolution, which many churches view as a direct threat to the biblical account of Genesis that sees humans as the pinnacle of God’s creation.

BioLogos, which receives much of its support from the John Templeton Foundation, takes concrete steps to educate evangelicals about science in a way that makes room for their faith. It has recently launched a podcast and is working on curricula for homeschoolers and Christian high schools that are both scientifically rigorous and true to the historic Christian faith. Francis Collins in 2017. Photo courtesy of National Institutes of Health

But as important, BioLogos has created a space for a group of more progressive evangelicals, led by high-profile leaders such as Richard Mouw, Tim Keller, John Ortberg and N.T. Wright, who feel an urgency to help Christians heal the split.

Collins may be the best Protestant diplomat for bridging the science-faith divide. No surprise, plenty of conference participants lined up for selfies.

Though his scientific celebrity is one part of his popularity, said James Stump, senior editor for the BioLogos website, “the big draw is his personality — being around him. People are attracted to him. He’s the sort of person that when you’re talking to him, you have his attention. He genuinely cares about people.”

RNS sat down with Collins at the BioLogos conference to ask him about the challenges that lie ahead in reconciling faith and science. The interview was edited for length and clarity.

When it comes to genetics, CRISPR, the new tool for gene editing, is getting a lot of attention. What are the most important issues here that Christians need to wrestle with?

There’s one area that has moved to the top of the list in terms of its ethical consequences, that is gene editing in terms of modifying the germline, the part of the DNA that gets passed on from parent to child. Gene editing is applied in other settings, too, in a lab or to treat a patient (in a way) that doesn’t involve a part of DNA that doesn’t get passed on, as we did for sickle cell anemia. Those are not particularly controversial from an ethical perspective.

But if you’re talking about the DNA of an embryo, with the intention to produce a child that has a different spelling of their own instruction book than otherwise would have happened, that’s crossing a profoundly significant line. It has all kinds of issues of a practical sort: Can you do it, can you do it efficiently and is it safe? But it also has deeply significant, ethical, philosophical, theological issues. If we are made in God’s image, if we are fearfully and wonderfully made, as Psalm 139 says, are we really ready to take on the role of changing that?

If this were to happen in a broad way, not just to treat diseases but to enhance performance and ultimately reinvent humanity in a way that might make us a very different species, as a scientist, as a Christian, I’m deeply concerned about not crossing that line without profoundly significant debates.

But of course, this has already happened. Dr. He Jiankui in China violated every one of the principles we all thought we’d agreed to — it would have to be for a medical need and done with consent, without coercion, it would have to be safe. He did in fact modify the DNA of two twins who are now born and whose status is unknown, and I hope they’re OK. That just shocked the world. 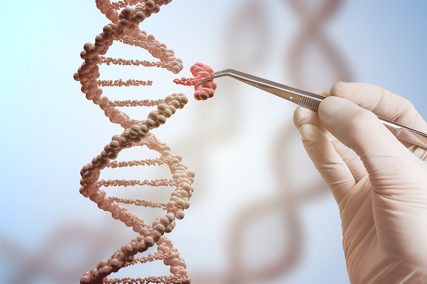 A concept illustration of genetic engineering and gene manipulation. Image via Shutterstock

I joined in a call three weeks ago for at least a five-year moratorium on any further experiments of this sort, and it should be international. Every country should take charge of figuring out if they have the appropriate legal barriers to this kind of thing, because I do not think the public has had a chance to hear about this or engage in this.

For Christians, this is a pretty serious issue, in terms of our relationship with God. It’s hard to identify instances in which you need to do this for medical purposes. Those who say, ‘Well, are you going to prevent a terrible disease in the name of your philosophical objections?’ I would say, ‘Well, show me your example of where you need to do this to prevent a terrible disease.’ It’s very hard to find those.

Several people at this conference cited a finding from the Barna Group that 49 percent of teenagers in the church agree that the church seems to reject much of what science tells us. Why is that worrisome?

If we accept the fact that the church and science are going down different pathways, we have to ask: Does one have to win and the other have to lose and is that the future we want? I don’t. I don’t want a future where science is taking over everything and our entire focus is on technology and secularism, and concepts of morality get damaged and concepts of love and beauty and spirituality take a backseat to the latest gadgets. That’s a dark kind of image.

At the same time, I don’t want a future where the fundamentalist views threatened by science decide that science isn’t to be trusted. Who of our young people would want to take part? We will lose the young people, lose the amazing opportunities, particularly in medicine, to keep going forward and slip back instead into a kind of denial of what we’re able to learn about creation through science. Either one of those options is really grim.

The alternative has to be figuring out a way for the scientific and spiritual worldview to enhance each other. That’s what BioLogos is all about.

Absolutely. If you go back in history, you’ll see that an awful lot of scientific revelation of the past many centuries has been conducted by Christians because Christians have this sense of awe of God the creator, the fact that God created an ordered universe that could be understood. That’s why Christianity has been the cradle of so many scientists in the past, because of this opportunity through science to worship a God of order.

I think that’s the case for me as a scientist: I get a special privilege in the moment of discovery to say, ‘Oh wow. Look what I figured out, and I can tell everyone else I know it,’ but also, ‘Look at this glimpse I just got of God’s mind, and what a gift that is!’ So, I think Christians bring that sense of curiosity and vision and awe.

Whether it’s adding to the body of knowledge of how life works or how the universe is put together, or whether it’s more applied and prevents a child from suffering, that feels like a calling that every Christian deep down experiences, and here is a chance to play that out in this wonderful team spirit of scientific investigations of nature.

News
At top universities, institutes of Catholic thought focus on science and religion
Follow us on Facebook!
Submit your photos to RNS