As part of its ninth annual Day on the Hill project, Ahmadi delegates from around the country met with more than 200 members of Congress or their staffers in Washington to encourage support for the Uyghur Human Rights Policy Act of 2019.

“Islam teaches absolute justice and human rights for all,” said Amjad Mahmood Khan, national director of public affairs for the Ahmadiyya Muslim Community USA. “Our faith asks of us not to rest until the international community protects the rights of all people of faith, including the Uighur community, who have endured unspeakable cruelties.”

Delegates also brought attention to the rights of Myanmar’s Rohingya Muslims and Middle Eastern Christians, whose persecution has been the focus of Hill visits in previous years.

“As a community that is persecuted ourselves in some parts of the Muslim world, we are obligated to stand up for our brothers and sisters in faith who are suffering,” said Khan. 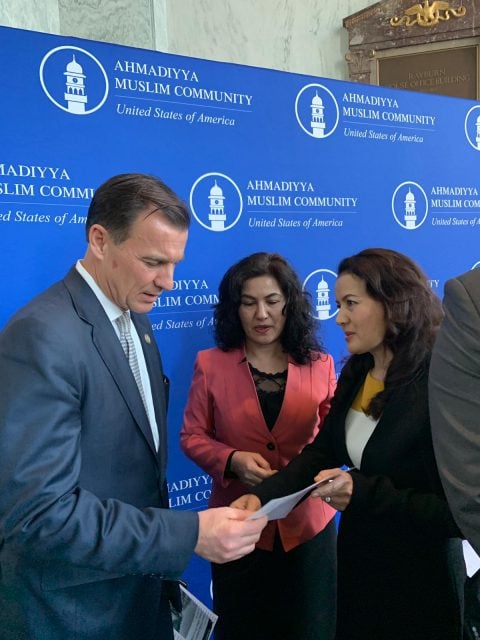 Ahmadi Muslims, who belong to a sect that began in South Asia in the late 1800s, are subject to severe state-sanctioned persecution.

In Pakistan, the constitution forbids Ahmadis from calling themselves Muslim and the penal code imposes the death penalty for Ahmadis who practice their faith freely. Just last month, after years of advocacy from human rights advocates and U.S. political leaders, Pakistan released an 83-year-old Ahmadi bookseller partway through his eight-year prison sentence for propagating his faith.

“What we want for ourselves, we also want for everybody to have that,” explained Mansura Minhas, an Ahmadi woman from Fort Lauderdale, Fla., who visited four congressional offices during her visit. “Hearing these personal accounts of Uighurs was simply harrowing. We also understand the repercussions of having religious freedom taken away, so we stand with all our brothers and sisters, regardless of their faith.”

Reports suggest that China has systematically detained more than 1 million members of the largely Muslim Uighur ethnic minority in western parts of the country, confining them in a massive network of extralegal detention camps.

Authorities insist the camps are for vocational training, but eyewitnesses say detainees are subjected to psychological indoctrination, forced labor, sleep and food deprivation, beatings, waterboarding and other forms of torture, and have been forced to renounce their religion. China’s rapidly expanding surveillance state has also been deployed as part of the brutal crackdown on Uighur and Islamic culture.

“Everything that makes the Uighurs unique has been treated as an abnormality and targeted: language, culture, history, religion and ethnic identity,” said Rushan Abbas, founder and director of Campaign for Uyghurs. Abbas says her aunt and sister vanished in Xinjiang six days after she publicly spoke out about her in-laws’ disappearance.

“Where is the outrage against such horrendous, repugnant catastrophe that is happening on our watch?” Abbas asked at a reception held Monday for the Ahmadiyya Muslim Caucus, a 5-year-old group made up of members of Congress from both sides of the aisle. “Isn’t anyone seeing that Uighurs are facing cultural and physical genocide today because of their identity and religion?” Abbas and other Uighurs — including a woman whose husband, scholar Yalqun Rozi, was sentenced to 15 years in prison for his Uighur-language writings — joined Ahmadi delegates at the reception, as did human rights leaders and several members of Congress.

“It’s very unusual that a group that is under siege themselves takes the time to reach out on behalf of another community and realizes that religious freedom must be truly universal,” said Rep. Pete King, co-chair of the 32-member caucus, which formed in 2014 to focus on global religious freedom and remains the only Muslim caucus in Congress.

In February, a coalition of more than 130 U.S. Muslim leaders and scholars signed an open letter calling for the release of Uighur detainees from internment camps in Xinjiang. But Muslim leaders and governments of Muslim-majority countries around the world have largely remained silent in the face of mass detention of Uighurs.

“The violation of human rights at this scale is a crime against humanity requiring immediate intervention,” Harris Zafar, assistant director of public affairs for the Ahmadiyya Muslim Community USA, told Religion News Service. “Muslim countries have been surprisingly silent on the extreme treatment of Uighur Muslims. Some have even forcibly returned Uighurs to China.”

In the U.S., bipartisan political leaders have been increasingly taking up the Uighur cause. Four U.S. representatives published an open letter last month calling on the White House to make good on its promise to explore sanctions on China for its human rights abuses.

Two bills in the House and Senate, which the Ahmadiyya Muslim Caucus is rallying support for, would direct federal resources to address China’s human rights violations, including the intimidation and threats reported by U.S. Uighurs like Abbas.

“China seems to be at war with faith, and it’s a war they will not win,” noted Sam Brownback, U.S. ambassador-at-large for international religious freedom, at the reception. “Governments come and go, but faith stays.”

Brownback, who attended an Ahmadi convention over the summer and met with the group’s international faith leader in October, urged all Americans to bring the Uighur crisis to lawmakers’ attention.

About 400 Muslims from the Council on American-Islamic Relations and the U.S. Council of Muslim Organizations were also on Capitol Hill on Monday, hosting their fifth annual National Muslim Advocacy Day to discuss domestic issues affecting Muslim communities.