NEW YORK (RNS) — Even in an expensive city that breeds unusual living arrangements, this is not your average New York roommate situation.

At dinnertime on a Tuesday night at Ford Hall, a four-story brownstone on West 114th Street in Manhattan’s Morningside Heights neighborhood, six residents, of 15, gather for the first dinner shift at a long rectangular table laden with a larger-than-life pot of pasta smothered in vodka sauce, a bowl of sausage, mixed greens and a half-empty plastic bottle of raspberry vinaigrette. It’s a warm evening, so some of the diners suggested a move to the backyard.

But first the sign of the cross is performed. Grace is said.

At Ford Hall, a 45-year-old co-op for single Roman Catholic graduate students at Columbia University, spirituality and social connection go hand in hand. It’s a natural combination for most millennials of faith, even if these millennials are more traditionalist than most, with upbringings that can run counter to other digital natives’.

“I went to an all-girls school. I was really sheltered,” said one 28-year-old resident, who had never had roommates before moving into Ford Hall. “I never really had guy friends.”

In Ford Hall, she said, she finds the unplanned interactions with like minds a boon. “I’m up in my room really struggling with something in my head, like a negative thought, upset about something and deeply sad, and I’ll come down and it will totally change.” 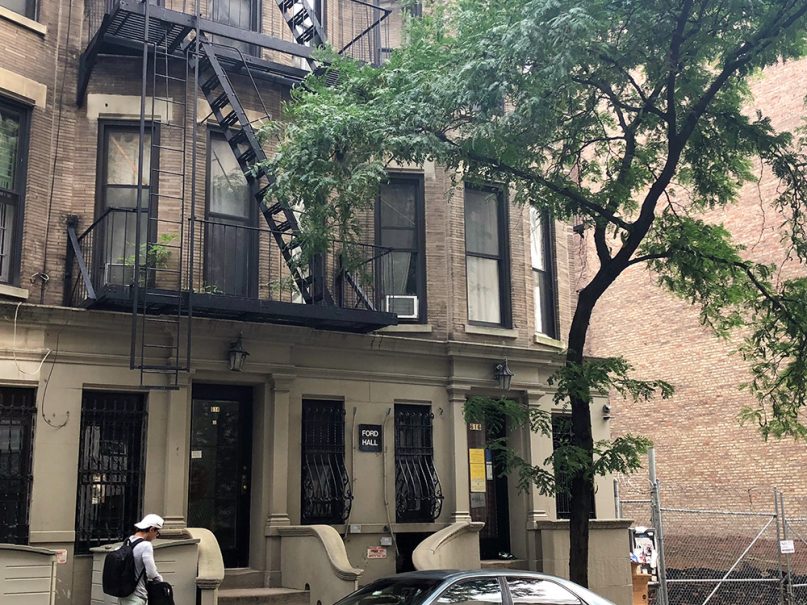 Besides identifying as Catholic — applications must include a spiritual recommendation from a priest or other faith leader — and pursuing a Columbia degree, “Fordies” are also expected to exhibit a desire for relationships and the willingness to take on a role such as a house director, finance director or social director. They’ll also cook for their housemates once every three weeks.

“A lot of New York relationships are very fast-paced and goal-oriented,” said Atkinson. “It’s really nice to be sitting on a couch next to someone who is a theoretical physicist and you’re an actor and talk about what you think life is about and what you’re aiming for. I’ve had deep, long, into-the-early-morning conversations.”

Once they apply, prospective residents are invited to dinner. Afterward, the housemates decide whether to admit them. In 2018, four people applied for three rooms, though a few years back 13 people graduated at once, and a new set of residents moved in. 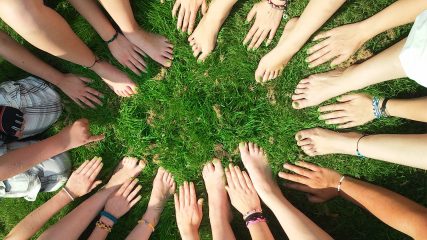 Currently, there are six women and nine men, whose ages range from 24 to 32, from America, Portugal, India, Canada and elsewhere around the globe. Each resident has his or her own bedroom and shares one of the 12 bathrooms. The decor might be described as ’70s grandparent: a cork bulletin board in the dining room is layered with prayer cards, Mass cards and notes from alumni. Lining the walls of the creaky stairs are framed group photos of Fordies past, mostly in red holiday sweaters in front of a Christmas tree.

When Ford Hall opened in 1974, the headline of a New York Times article announced “22 Columbia and Barnard Students Form Coed Commune to Replace ‘Inhuman’ Dorm.” Today Ford Hall isn’t a commune but an “intentional community,” though rent includes, besides the weekly dinners, house necessities such as paper towels and batteries.

Its goal, to offer a center for Catholic life on campus, has stayed consistent. Ford Hall opens its doors once a month for community dinners and weekly for men’s and women’s Bible studies.

As the core of that faith life, the house also hosts a weekly Mass (currently on Tuesdays after dinner) in the cramped chapel tucked into a former bedroom. Attendance isn’t mandatory but strongly encouraged. The homily, given by Columbia’s resident priest, the Rev. Daniel O’Reilly, is tailored to the residents’ lives. Each school semester begins with a required retreat for all occupants.

Other spiritual aspects of the house are less structured. Suffering a difficult breakup, one resident came home to a note on her bedroom door: you are a beautiful strong, holy, and intelligent woman. You are so deeply loved. She said, “That was the message I needed to hear.”

Prayer, one resident told me, is what helps enable this culture of connectedness. “I really believe that being open to being vulnerable in prayer with others helps us then be vulnerable in all of our aspects of life and gives us ease with which you can go deeper and have difficult conversations.”

The house’s legacy is an openhearted Catholicism fostered by its namesake, the Rev. George Barry Ford, who was Columbia’s first Catholic chaplain, serving from 1929 to 1946. His memoir, “A Degree of Difference,” a copy of which can be found in Ford Hall’s bare-bones library, traces a musty trail back to the days when Ford was a prominent figure on campus and in the city. The “embodiment of liberal Catholicism,” according to a Columbia Spectator article from 1956, Ford “left his mark as Columbia University chaplain, church, pastor, ecumenical ground‐breaker, civil libertarian and friend to many of the city’s best‐known citizens,” The New York Times wrote in his obituary.

Also the pastor of nearby Corpus Christi Church, Ford was a key player in Thomas Merton’s conversion to Catholicism. 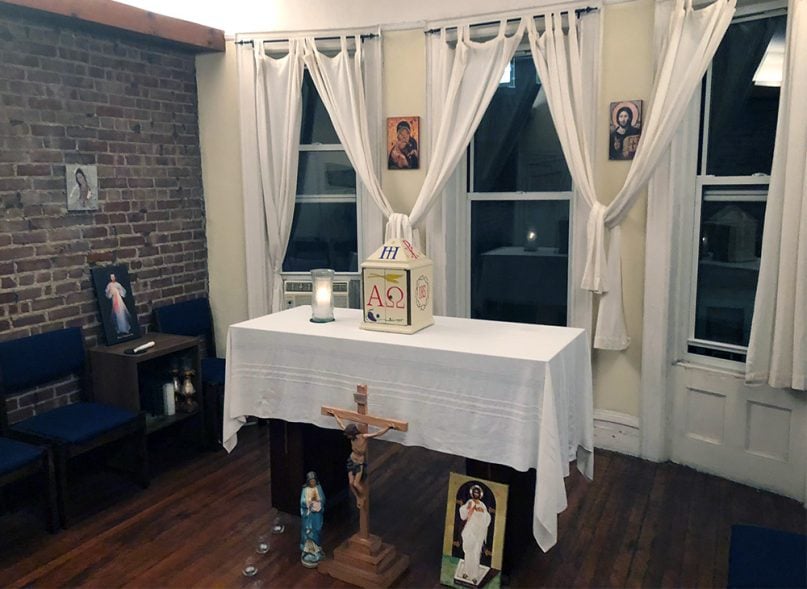 Ford Hall hosts a weekly Mass for residents in its house chapel in Manhattan. RNS photo by Gina Ryder

“We definitely discuss current events and politics,” one resident said in an email. “We had a pretty lively discussion about the (Justice Brett) Kavanaugh hearings at dinner. I have also talked to a couple of people about the sexual abuse in the Church, and what we can do about it. The outcome of one conversation was deciding to pray a novena together and fast for a day. Another conversation was about whether or not to donate to a diocesan capital campaign.”

But the larger state of Catholicism seems to be less important than personal faith and its effect on their shared community. This includes personal morality. Alcohol is allowed and it’s common to share drinks together, but while no one is required to take a vow of celibacy to live in the house, premarital sex is not permitted under Ford Hall’s roof. Technically, even intrahouse romance isn’t permitted, but rumor has it two housemates are an item (though rumor also has it the couple sought permission from their housemates and O’Reilly.)

Several residents repeated part of a sermon that Father Gabriel, a Franciscan friar described as “a friend of the house,” gave on retreat, in which he said that living at Ford Hall is preparation for vocation and marriage, a perspective that a former male resident has embraced. He said, “All the things that are difficult with living with 14 other people are all in preparation for the flexibility, openness, transparency that’s all required in marriage.”

Transparency can be a difficult quality to develop for young people accustomed to curating their digital selves. In a survey of 20,000 Americans over age 18, researchers from Cigna found loneliness to be at epidemic levels and that only around half of Americans (53 percent) have meaningful in-person social interactions, such as having an extended conversation with a friend or spending quality time with family, on a daily basis.

Fordies seemed to be grateful for this culture of openness. Said one resident: “I was talking about how I was really frustrated that I’m applying for jobs right now and things aren’t matching the time frame and how that can be annoying but that God has a plan. This is a conversation I would not have had before living here.”

As for flexibility, tension usually arises in the kitchen, where the days start with 15 cups of coffee and wrap up with 15 plates for dinner. One resident told me, “People have different definitions of what’s clean or what annoys them. If you happen to be picky about cleanliness, it can be difficult.” Two residents said they’d softened in their attitude toward cleaning, accepting that unity is a larger goal.

But more than one resident expressed a wish for this kind of living situation after they leave school. “I think it would be fantastic for there to be young adult Catholic houses like this,” one said. “It’s really when you leave and enter the professional world that you can find yourself more isolated and alone and not in that community.”

It’s hard to argue. After dinner, white ramekins are brought out as well as two gallons of Breyers and an ice cream scooper. The choice between coffee-flavored or cookie dough looms. One resident takes orders and passes the ramekins around. As night comes on, the second round of Fordies appears at the table.

As the second-wave dinner crowd makes its way inside, the first wave is flopped on the couch, gathered around one resident who is leaving selfies on a phone someone left on a living room table.

Having to leave, it seems, is one of Ford Hall’s flaws. One resident who has since moved on said, “One of the hardest parts of moving out is knowing that I wouldn’t have anything like this ever again unless I have, like, 15 kids.” 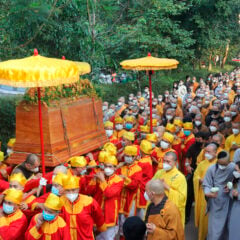 Opinion
How Thích Nhất Hạnh changed the world beyond Buddhism