(RNS) — Germany’s armed forces will soon appoint Jewish chaplains, almost 100 years after rabbis last served with the country’s military. The forces will also welcome imams into their ranks to minister to Muslim troops.

After the Nazi era and the Holocaust, the few Jewish males born in postwar Germany were exempted from military service. Since the military draft was effectively abolished in 2011, however, some have volunteered and about 300 are now in uniform.

Josef Schuster, president of the Central Council of Jews in Germany (ZJD), said in February that Germany had changed so much that it was time “to revive an old tradition.”

“Seventy years after the end of the Second World War, it’s time to have Jewish chaplains again in the German armed forces,” he wrote in an op-ed piece in the daily Frankfurter Allgemeine Zeitung.

German politicians seemed relieved to have the proposal come from the Jewish community, which has grown since Germany’s 1990 reunification from about 30,000 to almost 120,000.

“As defense minister, it fills me with gratitude and joy that women and men of the Jewish faith serve in our armed forces,” Ursula von der Leyen, a close ally of Chancellor Angela Merkel, told a three-day conference on the issue in Berlin on Wednesday (April 3). She added, “Military rabbis used to be an integral part of a soldier’s everyday life in the German armed forces. I’m glad that they will be again soon!”

Schuster told the conference organized by his ZJD, the main umbrella group for Jewish organizations in Germany, that the appointment of rabbis to the chaplain corps “is a sign of the growing trust of the Jewish community in the Bundeswehr (armed forces) as part of our democratic society.”

At present, only Protestant and Roman Catholic chaplains are available in the Bundeswehr, the name for the armed forces that includes the army, navy and air force. About half of all soldiers have identified as believers, with 53,000 Protestants and 41,000 Catholics.

About 3,000 Muslims have also enlisted but until now had no Islamic chaplains for legal reasons. Christian chaplains serve under contracts between their churches and the Bundeswehr, but Islam is decentralized and had no single nationwide body for Berlin to sign a contract with.

As it would have been politically difficult to appoint Jewish chaplains but not Muslims, however, the Defense Ministry is opting to use so-called service contracts to bring imams into the chaplain corps on an individual basis.

The ministry would soon name small groups of Jewish and Muslim chaplains and expand after assessing their initial experience, von der Leyen added.

Michael Wolffsohn, a German Jewish historian, told DLF radio that about 100,000 Jewish soldiers fought for Germany in the First World War. “Many of them who survived the First World War were later murdered by the Nazis,” he added.

Wolffsohn, who was born in Tel Aviv in 1947 to refugees who later returned to Germany, said it was only natural that young Jews growing up in a democratic Germany should serve in its armed forces.

Exempting them indefinitely would amount to a kind of “positive Nuremberg Laws,” he said, referring to the anti-Semitic race laws the Nazis passed in 1935.

Beyond leading religious services and providing spiritual guidance, Jewish and Muslim chaplains’ duties will include certifying whether meals are kosher or halal.

Rabbis could add specifically Jewish ethical considerations into their discussions with soldiers, said Wolffsohn, citing as an example a debate among scholars who say Christians mistranslated the biblical commandment “Thou shalt not murder” as “Thou shalt not kill.” 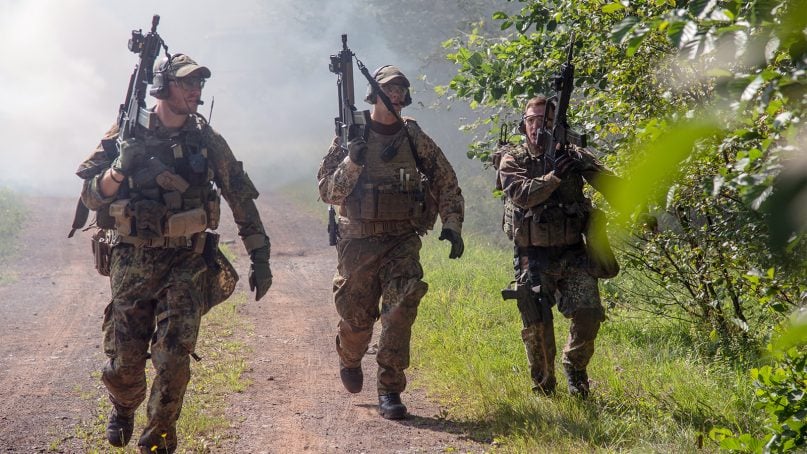 Von der Leyen also saw the new chaplains as a sign the armed forces wanted to stand up to growing intolerance in society. “Especially in times when anti-Semitism, religious polarization and bigotry are on the march, this is an important signal,” she said. “We want to oppose that together decisively.”

Schuster said the military was investigating about 450 far right-wing Germans in its ranks, some of whom have been expelled. A Jew faced with anti-Semitism from fellow soldiers might prefer to signal this to a rabbi who is familiar with the armed forces but outside the chain of command.

Like their Christian counterparts, the new chaplains will be proposed by their religious communities, with the Bundeswehr making final decisions on who is appointed.

For the Jews, ordination as a rabbi is a requirement. Since Islam does not have the same structure, Muslim candidates will need to have a diploma in Islamic theology from a German university and undergo a security check.

Schuster said two Jewish chaplains, one liberal and one Orthodox, would be enough for the small number of Jews in the forces.

Agreeing on Muslim chaplains will probably be more complicated, especially since the largest Muslim organization in Germany — the Turkish-financed DITIB — has come under increasing criticism as an apologist for the conservative policies of Turkey’s president, Recep Tayyip Erdogan.

Bishop Sigurd Rink, the chief Protestant chaplain, has already said Muslim chaplains must not have any links to DITIB or “be dependent on money from Arab states or preach the maxims of the Muslim Brotherhood.”

News
‘A dear friend’: Syrian carves model of Cologne cathedral
Follow us on Facebook!
Submit your photos to RNS