CHICAGO (RNS) — Sara Nimori, president of the student government at Moody Bible Institute, said students were shocked and saddened last year to hear that the school’s president had resigned.

J. Paul Nyquist, its former president, had worked to make the evangelical Christian school a welcoming place for a diverse student body.

But his tenure became controversial. In response, the school’s board of trustees decided Nyquist and two other leaders had to go.

A year later, the school formally installed its new president in the same auditorium where students heard that first announcement — a move that felt bittersweet, Nimori said.

“So much of this journey has just been mourning mixed with joy,” she told the audience gathered for the occasion. 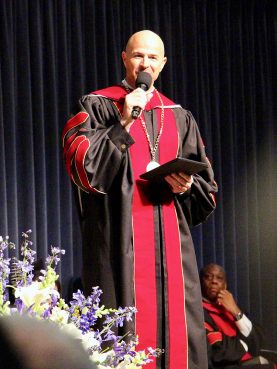 Mark Jobe speaks at his inauguration as the 10th president of Moody Bible Institute on the school’s downtown Chicago campus on April 5, 2019. RNS photo by Emily McFarlan Miller

Moody students and faculty, several past presidents and other guests gathered Friday (April 5) at Moody’s downtown Chicago campus as Mark Jobe was installed as the 10th president of the historic institution founded 133 years ago by evangelist D.L. Moody.

Jobe is the third president to lead Moody in the last dozen years.

During his inaugural address, he acknowledged the school has been through “challenging times.”

“But I believe that we’ve emerged on the other side of crisis with a more firm determination than ever before to be what God has called us to be,” he said. “We see hope and opportunity in the future in the midst of a rapidly changing world.”

The departures came as there were “public accusations made against those leaders,” said T. Randall Fairfax, chair of Moody’s board of trustees. They included concerns about theology, the school’s finances and its embrace of diversity. Fairfax told Religion News Service the board found those accusations to be untrue.

But it also found that former leaders failed to communicate “a clear understanding and direction of where the institute was going,” he said.

“That ultimately, in the simplest words did not create the most healthy environment on campus,” he said. “So we had to make a decision: How could we get to a healthier environment and a better vision in a very difficult time?”

It was “time for a new season of leadership” at Moody Bible Institute, a statement from the board of trustees said at the time. 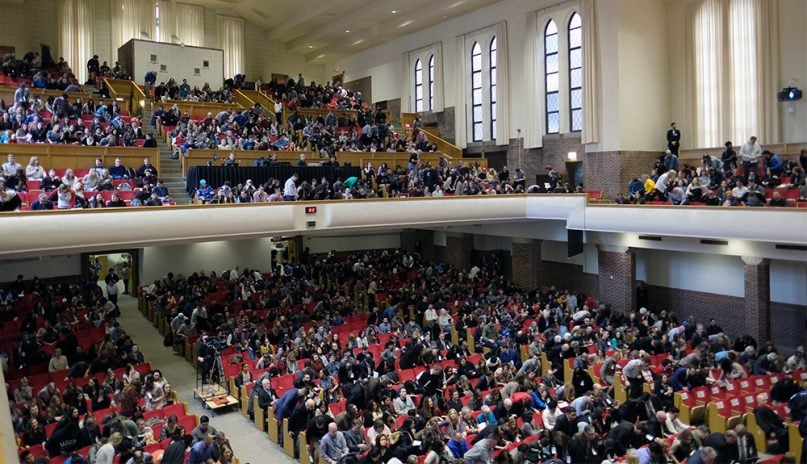 For students, it was time for a revival of their voices on campus, according to Nimori.

“I’ve never seen students show their care so much for their school by asking all of these questions,” the senior told RNS.

During the search for a new president, students shared their thoughts and concerns with the search committee, said Nimori. They gathered to pray in the president’s office on campus.

Ultimately, they were excited when Jobe was announced last fall as the new president of Moody, Nimori said.

In the semester he already has been on campus, the student government president said Jobe has been energetic and engaged with students, the “cool president” with a youth pastor vibe who eschews ties for turtlenecks. He’s also a charismatic speaker whose messages continually encourage students to focus on Jesus, she said.

She hopes he also will continue Nyquist’s work on diversity. “He was very much a champion of diversity at a place like Moody, where for so long we’ve had a history of being pretty homogenous as a student body,” Nimori said.

Since Nyquist departed, the school has opened an office of multicultural students and a diversity committee; celebrated Black History Month, Asian Heritage Month and Hispanic Heritage Month; and prepared to be a place that did not just enroll students who are more ethnically or racially diverse, but also prepared to welcome them, she said.

On Friday, Nyquist returned to campus to take part in Jobe’s inauguration.

The auditorium roared as faculty members, trustees and officials marched to the stage, led by Jobe and former Moody Presidents Joseph Stowell and Nyquist. Both sat onstage alongside Jobe, and Nyquist later draped a medallion with the school insignia around Jobe’s shoulders as the new president knelt onstage.

During the ceremony, students, alumni, faculty and representatives of Chicago-area Christian schools shared words of greeting.

Wheaton College President Philip Ryken told Jobe his leadership was vital “because of Moody’s enduring potential for future service to the kingdom of God as a biblically sound, theologically orthodox, ministry minded, beautifully diverse academic community with an ever-growing heart for this city and for the wider world that Jesus came to save.”

Then Jobe shared his vision for the Moody Bible Institute.

He paced the stage with a handheld mic, occasionally checking his notes on an electronic tablet, as he described his role as “chief dreamer” of the school and his vision for “20 in 30” — reaching 20 million people by 2030.

To do that, he said, the school would have to double its enrollment from 3,000 to 6,000 students, double readers of books released by Moody Publishers, double listeners to Moody Radio both on radio stations and online.

“At a time when higher education institutions are struggling with dwindling numbers, we’re preparing for the opposite,” he said.

Jobe’s vision “to create the leaders that will evangelize and transform the world” at Moody is part of what appealed to the presidential search committee about him, according to Fairfax, who was a member of that committee. 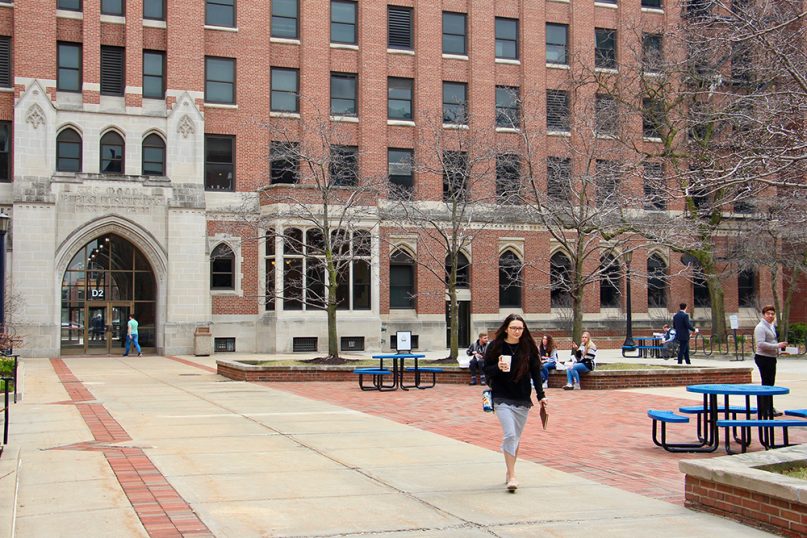 The courtyard of Moody Bible Institute’s downtown Chicago campus on April 5, 2019, after the inauguration of Mark Jobe as the 10th president of the historic Christian institution. RNS photo by Emily McFarlan Miller

The new president graduated from Moody in 1984 and founded New Life Community Church in 1986. New Life now has 27 locations across the Chicago area and eight around the world.

Moody’s board president said he hoped the “larger evangelical world” was celebrating Jobe’s inauguration along with them.

“It’s a big team game, and it’s good when you get all the players healthy,” Fairfax said.

In his address, Jobe also shared the challenges he saw ahead for the Moody Bible Institute: a rise in the religiously unaffiliated among millennials, changing demographics, globalization, a growing hostility to Christian values, suspicion of church leaders, biblical illiteracy.

And he shared the opportunities he saw for the school.

“I pastored in the city of Chicago for a long time, and I know how amazing it is that a place like this exists in a city like this,” Jobe said.