(RNS) — The bar and bat mitzvah ceremony is usually followed by an elaborate celebration and windfall of gifts. But many 13-year-old Jewish boys covet just one item: a hat.

The head covering preferred by Orthodox Jewish boys and men especially is a stylish black Italian fedora known as a Borsalino. It has a hoiche (high crown in Yiddish), a noticeably wide brim and a $325 price tag. That’s due in part to its unique construction. This is not a mass-produced hat.

“It’s a very complex process and it takes about eight weeks to make one hat,” said Steven Goldstein, owner of Bencraft Hatters in Brooklyn, New York. “What separates the Borsalino from just about all the other companies is that they start out from the beginning and produce their own felt bodies and they can control the quality and the stiffness from the start.”

Bencraft is the largest retailer of Borsalino in the world. Goldstein said he sells “quite a few thousand” each year, many of which are gifted to a boy after he is called to the Torah.

“When a boy turns 13 and gets bar mitzvahed, it’s a step to manhood and one of the rituals is that he gets a new hat, sometimes two — one for weekdays and the other for the Sabbath. And usually the one for the Sabbath, if the parents can afford it, it’s a Borsalino,” Goldstein said. The Borsalino is considered the Cadillac of fedoras. Harrison Ford wore it in the various Indiana Jones movies, as did Humphrey Bogart in “Casablanca.” So did Ernest Hemingway and Winston Churchill. More recently, celebrities from Johnny Depp to Rihanna and Madonna have sported it.

This special black hat has been made in Alessandria, Italy, since 1857, when the company was founded by Giuseppe Borsalino.

The hat’s quality and meticulous 52-step handmade construction process may explain its popularity among glitterati. Its ascendance among Orthodox Jews is more complicated.

Rabbi Shaya Mintz, executive vice president of Kollel Toronto, likens it to a businessman dressing for an important meeting.

“It brings a presence,” Mintz said. “Whenever we stand in prayer when we greet our creator and thank our creator for that which we’ve been provided, we don’t go into a private meeting of that nature in plain clothing.” 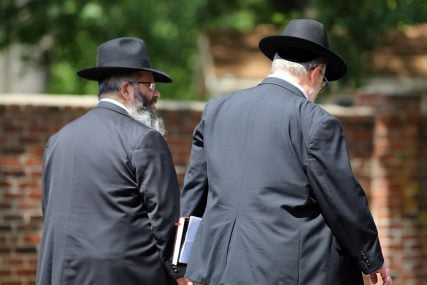 Torah-observant Jews generally wear a yarmulke during prayer and just about everywhere else as a reminder that God’s presence is always above. There are a number of references to the practice in the Talmud. Any type of hat would theoretically suffice. However, Jewish men who wear the Borsalino fedora also have a generic yarmulke on underneath it.

One theory is that the “Chofetz Chaim,” a treatise on Jewish ethics and laws by the influential Belarussian rabbi Israel Meir Kagan, proclaimed that it’s proper to wear an extra head covering at a time of prayer.

That text didn’t specify the type of hat, though. The practice of wearing a fancy hat may be traced to the mid-1800s and Nosson Zvi Finkel, an Eastern European Orthodox Jewish teacher who had many poor young men as students, according to Rabbi Menachem Tendler, the head rabbi at U. City Shul in St. Louis.

“Finkel’s thing was that if the Torah is the manual for the world, you’ve got to be respectable, to be dignified,” said Tendler. “He instituted a uniform and he raised money so every boy in his synagogue would walk around in a suit, a hat and a tie. They would walk around town and people would say, ‘That is a successful person.’ It was an image he created for the yeshiva boys.”

Tendler owns three Borsalinos, which he wears only for prayer or special occasions. He admits that when he puts one on, he feels its presence. 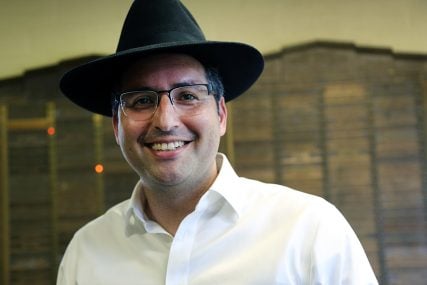 Tendler was quick to point out that wearing one or two head coverings does not make a man a better person. That can only be proved by his actions.

“It doesn’t mean I’m a better Jew than anybody else,” he said. “The hat doesn’t make you more observant, and you’re not less observant if you don’t have a black hat.”

When questioned about the hat’s popularity among Orthodox Jews, Borsalino official Lorenzo Lodigiani was noncommittal.

“Our only belief is quality and we take very seriously the importance of keeping our production at a high level for all the people who share this value with us, no matter their provenance, their beliefs or even their religion,” Lodigiani said.

There’s no question that Torah-observant Jews place a special significance on it, according to Bencraft Hatters’ Goldstein.

“In the religious community, the loyalty is there to the Borsalino,” Goldstein said. “It is still the best hat that is made, and especially popular with the younger generation. It’s similar to how sneakers are popular with young kids all over the country. It’s considered a status symbol and it’s easily recognized from all other hats.”

Opinion
The Jewish way to celebrate Jerusalem Day
Follow us on Facebook!
Submit your photos to RNS