The Québec government is proposing a secularism law to prohibit any new public servants in a position of authority — including teachers, lawyers and police officers — from wearing religious symbols while at work.

The bill incorporates the language of the law from last year’s Bill 62, which prohibits people from wearing face coverings when they receive government services — including health care and day care services and using public transit.

Bill 21, An Act Respecting the Laicity of the State, follows laws previously put forth by Québec’s governments — the Liberal Party in 2010 and 2017 and the Parti Québécois in 2013. But parts of these law were suspended after court challenges.

This time, the provincial government invoked the “notwithstanding clause” to ensure it holds up against constitutional scrutiny. The clause allows provincial or federal authorities to override sections of Canada’s Charter of Rights.

The bill also proposes to permanently amend the Québec Charter of Human Rights and Freedoms to accommodate state laïcité, the French principle of strict separation between church and state.

Christian culture as the norm

In my research at Carleton University, I have been tracking what I call “Christian liberalism.” I look at the role of religion within the liberal democratic state — and how Christian frameworks, norms and values are embedded into the history of law and public policy in the United States and Canada.

At first glance, the strict secularism (or laïcité) of Bill 21 appears intolerant of religion in all its public forms. But the neutral and secular language of the bill presumes an invisible Christian default when outlining the rules around public expressions of religiosity. 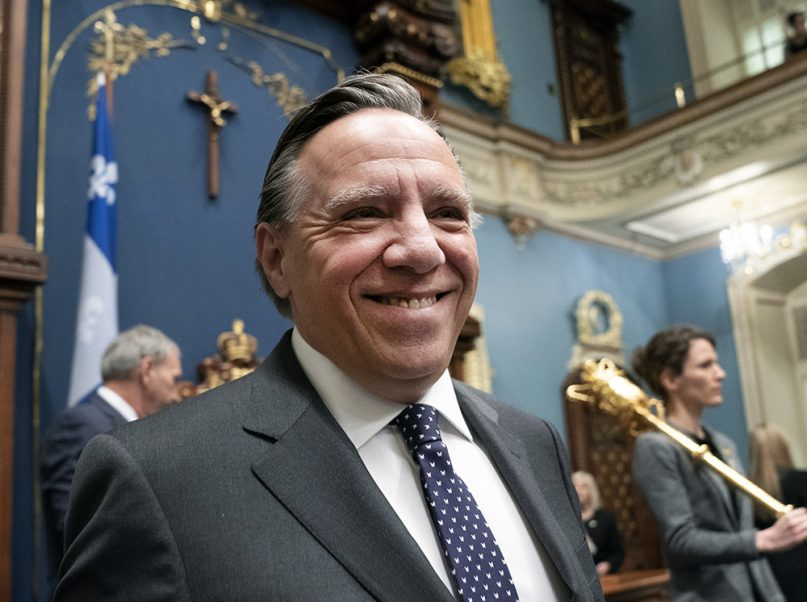 Quebec Premier Francois Legault on March 28, 2019, as his government voted on Bill 21. The crucifix behind him would likely disappear if the legislation is passed. (THE CANADIAN PRESS/Jacques Boissinot)

For example, the Charter of Values put forth by the Parti Québécois in 2013 proposed banning “conspicuous” religious symbols from the public service sector. But it drew a line between “subtle” religious expressions (like a crucifix necklace) and “overt” ones (like the Islamic headscarf).

The language of conspicuousness reveals that what is determined to be permissible religious expression is a “familiar” and historically embedded Christian understanding.

The use of the notwithstanding clause and the proposal to amend the province’s Human Rights Charter pose real constitutional threats. Given the rise in hate crimes targeting racialized and religious minority groups in Canada, the 2017 terrorist attack on a Québec City mosque and the recent attack in Christchurch, New Zealand, the suspension of religious freedom rights should raise alarms.

According to the non-profit human rights group the National Council of Canadian Muslims, the bill amplifies anti-Muslim sentiment. Many news op-eds express the same view: that the bill could intensify polarizing attitudes in Québec.

In A Letter Concerning Toleration published in 1689, Locke argued that the state should stay out of the business of regulating religious expressions. He advocated for the inclusion of religion in public, so long as it did not contradict state laws. He extended religious tolerance to Christian churches, and also Pagans, Muslims and Jewish people.

But Locke’s understanding of tolerance was rooted in Christian logic and informed by his Calvinist upbringing. He held to the idea of “the true religion” and did not believe atheists should receive the same tolerance.

Wendy Brown, professor of political science at the University of California Berkeley, argues that Locke’s premise is culturally condescending: it reproduces a hierarchical relationship between those who do the tolerating and those who must be tolerated.

The use of terms like “neutrality” and “secularism” along with Bill 21’s “laicity” employ the same rhetoric of tolerance espoused by Locke.

Despite the Quiet Revolution of the 1960s, when the role of the Catholic Church was considerably diminished, Québec society retains the cultural residue of Catholicism.

The proposed religious symbols bans make special exemptions for expressions that affirm “elements of Québec’s cultural heritage, in particular, its religious cultural heritage.” This wording allows Catholic symbols, like the crucifix hanging in the National Assembly, to remain. Although the Coalition Avenir Québec (CAQ) government has agreed to move the crucifix, Bill 21 retains this language of exemption.

By putting forward this proposed law, the CAQ positions the state as arbiters of religious authority. They determine which symbols are interpreted as “religious” — and therefore in violation of the law — and which are merely “cultural” expressions of Catholic heritage.

In this way, Christianity remains the invisible cultural default. Unless that default is made visible, Canadian laws will not be able to get beyond the condescending premise of tolerance and move towards genuine inclusion.

(Hannah Dick is an assistant professor at the School of Journalism and Communication at Carleton University. The views expressed in this commentary do not necessarily represent those of Religion News Service.)

News
Trump, confirmed a Presbyterian, now identifies as ‘non-denominational Christian’
News
How Amy Coney Barrett could change the Supreme Court’s balance on religious liberty
Opinion
Amy Coney Barrett’s religion isn’t the problem. It’s her record.
Opinion
The 2020 election’s most crucial faith group is one you’ve never heard of
Opinion
Rihanna’s hadith fashion show moment has some asking: Is Islam too sacred for art?
© Copyright 2020, Religion News Service. All rights reserved. Use of and/or registration on any portion of this site constitutes acceptance of our User Agreement and Privacy Policy, Privacy Statement and Cookie Notice. The material on this site may not be reproduced, distributed, transmitted, cached or otherwise used, except with the prior written permission of Religion News Service.