(RNS) — The plight we are in about climate change can be best viewed in the fierce pushback we’ve seen over the last few weeks to the Green New Deal. It’s not the political opposition it has faced (though, it’s worth noting that senators who support the deal recently refused to vote on it); it’s the personal opposition.

Consider the case of freshman Rep. Alexandria Ocasio-Cortez, who, since becoming the face of the Green Deal, has been subjected to intense scrutiny. A report in the New York Post broke down her 2018 congressional campaign spending and found that her staff, with a subway stop one minute from campaign headquarters in Queens, took hundreds of emissions-spewing rides from Uber, Lyft and other car services in the course of the run and flew 66 times, or more than three times as often as they took Amtrak.

On Instagram, meanwhile, she has been spotted tossing plastic bags rather than recycling them and failing to compost her vegetable peels. PETA even called her team out for not going vegan, arguing that “when animal agriculture is a bigger contributor to climate change than all the world’s transportation systems combined, climate justice advocates have a duty to go vegan.” 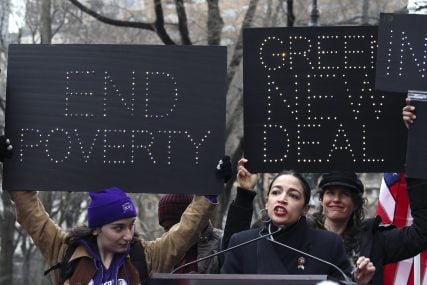 This comes with the territory, perhaps, when you propose a stunning disruption in the life of nearly every American (including, perhaps, that we should rethink having children). But the problem isn’t Ocasio-Cortez, or her team. It’s the very public cognitive dissonance from which most of our eco-leaders and activists suffer: It is difficult to persuade others to suffer through wrenching change when one is not willing to suffer it in one’s own life.

As Washington Post columnist Charles Lane helpfully notes, most Americans generally accept the claims of climate scientists. But as Lane writes, we have a “democratic deficit”: Voters won’t cast a ballot in favor of pain and disruption now for some uncertain benefit in the future.

So while you might color Americans climate-curious, the overwhelming majority of people who say we need to endure a painful new lifestyle are not willing to adopt it themselves.

This plays right into a trope of the right that leftist fretting about climate change is really an attempt to use fear to build a political bridge to future socialist control over every aspect of the economy.

New York Times columnist Ross Douthat rightly points out that the Green New Deal’s insistence on single-payer health care, a universal basic income, free college, food and housing (even, explicitly, for those who are “unwilling to work”), it only confirms such suspicions and makes the GOP arguments in 2020 that much stronger.

Another source of skepticism comes from the Green New Deal’s avoidance of nuclear power. All things being equal, there are good reasons to avoid using this possibly destructive source of energy — but all things are not equal. If we have 12 short years before climate change becomes irreversible, there is no time to worry about where we’ll store nuclear fuel in the long run or about the chance that nuclear plants could be unsafe and even targets of terrorism.

If we are facing a climate emergency, those who are trying to activate us don’t behave and lead as if there is such an emergency. It’s our culture of waste and alienation from the planet that has to change first. 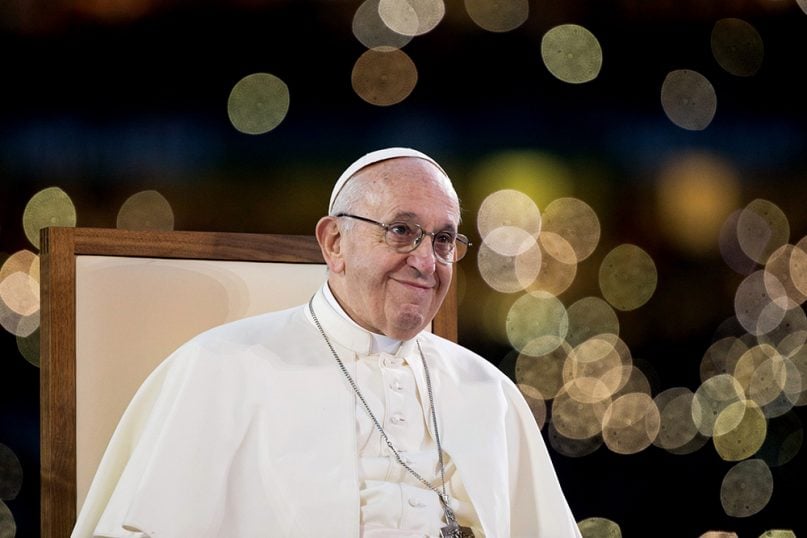 Pope Francis smiles during services at Croke Park, Dublin on Aug. 25, 2018, during the World Meeting of Families 2018. Photo by Maxwell Photography/WMOF2018

We do have a leader on the scene who has been trying to do just this: Pope Francis. He understands that we need to make change in human hearts before we can make change through legislation.

In his great eco-encyclical Laudato Si’, Pope Francis explicitly built on the work of his predecessors in laying the groundwork for a “profound interior conversion.” Instead of slouching toward a “passive” and “inconsistent” lifestyle, Francis calls us to convert and change our hearts.

Both as individuals and communities, in place of a consumerist “use and throwaway culture,” the pope wrote, we must cultivate a sense of “awe and wonder” and “speak the language of fraternity and beauty in our relationship with the world.” It is then that, when “we feel intimately united with all that exists,” a sense of “sobriety and care will well up spontaneously” in us.

That leads to changed lives and changed communities.

A culture change — not unserious new deals or widely ignored climate accords — is where Pope Francis knows our primary focus must be. Indeed, he says, “We should not think that political efforts or the force of law will be sufficient to prevent actions which affect the environment because, when the culture itself is corrupt and objective truth and universally valid principles are no longer upheld, then laws can only be seen as arbitrary impositions or obstacles to be avoided.”

We have 12 years left. For the decade, let us put failed attempts at policy proposals aside — and make an all-hands-on-deck effort to change the culture. Climate activists, rather than trying to get people elected who will not even vote for their own legislation, should focus instead on empowering institutions and practices that are capable of fostering ecological conversion. Especially religious institutions and practices.

Let us also cultivate and share the beautiful stories of people and communities who are resisting throwaway culture. Such stories and personal examples are always more powerful than, say, executive summaries and politically motivated alarms.

Speaking of the power of stories and personal examples, can those of us who say we’re working to mitigate the climate crisis actually live as if they believe it is happening? Vegetarianism. Use of trains and other public transportation. Recycling and composting. Anti-consumerist lifestyles.

Then, with two years to go on the climate clock, we can return to something like a Green New Deal with a changed culture and a genuine hope that it could pass.

Charles C. Camosy is associate professor of theological and social ethics at Fordham University and author of the forthcoming book Resisting Throwaway Culture.