A federal contractor in communications strategy who lives in northern Virginia, Fienberg couldn’t go back to work after the shiva, or seven days of Jewish mourning, were up.

Later she realized she couldn’t cook a Passover seder either.

For a dozen years before the shooting, Fienberg and her mother-in-law, Joyce, had prepared the meal at the heart of the holiday together. Joyce Fienberg was used to cooking the seder meal — a ritual reenactment of the story of the Israelites’ exodus from Egypt — for as many as 25 guests. She always made matzoh ball soup, sometimes three different kinds — her regular recipe, a heartier whole-wheat version, and a gluten-free version.

That was typical Joyce. She doted on her guests and their dietary choices, wanting each and every person at her table to feel cared for and loved. 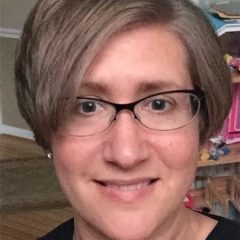 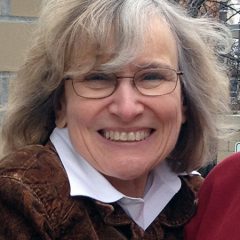 This year Marnie Fienberg will do Passover differently. She has envisioned an ambitious project called “2 for Seder” that has caught on as a way to overcome anti-Semitism by better acquainting non-Jews with the Passover  story of the biblical flight from slavery to freedom.

Using her communications expertise, she partnered with trusted Jewish groups that liked the idea, from the Jewish Federation of Greater Pittsburgh to the Anti-Defamation League.

So far, nearly 700 Jewish families in the U.S. and Canada have signed up, pledging to invite two non-Jews to the Passover feast, which begins April 19.

The idea began a few months after Joyce’s death as a way to honor her memory. The 75-year-old Fienberg was a member of Tree of Life for at least three decades. Her daughter-in-law knew she was there that Saturday, Oct. 27,  as soon as she heard the news that a white supremacist barged into the sanctuary with an assault rifle and handguns and shot dead 11 Jews.

“I was thinking, ‘What can I say to help people do something?’” said Fienberg, who is married to Joyce Fienberg’s son, Howard. “And it evolved into, ‘Invite someone to your seder.’ This is something Joyce did. She encouraged people who didn’t have a place to go. This is what she would have done, and did do for many years.” 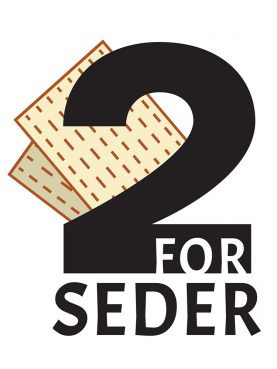 “2 For Seder” is a project to overcome anti-Semitism. Courtesy image

Of course, American Jews have long invited non-Jews to their seders. The meal, at which people read from a liturgy called a Haggadah that tells the story of God’s redemption of the Israelites, is familiar to many.

Over the past several decades, many Christian churches have undertaken seders — some to learn about the Jewish tradition and others as a way of teaching about Jesus’ Last Supper (though historians say Jesus did not attend a seder as it is celebrated today; the Jewish ritual evolved several centuries later.)

But with anti-Semitism on the rise and ignorance about Judaism and Jews growing, Fienberg considered the seder to be a perfect opportunity to discuss how the same fear of outsiders that drove Egyptians to enslave the ancient Israelites may have driven the Pittsburgh shooter as well.

“The seder is meant to inspire us to ask questions, to look at our lives, to look at what it means to be slaves and the struggles involved in that journey,” said Rabbi Evan Ravski, who serves as assistant rabbi at Fienberg’s Congregation Olam Tikvah, a large Conservative synagogue in Fairfax, Va.

When Fienberg shared her idea with him, Ravski quickly signed on to the campaign and offered some guiding questions for the 14-page “2 for Seder” kit that hosts can use to prepare for the evening discussion. He, too, will be attending a seder for 40, including many non-Jews, at his parents’ Connecticut home. That kit also includes a warm greeting from Jeffrey Myers, the Tree of Life rabbi.

This year, Fienberg has decided she can’t cook the seder meal without Joyce.

Instead, she will attend a seder in Chicago hosted by her cousins who have invited their entire neighborhood — including many non-Jews — to join in. Fienberg is still mourning her mother-in-law, whom she described as a “woman of valor,” referring to the Book of Proverbs’ description of a good wife.

A native of Toronto who moved to Pittsburgh when her husband got a job as a professor of statistics at Carnegie Mellon University, Joyce Fienberg was the kind of person who formed deep and long-lasting friendships.

“If you were meeting her for the first time, she stayed in touch with you forever,” Fienberg said. “If she knew you were coming to Pittsburgh, you’d have a place to stay and a wonderful dinner. She made every single person, no matter their background, feel very comfortable.”

It was this quality that made Joyce one of Tree of Life’s greeters. After her husband died of cancer, she started attending daily and joined the synagogue’s board. Knowing the congregation was older and declining, Joyce wanted to make an effort to welcome newcomers.

It’s that ability to reach out to others that Marnie Fienberg wants to emulate — beginning with 2 for Seder.

She recently met with parents and students from last year’s shooting at Marjory Stoneman Douglas High School in Parkland, Fla., and after the white supremacist attack at two Christchurch mosques last month, she felt called to write a commentary for the Jewish Telegraphic Agency.

“To the families that are reeling, I want to say that we in the Jewish community are your siblings,” she wrote.

Now she is searching for a way to do more.

I don’t know how to make this transition to being an activist,” she said. “I’m feeling my way through.” But she added: “We as Jews have a say in trying to stop these tragedies. We have an obligation, a religious obligation, to do so.”