(RNS) — If there’s one religious requirement for Jews at the Passover seder, it’s to impress on young people what it’s like to cross from slavery to freedom.

“In each generation, a person is obligated to see himself or herself as though he or she personally came forth from Egypt,” the standard Haggadah, or manual, recited at the seder table, commands.

Matt (I’m-not-a-rabbi-I’m-a-rapper) Bar has just the thing for the elder crowd at seder.

The Philadelphia-based Jewish educator has developed a “Hip-Hop Haggadah,” with four rap songs designed to draw young people into the holiday ritual.

For Bar, there’s no better way to involve kids than through the rhythmic, rhyming recitation of rap.

Rap, he said, has overtaken rock as the No. 1 most-listened-to music genre in America.

“It fits the Passover vibe of having fun and being a little ridiculous, while at the same time sticking to the purpose of the seder, which is re-creating what it’s like to go from oppression to liberation,” Bar said.

It also fits neatly into the evolution of Passover. The seder ritual, during which Jews sit down at a table to tell the biblical story of Exodus, began to take shape in medieval times, taking the form of a thin book or pamphlet called a Haggadah with hymns and prayers that Jews take turns reciting.

Through the years, Haggadah readings have added various liberation themes, whether it’s the civil rights or LGBTQ movements.

Today, there are hundreds of variations on the standard Haggadah, including “The (unofficial) Hogwarts Haggadah,” “The Emoji Haggadah” and “The Marvelous Mrs. Maisel Limited Edition Passover Haggadah.”

Bar’s approach, he argued, goes beyond recitation. He doesn’t want kids simply to perform songs he has written: He wants young people to add their own lyrics to his lead chorus or beat. His “Experience the Exodus” song, for example, starts off, “Where were you when there arose a new Pha-roah? … Were you really scared, yo!” and prompts participants to add two lines that rhyme with “oh.” 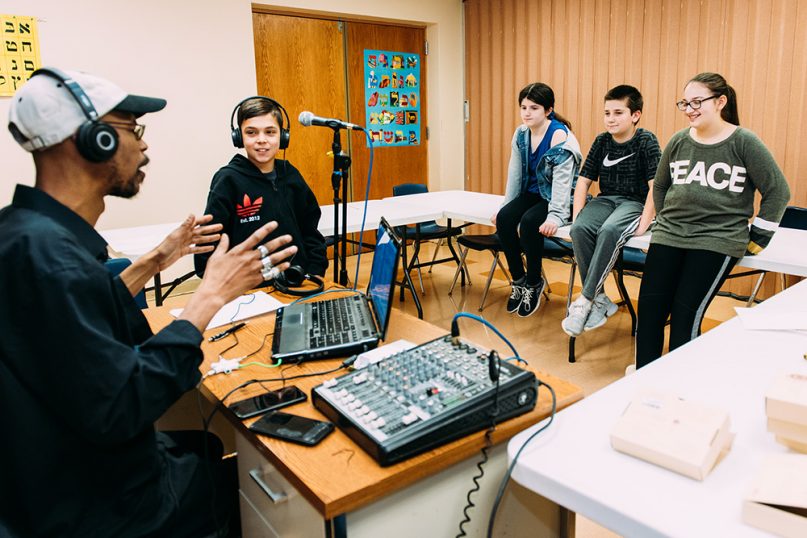 The rap Haggadah is part of a larger venture Bar calls “Bible Raps,” which offers examples and how-to’s for getting young people to use rap as a way to learn about Jewish ethics.

“I see it as a really powerful tool for people looking for creativity or new avenues to connect,” said Rabbi Adam Mayer, who teaches at Kohelet Yeshiva High School in Merion Station, Pa.

Bar believes rap, which began as an African-American context, has a lot in common with Judaism — first and foremost an affinity for words. Rap songs, Bar said, can cram more words into one song than an entire album of rock.

Judaism, with its voluminous oral and written interpretative tradition and its penchant for rabbinic argument, is well suited to rap’s fondness for word play, call and response and especially battle rapping, in which two or more rappers argue in rhyme.

Bar, 39, a native of Iowa City, said he grew up a Bob Dylan wannabe, but later fell for the rapper Lil Wayne. A trip to Israel after college at Washington University in St. Louis altered Bar’s trajectory. When he returned to the U.S., he started teaching Hebrew school to make money and wrote lyrics for a rap band in the evenings. 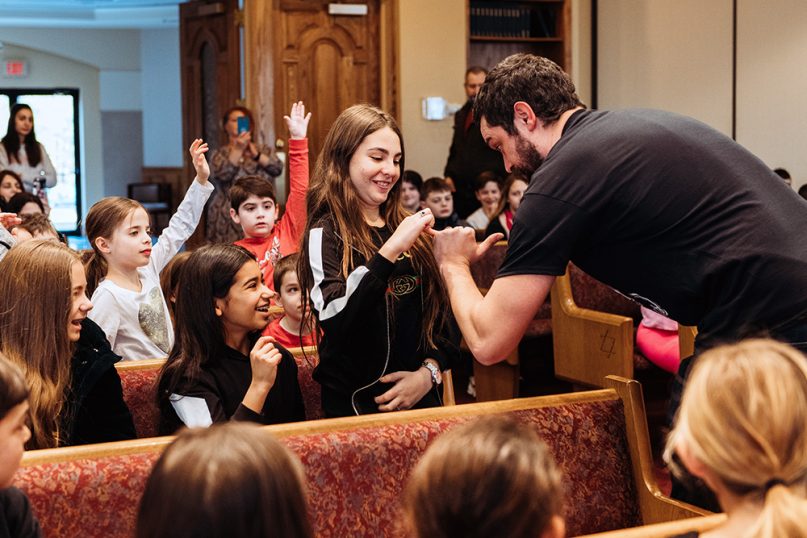 One day, he hit on the idea of incorporating rap in his lessons.

That mostly young white suburbanites have taken to rap is an old story, but Bar said the magic is still there.

Daniel Weiss, who heads the Bornblum Jewish Community School in Memphis, Tenn., said it was obvious to his teachers that rap is a medium that can reach disengaged students.

When Bar came to his school recently to do a workshop, Weiss said, a fourth-grade teacher turned to him and said she needed to incorporate rap in her lessons.

“She was watching her students, some of whom were not engaged or hard to reach, getting into what Matt was doing,” Weiss said. “She saw it as an opportunity for kids who are less connected to engage in a completely different way.”

Bar said he hasn’t run into resistance from Jewish educators or synagogue leaders afraid of rap’s negative reputation and association with gangs and guns.

But he’s also good at prepping them in advance with a joke. The Bible and rap may appear strange bedfellows, he points out: “The one is misogynic, violent, full of killers and concubines,” he quips. “The other is hip-hop.”