In the new film “Mary Magdalene,” the biblical character Mary of Magdala is all of these things and more — but not the one role in which she was historically (mis)cast: the so-called “fallen woman.”

Misunderstood, misinterpreted, and maligned, only in recent years has Mary Magdalene’s reputation been restored, both by official religious decree and in popular consciousness.

In the new film, Rooney Mara’s depiction of Jesus’ closest female follower — “Mary you are my witness,” he tells her after she washes his feet before the Last Supper — is the embodiment of this contemporary (some might say “corrected”) vision of an ancient archetype.

For nearly two millennia, Mary Magdalene’s enigmatic persona has captured the imagination of artists of all stripes, from painters, iconographers and sculptors, to novelists, musicians and poets.

In most of these portrayals, Western art has depicted Magdalene, variously, as a voluptuous ginger-haired temptress, a sorrowful penitent who weeps as she prays for forgiveness and a dutiful follower clutching the foot of the cross on which Jesus suffers or cradling his feet while his mother holds his crucified corpse.

“Mary Magdalene” Director Garth Davis and his filmmaking partners went into their initial stages of research “assuming we would be making a film about a prostitute,” said Producer Iain Canning. “We were just sort of embarrassed and horrified that we’d been part of a mistaken narrative. So that was even more a catalyst and reason to fast-track as much as we possibly could a different interpretation.”

Raven-haired, lithe Mara, who is perhaps best known for her title role in David Fincher’s thriller “The Girl with the Dragon Tattoo,” portrays Mary Magdalene with an almost hushed delivery. Her understated, clear-eyed portrayal lent new dimension to the woman who is at once sacred icon and artistic iconoclast.

The result is a nuanced and quiet, almost contemplative, film where viewers might find themselves leaning in to listen more closely.

The film debuted in the United Kingdom and Europe last year, but its U.S. release was delayed when, in the wake of the #TimesUp and #MeToo movements, producers sought a new distributor to replace the Weinstein Company. The film found a new home at IFC, which released the film on April 12. 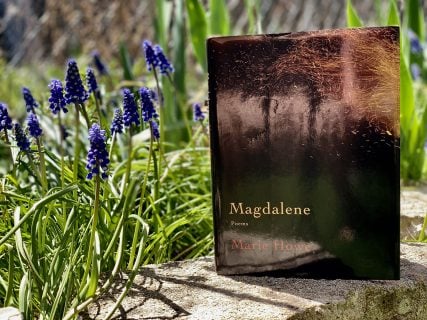 “I’ve been trying to write in the voice of Mary Magdalene for maybe 35 years — it may be my oldest impulse,” said Marie Howe, the former poet laureate of New York and author of the 2017 collection “Magdalene: Poems.”

“Like so many women throughout the Western, Judeo-Christian world, I was compelled by Mary Magdalene because she seemed like me, she seemed recognizable. At the same time, I sensed that the woman I saw in paintings and who was described by priests and church fathers was a lie,” Howe said.

In Howe’s poetry, Magdalene is a kind of everywoman. In some poems she is a mother, in others a single woman and then a young girl. In the poem “Magdalene — The Seven Devils,” based on the biblical passage in Luke that describes Mary of Magdala “from whom seven devils were cast out,” the poet reimagines what those “devils” might have been.

The first was that I was very busy.

The second — I was different from you: whatever happened to you could

The third — I worried.

The fourth — envy, disguised as compassion.

The exorcism of Mary is one of the more harrowing scenes in the “Mary Magdalene” film. What possesses her, as with Howe’s depiction, is less a demon than her having a mind of her own — a “sin” she nearly pays for with her life.

It is while Mary Magdalene is recovering from the would-be exorcism that she first meets Jesus, played by Joaquin Phoenix. “There are no demons here,” he tells Mary, smiling as he places a hand on her forehead. “Rest now. Rest in the light.”

Vermont artist Janet McKenzie has created dozens of paintings depicting sacred and biblical characters, including her well-known 2000 portrait “Jesus of the People,” where the model she used was an African-American woman. 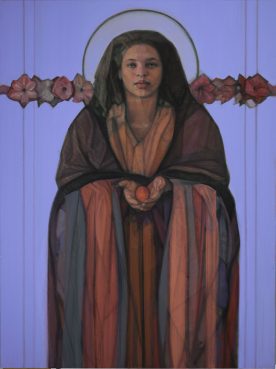 McKenzie’s “Mary Magdalene — Invitation to Love” presents the female disciple as a woman of color draped in violet and rose-hued robes and holding a red egg between her tented fingers, a traditional symbol that “Christ is risen.”

“This is Mary Magdalene for the church of the 21st century,” McKenzie said. “(She) is presented here for the women of the church today who teach the children, raise the funds, clean the pews, comfort the sick and dying, preach the word, preside at the Eucharist and work for justice.

“People of color in particular have been marginalized and systematically left out of sacred art,” she said, “but here Mary Magdalene is front and center, celebrated as a dark-skinned woman… she stands and looks at us, feet planted firmly on the earth.”

McKenzie has left space about Mary’s head at the top of the painting “purposely open-ended” as a “place of unlimited possibility.”

That Mary Magdalene was a prostitute or a woman of ill repute and loose morals is scripturally baseless, a fiction created by Pope Gregory nearly 1,500 years ago, according to Cynthia Bourgeault, the Episcopal priest, modern-day mystic and author of the book “The Meaning of Mary Magdalene: Discovering the Woman at the Heart of Christianity.”

In his Homily 33, in the year 594, Gregory said in part, “She whom Luke calls the sinful woman, whom John calls Mary, we believe to be the Mary from whom seven demons were ejected according to Mark. And what did these seven demons signify if not all the vices? … It is clear, brothers, that this woman previously used the unguent to perfume her flesh in forbidden acts. What she therefore displayed more scandalously, she was now offering to God in a more praiseworthy manner.”

Some feminist scholars view this as a deliberate, systemic effort to undermine the spiritual authority of Mary Magdalene, transforming her apostolacy into apostasy. Bourgeault sees less conspiracy than cultural projection in Pope Gregory’s assertion that Mary the Apostle was a “penitent whore.”

“In an emerging church hierarchy founded on the assumption of male-only and celibate succession from the original apostles, Mary Magdalene’s apostolate was clearly an anomaly and a threat,” Bourgeault writes. Such a portrayal is “primarily the work of the church’s collective unconsciousness” and the “inevitable shadow side of its increasing obsession with celibacy and sexual purity.”

Nevertheless, Pope Gregory’s assertion that Mary Magdalene was a rehabilitated sex worker became and largely has remained her prevailing narrative within Christendom, despite the Vatican officially correcting its official teaching about Magdalene in 1969.

(The Orthodox Church never has taught that she was a prostitute, while the Anglican Church first included July 22 as her feast day in 1549 but three years later deleted it. It would be more than 400 years before her feast day was returned to the Book of Common Prayer.)

In 2016, Pope Francis took the church’s efforts to course-correct one step further, by proclaiming her memorial on July 22 an official feast day on the liturgical calendar. The decree, titled (in Latin) “Apostle of the Apostles,” says that as she was the first witness to the risen Christ and announced his resurrection to the disciples, she should be celebrated with the “same level of festivity given to the apostles” as an “example and model to every woman in the church.”

“A lot of Hollywood films that quote from the Bible can be really bombastic,” Canning said. “We really wanted to let the words speak for themselves… and sometimes even no one do the talking and let the experience wash over people.

“We really wanted to create a film that is, at its very core, about love, forgiveness, charity and understanding,” he said.

Interestingly, Mara and Phoenix, who is 11 years her senior, reportedly have been real-life partners since falling for each other during the filming of “Mary Magdalene.”

“Mary Magdalene was a full apostle of Jesus, one of great brilliance, she walked the talk, which is why he loved her particularly and (why) they were so close. I mean, she really got it. And the film picks up on that absolutely brilliantly,” Bourgeault said.

She found scenes in the film — where Mary Magdalene baptizes women (because they believed social mores precluded a strange man from touching them) and where she has the courage Peter (Chiwetel Ejiofor) lacks to go into a cave to bring water and a merciful touch to dying lepers — especially powerful.

“She’s the apostle not only of a spunky spirit, but the apostle of a transforming love,” she said. “She shows the two are absolutely wedded together in a heart on fire. That’s what we have to have the courage to dig into nowadays if we’re going to answer the angry darkness of the world with the fire of love.”