(RNS) — Standing at the pulpit of a Los Angeles Baptist church in 1972, Aretha Franklin — known more for hits like “Respect” and “Chain of Fools” — started singing her own rendition of “Amazing Grace.”

As she sang the ode to divine deliverance, Franklin prompted members of the congregation at the recording of the gospel album to shake their heads and raise their arms.

The R&B star took on the role of a minister of music as she rendered one gospel song after another.

“You’ve got a mighty good friend in Jesus,” she sings at one point.

“Sing, Aretha,” someone in the church seats shouts.

“Amazing Grace,” the documentary about the making of what would become the best-selling live gospel album, spends 87 minutes giving viewers a chance to see the woman known just as Aretha go back to her roots. The singer, who died at age 76 last year, was first recorded singing gospel music at her father’s church at age 14.

The title track features Franklin’s unique arrangement — almost 11 minutes long — with multiple notes attached to the words “amazing,” “grace” and other words in that time-honored hymn.

“That track was completely free in terms of meter, in terms of rhythm,” said Aaron Cohen, author of “Amazing Grace,” a 2011 book about the recording of the album. “She wasn’t being confined to a two- or three-minute pop song where she has to hit these notes to fill it out. Granted, every song she did she did her way, but more so with ‘Amazing Grace.’” The long-awaited documentary was delayed for almost five decades in part because of technical issues: The film and its accompanying sound were not synchronized when the recording was made. Decades later, digital technicians were able to link them, enabling the documentary directed by Oscar-winning Sydney Pollack to be released.

Now the musical mastery of Franklin’s voice is combined with a bird’s-eye view of the church setting where she recorded gospel favorites while playing a Steinway or standing at a pulpit with a large mural of the baptism of Jesus behind her.

The film captures not only the freedom with which she expresses herself musically, but the call and response between the artist and James Cleveland’s Southern California Community Choir, outfitted in bright silver vests.

“As a singer she was the star but, in that environment, she was also there to serve as well,” said Cohen, former associate editor of DownBeat magazine, who has seen the documentary six times and previously viewed raw footage.

Delores Klyvert, a fan of Franklin’s, said “Respect” is one of her favorites but she got a fuller view of the artist as a woman of faith when she stopped by a movie theater in Washington, D.C., on Good Friday.

“I knew about her father, her church, her religious background,” said Klyvert, a member of a multicultural nondenominational church in Richmond, Va. “It was just that it brought it to the forefront and let me actually connect with it a little better. I knew it but it’s nothing like actually seeing and hearing.”

Near the start of the film Cleveland introduces Franklin by saying “she can sing anything — anything.” But the focus for the two nights of recording and the two LPs of the original album was the genre of gospel.

She sings the first selection, “Wholy Holy,” a cover of a Marvin Gaye song, at the Steinway grand piano, dressed in a long white dress with sequins, eyes often closed.

The film shows a predominantly black congregation, some men dressed in plaid jackets with wide lapels and some women dancing in the aisles, seeming to respond to both the method and the message of Franklin’s music.

“It does capture that emotional immediacy that there is in this kind of church,” said Cohen, “this whole character that is a community just comes so alive in a very vivid way in the film. And it’s about sharing. It’s about sharing an experience.”

As a camera pans the congregation, viewers can spot director Pollack, Franklin’s mentor and gospel singer Clara Ward and the Rolling Stones’ Mick Jagger (who toured with gospel singer Dorothy Norwood in the same year the “Amazing Grace” album was released).

When Cleveland takes his turn at the piano to accompany Franklin, he adds more about her background.

“You know being a daughter of a Baptist minister, you had to know these hymns before you could do anything,” he said.

In the middle of the slow-moving “Precious Memories,” Franklin sings, “We ought to sing that one more time.”

Her father, the Rev. C.L. Franklin, was in the audience for the recording. In one poignant moment, he stands over his daughter seated at the piano and mops the sweat from her brow. 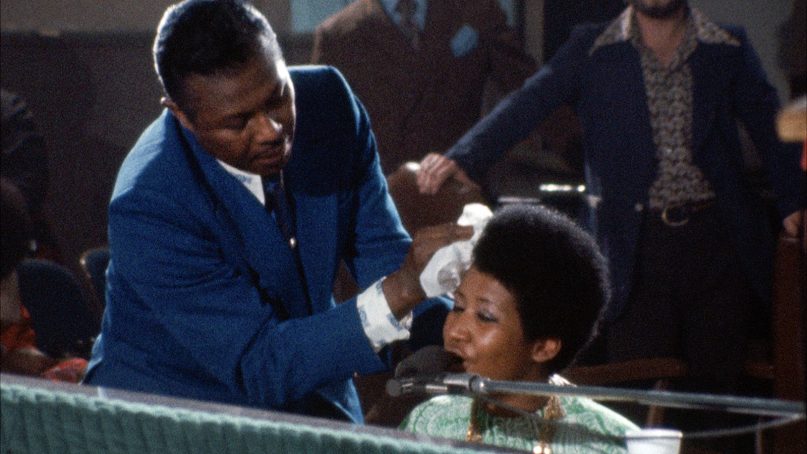 The Rev. C.L. Franklin wipes sweat from his daughter Aretha’s forehead during the 1972 recording of her “Amazing Grace” album in Los Angeles. Photo courtesy of NEON

At another point, her father recounts a story of his trip to the dry cleaners where the proprietor speaks of missing Aretha’s involvement in church music.

“If you want to know the truth, she hasn’t ever left the church,” he said.

More than seven months after her death, Franklin is getting renewed attention on the big screen and beyond. On April 15, she was awarded a posthumous Pulitzer Prize for “her indelible contribution to American music and culture for more than five decades.”

A week later, on Easter Sunday, BET aired the Stellar Gospel Music Awards at which singers Regina Belle, Erica Campbell and Kelly Price sang in tribute to Franklin and her family was presented with the inaugural ICON Award in her honor.

The “Amazing Grace” documentary was shown at about two dozen locations across the country on Easter Sunday, followed by a live-streamed address of the Rev. William J. Barber II, who has co-led a revival of the Rev. Martin Luther King Jr.’s Poor People’s Campaign, from Barber’s North Carolina church. A representative of the film said theaters in Austin, Texas, and Brooklyn, N.Y., sold out.

“When we relaunched the Poor People’s Campaign in 2018, Aretha called me to pledge her support,” said Barber in a promotional video about the film. “You are about to hear and see the queen of a gospel tradition that was forged in the fires of America’s worst injustice. This music has sustained millions through many dangers, toils and snares. It not only kept them. It moved them, like it did Aretha, to stand for justice.” 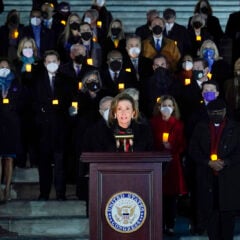