WASHINGTON (RNS) — With its particular focus on China’s oppression of religious and human rights, an independent watchdog group has decried in its annual report the state of religious freedom across the globe.

The U.S. Commission on International Religious Freedom, a bipartisan organization created 20 years ago, concludes in its Monday (April 29) report that “innumerable believers and nonbelievers across the globe continued in 2018 to experience manifold suffering due to their beliefs.” 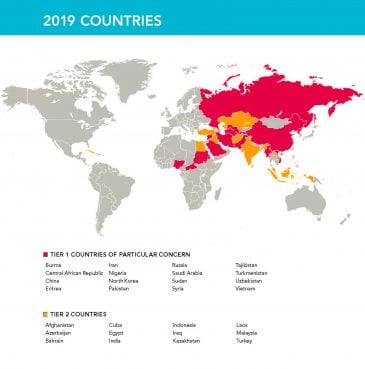 A map of the countries the U.S. Commission on International Religious Freedom recommends as 2019 Countries of Particular Concern. Courtesy USCIRF

While the State Department’s annual international religious freedom report covers every nation in the world other than the U.S., USCIRF annually documents fewer than 30 countries that have the most significant religious freedom violations.

The State Department designated these countries as CPCs in November.

The commission adds that it has given 12 other nations its Tier 2 designation for the next most serious level of religious freedom violations: Afghanistan, Azerbaijan, Bahrain, Cuba, Egypt, India, Indonesia, Iraq, Kazakhstan, Laos, Malaysia and Turkey.

In addition, the commission is calling on the State Department to list five nonstate actors, or organizations outside a government’s control, as “entities of particular concern”: the Islamic State of Iraq and Syria, or ISIS; the Taliban in Afghanistan; al-Shabab in Somalia; Houthis in Yemen; and Hay’at Tahrir al-Sham, or HTS, in Syria.

China, along with Russia and Sudan, has been a focus of the watchdog since 1999 as it prepared to cite religious freedom violators in its first annual report the following year.

RELATED: US Muslim leaders call on China to end persecution of Uighurs

“Nearly 20 years later, Muslims are constantly surveilled, their phones confiscated and scanned, their skin pricked for blood samples to collect their DNA, their children prohibited from attending mosque,” reads the report’s introduction. “Even worse, the Chinese government has ripped entire families apart, detaining between 800,000 and two million adults in concentration camps and relegating some of their children to orphanages.” Boys from the Uighur community living in Turkey take a break to pray during a rally in Istanbul on Nov. 6, 2018. The group, carrying flags of what ethnic Uighurs call “East Turkestan,” protested against what they allege is oppression by the Chinese government to Muslim Uighurs in China’s far-western Xinjiang province. (AP Photo/Lefteris Pitarakis)

The commission calls for the U.S. government and others across the globe to sanction Chinese agencies and officials for their role in serious religious freedom violations and to urge them to set Uighur and other Muslims free. It also calls for the release of prisoners of conscience, including Muslims, Buddhists and Christians.

At a Capitol Hill news conference announcing the report, USCIRF Commissioner Gary Bauer said China has been listed by the commission as one of the most egregious “Tier 1” countries for religious freedom in each of its 20 reports.

“If we were to rate the Tier 1 countries, China would be in a category all by itself,” said Bauer, president of American Values, a public policy think tank. “The level of persecution — they are an equal opportunity persecutor. They go after anybody, any sect that might compete with the communist, atheistic government of China.”

Other countries beyond China are also highlighted, including Vietnam, Sudan and Tajikistan, which the report says are suppressing religious freedom and permitting persecution. The commission cites Eritrea and Russia along with China as examples of countries that brand religious minorities as “extremists.”

“In 2018, both state and nonstate actors increasingly used religion as a tool of exclusion to isolate, marginalize, and punish the ‘other’ through discrimination and violence,” the report states, citing blasphemy laws in Saudi Arabia and Pakistan as examples.

The report notes religious freedom successes — including the release of Pastor Andrew Brunson, an American evangelical, from a Turkish prison — and continuing challenges for the Trump administration.

“Longstanding flaws in the U.S. government’s processing of asylum-seekers at ports of entry and the border remained unaddressed,” it says.

USCIRF Vice Chair Gayle Manchin said at the news conference that despite many negative trends in international religious freedom there have been positive developments even among countries the commission considers top offenders. She cited the case of Mohammad Ali Taheri, a cognitive researcher and founder of a spiritual group in Iran.

“He had been imprisoned for his beliefs since 2011 under various charges and sentences, including twice having been sentenced to death,” said Manchin, former first lady of West Virginia. “We obviously were thrilled to learn just last week that he has been released.” 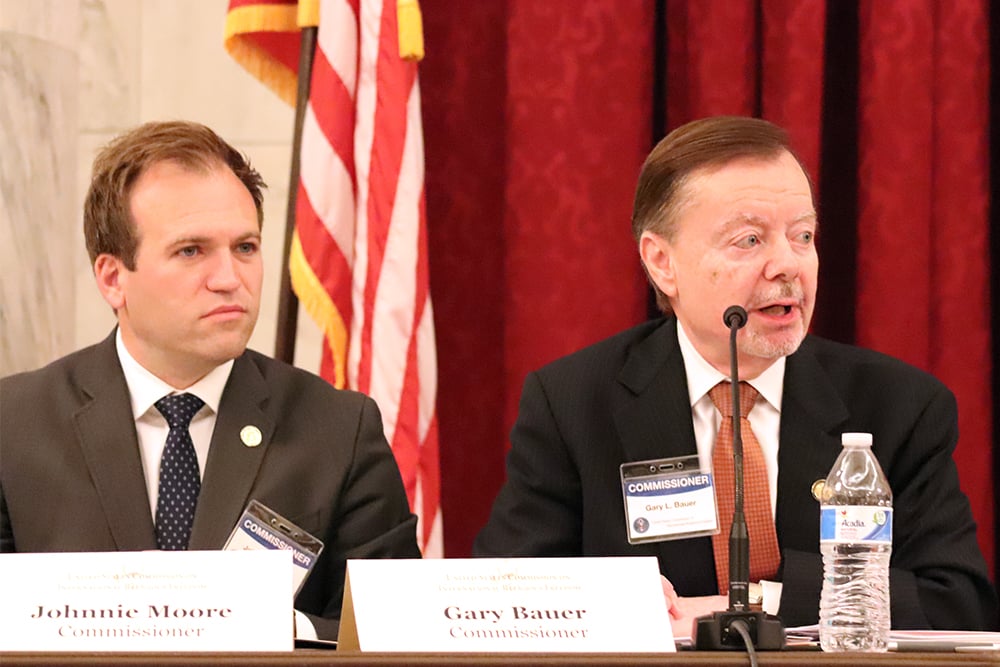 USCIRF Commissioner Johnnie Moore added that commissioners were able to meet for the first time in 2018 with the religious police (officially called the Commission for the Promotion of Virtue and Prevention of Vice) of Saudi Arabia, another country ranked in the top tier of religious freedom offenders.

“It’s a kingdom where there are lots of different things happening, some things that are the worst in the world, and at the same token there is a glimmer of light,” said Moore, who has served as an unofficial spokesman for the group of evangelicals who have prayed for and met with Trump. “And we’re trying to do what we can to shimmy open that door.”

The commission recommends that the administration appoint a special adviser on international religious freedom to the staff of the National Security Council. It also seeks an increase in the use of sanctions to target government officials, military units and agencies that are severe religious freedom violators. And USCIRF requests that the U.S. Agency for International Development and the State Department assist countries in providing textbooks and other training materials that describe religious groups accurately.

The report, issued after recent attacks on mosques in New Zealand and churches in Sri Lanka, also calls for the administration to set aside money for the department of State and Defense “to train and equip local officials and communities to protect places of worship and other holy sites, especially in countries where such sites face a high risk of attack.”

USCIRF Commissioner Tony Perkins said in an interview that his visits to Egypt and Nigeria after other incidents involving houses of worship were catalysts for the commission’s determination to see countries work with their law enforcement officials on prevention. But the most recent attacks demonstrate how action is needed more than ever, he said.

“That recommendation pre-existed these most recent attacks,” said Perkins, who is also president of the Family Research Council and a former police officer who was an anti-terrorism consultant with the State Department in the 1980s and ‘90s, “because we see this as a growing trend.”