“We would love to go back. We love the people because we believe God loves the people there and we want to show God’s love to them,” he said Wednesday (Feb. 6), recalling fondly the decades he and his wife spent there before he was sent to prison on terrorism-related charges the U.S. declared were false.

“We spent 25 years in Turkey and someday we hope the conditions will be right for us to go back,” he said.

Brunson, who had pastored a small church in the coastal city of Izmir, spoke briefly at a reception in his honor hosted by the U.S. Commission on International Religious Freedom, an independent nonpartisan watchdog.

Brunson recalled that USCIRF commissioners were among the first people to visit him in prison after his arrest in October 2016. The North Carolinian said the commissioners helped him to know that he was not forgotten during his time in prison.

“It was a real boost to me and encouraged me,” said Brunson, adding that one of the commissioners at the time, Sandra Jolley, brought him an illustrated Book of Psalms, “which was a comfort to me over the rest of my time there.”

Brunson was moved to house arrest in July 2018 and freed by a Turkish court a few months later in October. 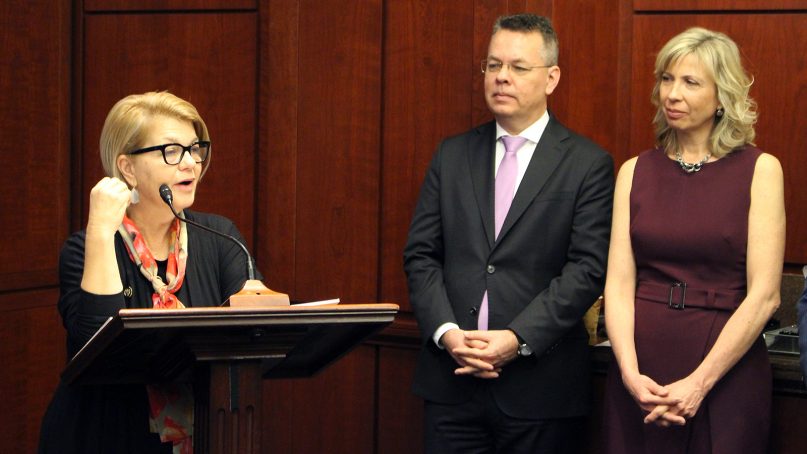 Sandra Jolley, former commissioner of the U.S. Commission on International Religious Freedom, speaks about the Brunsons and their experiences on Feb. 6, 2019, in Washington. Photo courtesy of USCIRF

His wife, Norine, added that they realize that “not all stories end the way ours did.” She expressed her appreciation for the support they have received.

“We are grateful for all the efforts, all the prayers and in the end,” she said, “we have to give glory to God.”

Her husband also expressed his concerns about people of Christian and Muslim faiths who he believes remain imprisoned unjustly in the Muslim-majority nation.

“I have many friends in prison in Turkey now who should not be in prison and many families have been destroyed,” he said.

Andrew Brunson, who plans to publish a book in the fall about his experience, also noted that there are other Americans detained in Turkey who need to be remembered.

“I hope that there will be continued interest in getting them released,” he said. “I don’t think any of them are guilty either.”

Commissioner Tony Perkins, president of the Family Research Council, spoke of his fellow commissioners’ advocacy for Brunson and how he had been at a hearing that led to Brunson’s release.

“I had the privilege and the honor of being there in the courtroom when the unexpected occurred,” said Perkins. “But I think a lot of folks across the country of different religious backgrounds and traditions had been praying for Pastor Andrew Brunson and we had the privilege of seeing those prayers answered as I accompanied the Brunsons home back here to the United States in October.”

Commissioner Gayle Manchin, vice chair of USCIRF, stressed that the efforts to bring home detained people is a human struggle that supersedes politics.

“Many of us in this room are mothers and fathers and so I ask you to pause just for a minute and reflect on the fact that this weekend the Brunsons’ daughter is getting married and Rev. Brunson will be there to walk his daughter down the aisle,” she said. “They will be a family living in freedom again.”