WASHINGTON (RNS) — Secretary of State Mike Pompeo has reiterated Trump administration promises to continue to work for the release of American pastor Andrew Brunson, who has been held in Turkey for almost two years.

“We are sparing no effort to return Pastor Brunson home to the United States,” Pompeo said Friday (Sept. 21) at the annual Values Voter Summit attended mostly by Christian conservatives from across the country. “The work is important. He has been wrongly held and his proper place is to be able to return here to once again practice his faith in our great nation.”

In August, the Trump administration sanctioned two high-level officials in Turkey for what it says is their role in the case of Brunson, who faces terrorism-related charges.

Pompeo’s speech, which was met by applause, was part of a focus on international religious liberty on the first day of the three-day summit organized by Family Research Council Action.

Brunson’s daughter, Jacqueline Furnari, spoke shortly after Pompeo’s remarks during a panel discussion on the issue. She said her family awaits her imprisoned father’s next court date on Oct. 12. He has been charged with “Christianization,” which he denies.

She recounted how her father, who has lived in Turkey since 1993 and pastored a small Protestant church there, was called to a police station where he thought he would be reapplying for a residence permit. He was detained, denied a lawyer for two months, and later imprisoned in a cell made for eight that sometimes held 22 people. He has been on house arrest since July.

She said typically non-Turks might be deported but not imprisoned the way her father was.

“The entire last two years has really shown that this is just baseless charges,” she said. “It’s a sham trial and my dad is being used as a bargaining chip and suffering for Jesus Christ.”

Since her father’s detention, Furnari said her family has marked her college graduation, her marriage, and the death of one of her grandfathers.

“Throughout this entire time, my dad has been unable to be with his family,” she said. “It’s what has hurt him the most, is having that time stolen from him — watching his children grow up, helping my brothers make their decisions as they go on in life. It’s been a painful time and we’re just ready for it all to be over.”

She spoke of her father’s reliance on his faith and said it led him to publicly forgive those who testified against him and to say “Blessed am I as I am slandered” during his July 18 court appearance.

“It is an incredible testimony and I cannot be more grateful for his example,” she said, drawing applause. “And at this point, all that we can do is just continue praying. I ask that all of you pray for my dad’s release and pray for others who are persecuted for their faith.” 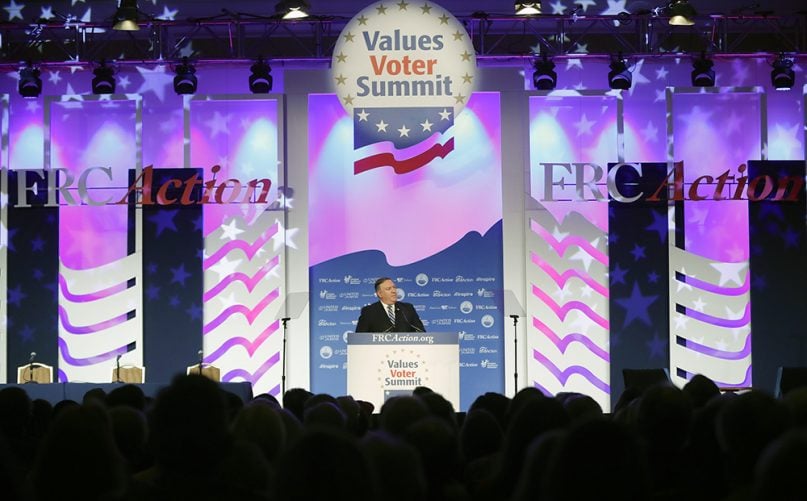 Vice President Mike Pence added in a speech on Saturday at the summit that “we will never stop fighting” until Brunson is freed, drawing applause and cheers. “We will not relent until Pastor Andrew Brunson is home with his family in the United States of America.”

In his remarks, Pompeo drew a standing ovation when he said: “Far and away, the greatest highlight to date of my job as secretary of state was bringing home three Americans from captivity in North Korea.”

He read a notecard he received from the former prisoners that quoted Psalm 126 about the laughter of returned captives.

“On the day Pastor Brunson returns just like the men I spoke of a bit ago,” Pompeo said, “again our hearts will be filled with joy.”

Some former diplomatic officials questioned whether it was appropriate for the secretary of state to appear at a summit that traditionally features Republican luminaries and is viewed as being partisan.

“There were some folks who didn’t want me to come here today,” Pompeo said. “But it seems to me only natural that an American secretary of state would come to talk to you about America’s values and interests. And I know that religious freedom is important to each of you and it’s important for me to be here to talk to you.”

At a summit gala on Saturday, participants honored former Republican congressman Frank Wolf with a leadership award. FRC Action President Tony Perkins, a commissioner of the U.S. Commission on International Religious Freedom, said Wolf, who 20 years ago sponsored the International Religious Freedom Act, was recognized for his longtime advocacy “for those that are being persecuted simply because of their faith.”